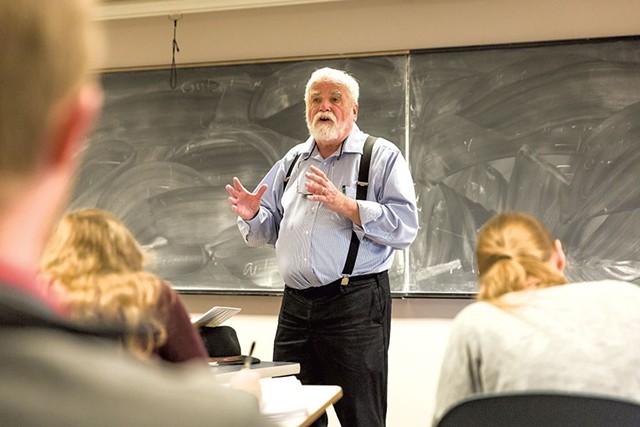 Forgive me if I don't remember all the details; this story dates back 37 years. Ronald Reagan had not yet ousted Jimmy Carter from the White House. I was in the second semester of my freshman year at the University of Vermont when I took Garrison Nelson's political science class. Always ready with a yarn, he made the minutiae of congressional research seem interesting and important.

But Nelson was also over-the-top and insulting. And he stayed that way throughout the 13 years I wrote about Vermont politics.

I quoted Nelson many times — but only after hearing him out about how lame, shallow and pathetic the media was. Nobody gave better sound bites than the guy who called former governor Howard Dean "an arrogant, ill-tempered schmo who does not play well with others." When U.S. Sen. Bernie Sanders (I-Vt.) ran for president, Nelson told the New Yorker, "Bernie's the last person you'd want to be stuck on a desert island with. Two weeks of lectures about health care, and you'd look for a shark and dive in."

In September, I noticed that Nelson was doing a book signing. Is he really still teaching? I wondered.

Indeed, he replied to my email. But, he said, after 50 years, 13,450 students and 1,000 media interviews, he was delivering his last lectures this semester. He included a detailed summary of the triumphs and travails of his career — the bosses he ticked off, the colleagues he defended, all the times he nearly got fired, how he cared more about his obscure research than national media interviews.

That's a story, I thought. This professor, who has simultaneously been charming and chafing to generations of UVM students, Vermont politicians and journalists, was stepping down after half a century.

Then, true to form, Nelson ping-ponged from his charming self to the chafing one. He had no time for an interview, he said. He hung up on me when I called. I texted back: "But seriously. Are you saying you won't talk?"

He would, ultimately, walk back from his tirade and agree to cooperate if I waited a few weeks. In fact, when I showed up unannounced at his UVM office to make sure, he went on for the next hour, recounting stories of his decades-ago efforts to defend fired UVM professor Michael Parenti and plugging the book he'd finished earlier this year on the obscure former U.S. House speaker John McCormack. When I realized this was turning into the interview we hadn't yet scheduled, I hit the record button on my phone.

Two weeks later, I returned to attend one of his classes. Just as I had 37 years before, I sat in a Lafayette Hall classroom listening to Nelson regale students with stories of presidents past. He's mellowed, I thought, as he doled out York Peppermint Patties. Instead of insulting them, he's trying to win their love.

Then, a day before my story was scheduled to run, he was combative again. He warned me not to ruin his reputation. This from a man who had no qualms about trashing the reputations of others. After publication, he emailed again to say I did OK. He hoped I had gotten a good grade in his class. I did: an A.