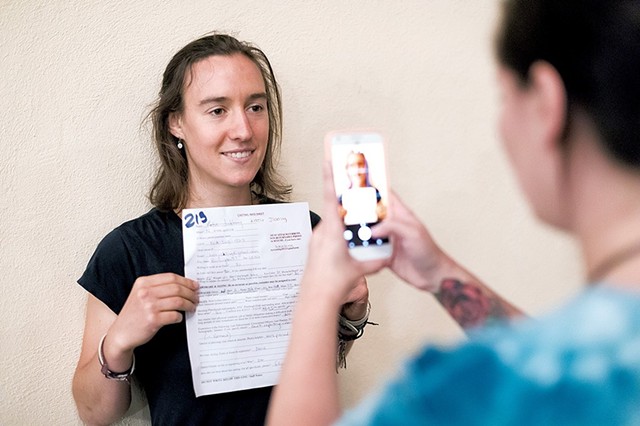 In July, Seven Days sent me across the lake to write a "being there" piece on the casting call for "Escape at Dannemora," a Showtime series based on the dramatic prison break there in 2015. Ben Stiller would be directing it.

I didn't just report on the Plattsburgh, N.Y., auditions; I actually tried out, not fully understanding what I had gotten myself into. Six weeks later, when I had all but forgotten about the experience, I got two calls from "Kate from 'Escape at Dannemora'" instructing me to report to a location in Cadyville, N.Y., the following Monday at 5 a.m.

The casting directors wanted me to be an extra in the production, playing a forest ranger.

I have no experience as an actor or a law enforcement officer. But the two follow-up emails I received that day insisted I was "super important." I had been "hand-selected" for my part.

I felt obligated. In order to get to the appointed meeting place on time, I left the night before and drove to a parking lot in the middle of nowhere. I folded down the back seat of my Hyundai Elantra and curled up with my legs in the trunk. I slept like that until a New York state trooper rapped on my window at 2 a.m.

I guess I'm lucky he didn't shoot me while I extricated myself from the sleeping bag, climbed into the front seat, unlocked the car and rolled down the window to explain.

After informing me that sleeping there wasn't against the law, he left.

By the time my alarm sounded at 4:45 a.m., the parking lot was crowded with cars. Throngs of men milled about clutching Styrofoam cups of coffee, waiting to play small law enforcement parts in the television reenactment.

We waited in line to sign in, then for costumes and hair styling, and, later, for a bus.

I got a green uniform, army boots and a rubber gun that fit neatly in a holster. A fellow forest ranger agreed to snap my photo — for bragging rights.

We spent the next 12 hours shooting three scenes as countless assistants orchestrated the mass of amateurs, actresses, staff and film crew. Cops — real and pretend — circulated, blocking traffic or "searching" for the escaped inmates.

My big moment? In one scene, I walked briskly down the street, encountered a female reporter and brushed off her request for an interview — again and again. The role reversal was perversely pleasurable.

Director Stiller was there, in his signature sweatshirt and Converse sneakers; attendants applied and reapplied makeup for Bonnie Hunt, who was playing the district attorney.

I got back to Burlington at 10 p.m., exhausted.

Two days later, I got another call: Would I come back? I turned them down.

Stiller would have to make do without me.