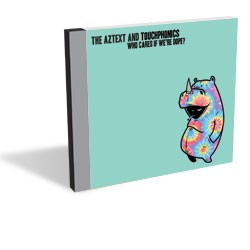 To the floods and flower buds of spring, Vermont hip-hop trio the Aztext emerge from the studio with the third volume of their serially released Who Cares If We’re Dope? A five-track installment of a four-EP project that began with December’s Vol. 1 and continued with an early 2011 sequel Vol. 2, Who Cares If We’re Dope? Vol. 3 channels all the buzz and energy of a thawed-out Green Mountain State.

Produced by Romanian beatmaker XPL, Vol. 3 is a departure from the futurist soundscapes of the second installment — produced by Touchphonics, of VT expats the Loyalists — and the sometimes frenetically paced Vol. 1 — produced by E-Train, also of the Loyalists. The soulful samples and funky beats of this latest episode provide a comfy nest into which MCs Pro and Learic lay their lyrical eggs.

And it’s on the highest branches of the hip-hop tree that the Aztext do their thing. A single line from opening track “Ol‘ Skool” sums up the group’s high road and wistfully truthful approach to their music: “Hate-rap / With every new Kanye track / it only gets worse / got me dreaming of an ADAT.” Vol. 3 conveys a yearning for the purer, more innocent days of hip-hop before corporate greed capitalized on — and then force-fed us — the bombast and self-aggrandizement that characterizes so much of the genre’s mainstream scene today.

The past, present and future become thematic fodder for the cleverly conceptualized “Down the Road (Part 1),” in which the speaker has a chance encounter with an aged version of himself and must decide whether or not to find out how his life ends up. In a cool twist worthy of a Focus Feature film, the concept is reprised on “Down the Road (Part 2),” only this time told from the point of view of the aged rapper. The sci-fi slant of the two tunes does not overshadow a well-delivered insistence that we embrace the uncertainty of the present and future and do what we love, regardless of possible outcomes.

The solid but underwhelming “Break It Down” features guest rapper Skilltester Stabbone and unfortunately relegates itself to afterthought status. The hook is forgettable, the repetitive string-sound sample more sleep inducing than groove setting. It’s a testament to the strength of the other four tracks that this one so underperforms.

“Nothing I Say,” featuring guest rapper Memms, shows off the Aztext’s sensitive side. A love song of sorts, the ballad impresses with its attention to melody, both in the hook and the verses, which are more sung than spat. MCs who can hit notes (and harmonize)? Dope, indeed.

The Aztext perform their first live show in almost a year on Thursday, May 19, at Club Metronome in Burlington.