The Aztext, The Sacred Document 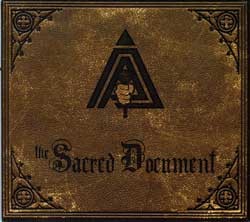 The Vermont hip-hop hit parade just keeps rolling. In the last six months, urban music aficionados have been treated to a slew of local releases featuring bombastic beats, killer cuts and phenomenal flow from some of the area’s best and brightest. VT Union’s Tha Mixtape, GTD’s Ill Sessions: The Album and a self-titled debut from Essex MC Matty C have set the beat-dropping bar exceptionally high in the realm of local hip-hop. But it could be argued that Burlington trio The Aztext beat all three releases to the punch with their critically acclaimed 2006 debut Haven’t You Heard? Not to be outdone — by themselves or anyone else — the B-town boys are back with a remarkable follow-up, The Sacred Document. Hip-hop hooray, indeed.

Centered around the formidable lyrical skills of MCs Pro and Learic — with more than a little help from DJ Big Kat — The Aztext pick up where they left off on one of this newspaper’s “Top Ten Albums of the Year” in 2006 — and make a strong case for a repeat in 2007. This time around, they’ve employed the talents of some regional A-list luminaries to showcase their talents.

The deft verbal acrobatics that garnered their first disc such high praise are on full display throughout the record. In fact, it’s possible Pro and Learic are an even more dexterously dynamic duo than they were when they checked in a year ago. They’ve honed their rhyming abilities to a razor-sharp point, seamlessly flowing in and out of each other’s lines, and promptly serve notice on the album’s first full track. Aptly titled “We Back,” it was produced by local hip-hop impresario Nastee of VT Union.

Nastee’s work on the song — and a few others throughout the album — highlights one of the disc’s great strengths: production. Featuring turns by some of the region’s most respected and accomplished producers, The Sacred Document sets itself apart. Dub Sonata, Special Weapon and The Loyalists’ E Train and DJ Touchphonics all take turns making beats, the result being one of the more sonically diverse local albums you’ll hear — hip-hop or otherwise. Touchphonics’ work is particularly inspired — his turntable cuts on “Rollcall” are simply sick.

The Aztext aren’t merely one of the area’s best hip-hop acts. They’re one of the best local groups, period. Catch their CD release party this Saturday at Nectar’s, hosted by E Train and with special guest performances by Double AB, Wombaticus Rex, Burnt MD and Network, The Truth and DJ Anubus.