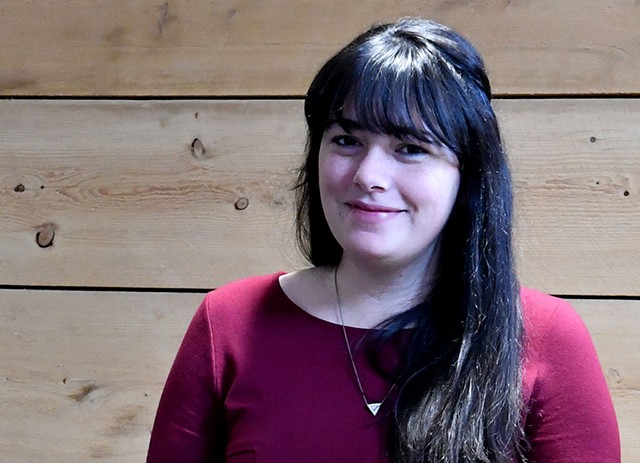 Here's some bad news: You are not as cool as you think you are. What's more, you never have been and probably never will be. But there is good news: No one else is, either. And not only is that a wonderful and affirming thing to realize, it is also comedy gold.

That's the central principle behind Cringe! A Night of Hilarious Humiliation, the monthly comedy series curated by Annie Russell. Every month, the Burlington-based comedian, podcast host and Vermont Public Radio producer invites an assortment of locals to relive sordid pieces of personal history. Artists, musicians, comedians and "regular people" alike reveal the kinds of wince-inducing skeletons most people would prefer to keep bound and gagged in a locked closet.

While Cringe! is indeed hilarious and often features comedians, it is not a comedy show in the traditional sense. Performers don't rely on established routines or jokes, as they would at a standup show. In fact, they're not really "performing" at all, but simply sharing embarrassing nuggets from their pasts. These can take the form of maudlin diary entries, well-intentioned but lousy art projects, bad songs, cheesy childhood home videos or, really, almost anything that evokes embarrassment.

Participants don't have to be funny, just honest, earnest and willing to be exposed. When they oblige, the result is a unique comedy experience that's as gut-busting as it is stomach-turning — for performer and crowd alike. A holiday-themed installment of the show, Cringe! Holiday Humiliation, will take place at the Monkey House in Winooski on Tuesday, December 13.

"One of the rules is that it needs to be something that you put out into the world earnestly at one time," says Russell, 32, outlining what makes something Cringe!-worthy. "It can't be a funny story that you're telling now with perspective. It has to be genuine and something that really pulls you into that moment." Russell pauses and then adds, "My diary has a lot of those moments."

She's not joking. Russell, a New York City native who moved to Vermont three years ago, opens every Cringe! with a submission of her own. Often that means reading an entry from her eighth-grade diary.

"It's a ridiculous piece of writing," says Russell, who describes the journal as mostly composed of "snide remarks about classmates." It also includes a diagram of who liked whom in her class — with commentary. "It's basically me bragging about how great I was," she says. "What a sociopath."

Sociopathic or not, the diary was the accidental inspiration for the Cringe! series. Like so many embarrassing stories over the years, it all started one night at Franny O's.

Nicole Sisk - Christmas Tis Day
Nicole Sisk's childhood Christmas poem. Live at Cringe, September 2016.
Update Required To play the media you will need to either update your browser to a recent version or update your Flash plugin.

About a year and a half ago, Russell guest-hosted a weekly comedy open mic at the infamous South Burlington dive bar — since renovated and reopened as the decidedly more wholesome Sugarhouse Bar & Grill. The open mic was rarely attended by anyone but comedians. And it competed against a weekly pool league.

"We got heckled a lot," Russell recalls.

One night, looking to spice up the meager open mic, Russell instituted a prize for the best joke of the evening, as judged by herself. She also added a punishment for the worst joke: The offending comic would be forced to read an entry from her then-recently rediscovered diary. The relic was a hit.

"Based on the response from that, in a room of 10 comedians, I realized, Oh, this is a thing," she says. Soon after, she approached the Monkey House in Winooski with a "vague idea" for an unconventional comedy show. Cringe! was born.

Russell hosted the first Cringe! at the Monkey in September 2015. She calls it "one of the best nights of comedy I've had in Vermont." It also featured what Russell considers to this day to be the "most cringe-worthy thing I've ever presented."

The presentation in question was a one-act play called "She Kissed Me." Russell wrote it as a broadcast journalism student at Columbia University and even won an award for it.

"I thought it was this brilliant portrait about date rape," she says, likening the play's vibe to a cross between an episode of "Law & Order: SVU" and the 2004 mumblecore film Garden State. "Needless to say, it was awful."

Russell enlisted local comedians Grant Robin and Lori Goldman to read the play onstage. Neither had been allowed to see the script earlier, which lent the reading a palpable air of unease.

"It was truly preposterous," says Goldman. "It was really hard to get through, because each line was more absurd than the one before."

The play is set up as a conversation between a man and his therapist, Goldman explains. "The first line is something like, 'Why are you so upset about Angela?' And then the man says, 'Well, because she killed herself,'" Goldman recalls. "That's just the jumping-off point. It gets way worse from there."

"I was crying of embarrassment," says Russell of the Cringe! reading. "That's when I knew [Cringe!] was a special thing."

Russell refers to Goldman, who is now pursuing comedy in New York City, as the "Queen of Cringe." That's a title the latter accepts, albeit uneasily.

"I guess I'm proud of that," says Goldman, who has performed at more Cringe! shows — three — than anyone besides Russell. Her performances have included reading from her own diary and showing a video of her ill-advised stab at performance art.

"Performance art was something I thought I could do at one time," Goldman says. "It turns out that I can't."

Her familiarity with Cringe! gives Goldman a unique perspective both on why the show works as comedy and on its potential to be personally and artistically affirming. She cites Russell's play as an example.

"While the play was truly an embarrassment for the craft of writing, I saw it more as a milestone in [Russell's] development into the creative person she is today," says Goldman.

"We've all made stuff that we thought was really good at a certain time," says Russell. "Then you grow out of that phase or taste, and you look back and think, Ugh. That's something I think a lot of artists can relate to."

Paddy Reagan agrees. He's the front man of the Burlington band Paper Castles and a founding member of Waking Windows Presents, the local booking collective that hosts the annual Waking Windows music and arts festivals in Winooski and Portland, Maine. Cringe! was featured at both festivals this year.

Reagan participated in a Cringe! show in March. (Full disclosure: I was part of the same show.) He presented a song that his college jam band had recorded roughly a decade ago — a 17-minute epic of aimless noodling over a single repetitive groove. It was excruciating. Both for humane brevity and comedic effect, Reagan broke up the tune into smaller snippets, injecting wry commentary between them: "So that section goes on for, like, six more minutes..."

"The epic jam is something that every teenage jam band does," says Reagan. "You write a song that you think is super original, and then it turns out that it's the same thing that everybody else is doing."

It's not just artists who find Cringe! relatable. While Russell populates the series mostly with local comedians and musicians, nonperformers are also encouraged to send Cringe!-worthy submissions through her website.

Kevin Lumpkin is a Burlington lawyer who took part in a Cringe! show earlier this year. Aside from some performance experience in high school and college, he's an artistic layperson. He read a story he'd written in fourth grade called "My Cat's Typing!!!!"

"It was a fiction story about waking up and finding out my cat is an alien and then going on an adventure with him," explains Lumpkin.

When he presented the story at Cringe!, Lumpkin says, he simply read it aloud. No intro, no commentary — just the story, typos and all.

"I thought it was so funny there was no way it wouldn't get laughs," he admits. "I didn't know if that would mean laughing at me or with me, though."

That's a common fear among Cringe! performers. Yet the show naturally fosters a supportive atmosphere, because everyone, performers and audience members alike, has some red-faced folly lurking in their past.

"It's the same reason that it's amusing to see childhood photos of someone or go through old yearbooks," says Lumpkin of Cringe!'s appeal. "These are universal experiences, and it's cathartic and entertaining to hear other people talk about them."

After more than a year of Cringe! shows, Russell admits that her diary is almost tapped out. But she's far from exhausting her cringiest material.

"There is no danger of me running out of things to share," she says. "I mean, my whole life is basically one long Cringe! performance."