The Ausable Club Is a High Peaks Haven

Just off a quiet stretch of Route 73 in the Adirondack High Peaks region, a carved wooden gate opens onto a majestic mountain road. Lined with lush forest, streams and beaver dams, the well-worn dirt track leads hikers to the heart of some of the tallest mountains in New York State.

At the head of the road sits a grand, 40,000-square-foot clubhouse, built in 1890 in the classic, rustic Adirondack camp style. The sprawling building — on the National Register of Historic Places and topped with dormer windows and a multi-tiered, domed porch — contains 30 guest rooms, a large dining and bar area, and an expansive sitting room with a fireplace for cool evenings. 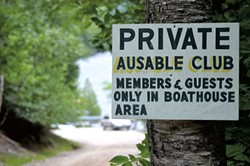 Welcome to the Ausable Club, where the front porch and several balconies look out on an incredible view: Giant Mountain, the 12th-tallest peak in the state, and its rockslide-scarred side. A challenging, hilly nine-hole golf course surrounds the grounds, which are also dotted with cottages — some of them passed down through generations of the same families.

The elite, old-school and notoriously private club may seem out of place in tiny Keene, a town of 1,100 working-class people whose average household income is about $64,000 per year. But these wealthy summer visitors provide jobs, shop at local businesses and pay taxes — a lot of taxes — as they have done for decades. The Ausable Club is woven into the history of the town and, rather than resent it, locals rely on it to keep the community afloat.

"All in all, it's sort of the lords and the peasants, but it's pretty harmonious," said Alex Shoumatoff, a writer who lived in Keene full time between 1988 and 1998 and still owns a house there. "They're seasonal people, so [residents] only have to put up with them from July 4 to September 4.

"The minute the season was over," Shoumatoff added, "we'd have huge parties, celebrations, because the summer season was over. It was a sort of an upstairs-downstairs thing."

At Ausable, players in tennis whites swat forehands on meticulously maintained clay courts. A lawn-bowling area abuts the clubhouse, where males age 6 and older must don a jacket and tie for Saturday dinner. That's just one of the rules a member handbook stipulates about dress, cellphone use, guests and children ("Shouting or loud voices are not acceptable. At no time is there to be running in the Clubhouse").

Some 450 people and their families are currently members of the Ausable Club, though only about a dozen live year-round in the immediate area. The rest mainly visit from tony zip codes around the country and are considered powerful people.

Bill Weld, the former two-term Massachusetts governor now running for vice president on the Libertarian ticket, has been a member since 1973. An heir to the Colgate-Palmolive fortune is in her sixth decade as a member. Author Russell Banks, whose book The Reserve is loosely based on the club, is a member. So is Mark Gallogly, a finance whiz who served on President Barack Obama's economic recovery advisory board. Gallogly's brother-in-law, a member named Tom Strickler, founded a Hollywood talent agency with Chicago Mayor Rahm Emanuel's brother, Ari, who in turn served as an inspiration for a character on the HBO show "Entourage."

New applicants, who must go through a rigorous vetting process, are placed on a wait list until a vacancy arises, according to club rules. Initiation fees today can cost more than $10,000 — plus an annual membership cost, depending on age, of some $4,000. And that's for a club season that lasts from Memorial Day to Labor Day.

"It has been said that, except for a motorbus replacing the horse-drawn carriage in the mid-1930s, there has been no basic change in the quality of [club] life and its environment since it began," reads a club-provided one-page history. None of the changes during the last 100-plus years, it continues, "seem to have altered the values for which this heartland of the Adirondacks was originally preserved."

The Ausable Club's history is rooted in environmental conservation that perseveres today. A group of moneyed men from Philadelphia formed the Adirondack Mountain Reserve corporation in 1887 and set their sights on protecting a pristine watershed, surrounded by forest, which was threatened by a burgeoning upstate New York timber industry.

"The attraction was Upper Ausable Lake, which, with its companion, Lower Ausable Lake, are the most hauntingly beautiful lakes in the Adirondacks, glacially deep with still, dark surfaces reflecting rock walls that rear out of the water and vanish into the mist on overcast days," writes Craig Gilborn in his book, Adirondack Camps: Homes Away from Home, 1850-1950.

The group bought the grand hotel on the property and christened it the Ausable Club in 1906. By 1910, the club held title to 45,000 acres, an area that included the peaks of the Great Range and the state's tallest mountain, the 5,344-foot Mount Marcy. The club instituted a no-hunting policy and banned dogs, which would spook wildlife, from its property.

In the early years, the club hosted distinguished members and guests such as Mark Twain, famed clergyman Henry Sloane Coffin, president Woodrow Wilson and Charles Lindbergh, according to Paul Schneider's book, The Adirondacks: A History of America's First Wilderness.

By the 1940s, then-secretary of war Henry L. Stimson and assistant secretary of war John McCloy were club members. "When the long war finally ended on V-J Day, he and McCloy returned to the club and Stimson was given a standing ovation when he entered the dining room," writes Schneider.

Rising taxes forced the club to allow some timber cutting and, eventually, piecemeal property sales to New York State that would keep the land in preservation — without the burden of stewardship and annual tax payments.

By the 1960s, the club was in sufficiently dire straits financially that it increased membership enrollment, according to Peter Reed, a local who worked for the club at the time. Eventually, the club's members decided their privacy exceeded their need for cash, Reed said, and they backed off on soliciting new enrollees.

The Ausable Club's most recent significant land deal with the state was in 1977: a sale of 9,300 acres that included the tops of 11 of New York's highest 46 peaks.

Today, the club's buildings and 7,000 acres of property are assessed at $44 million, making it one of the biggest taxpayers in Essex County. And more than 100 people, including a fair number of locals, work at the club in season, while about 20 are on year-round. It adds up to a lot in a town that depends on tourism.

"If it wasn't for them, our taxes would be much greater because they own so much land and they employ local people," said Reed, who has spent all of his 72 years in Keene. "If something happened and the club folded up, it would hurt here."

A 'Jewel' to Walk

On the weekend before the Fourth of July, I decided to join the 20,000 or so people that hike through club property every year. The 3.5-mile Lake Road behind the club extends to 27 miles of trails that wind off into the wilderness. Many of them lead to some of the state's 46 mountains more than 4,000 feet tall that hikers tackle to become so-called "46ers."

Best of all, the trails are open to the public: Under an easement agreement made with New York State, much of the club's acreage is accessible to everyone. The Lake Road ends at the fjord-like Ausable Lakes, which are private club property best viewed from the surrounding mountaintops.

I grew up visiting this section of the Adirondacks and have fond childhood memories of clambering down the Lake Road in search of adventure. And, full disclosure, family members past and present have belonged to the Ausable Club.

When I broached the topic of a story with the club's general manager, John R. Schuler, and, eventually, president Bill Paternotte, they politely declined. Club members are private types, they said. So I decided instead to meet nonmembers: hikers and others who use club property because, well, they can.

One couple I met, Steve and Tina Plugge, had not previously visited the Ausable Club or the trails behind it. The rustic setting reminded Tina of summer camp; Steve pictured scenes from Dirty Dancing.

"I kept thinking, Nobody puts Baby in a corner!" Steve said of the movie's iconic line. (The 1987 flick was filmed in Virginia, though it's ostensibly set in New York's Catskill Mountains.)

The Plugges told me they'd turned around after encountering a black bear and her two cubs. They weren't kidding: About a mile up the road, a mama bear snuffled in the grass as two tiny cubs played, running around and pawing at the air. The preserve, as envisioned by its founding members, was doing its job. 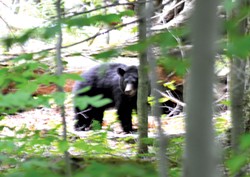 As a thunderstorm rumbled in, I decided to call it a day. I turned back toward the club and greeted a group of weary walkers finishing a hike on Sawteeth mountain, named for its distinctive profile.

I joined up with the group of siblings and one spouse. They all live in the Northeast, they told me, and try to meet up for occasional day hikes, frequently in the Adirondacks. A solo hiker fell in with us on the walk back from his climb up Indian Head, a well-traveled trail because of its short length and sweet views of the Ausable Lakes. The crew was happy to hike for free, especially compared to out west, where private land can cost an admission fee, said Sarah Downes, a hiker visiting from Enosburg.

"They don't have to allow public access," she said of the club. "They have a jewel that anybody can use."

The next day, I was back at the club for a different spectacle: fireworks. The club's busiest time of year is always the Fourth of July weekend, when hundreds of members arrive to golf, fish, play tennis, enjoy the weather and dine at the clubhouse. It climaxed on Saturday with an epic pyrotechnic display, rattling and booming across the mountain valley. It's also the one time of year that nonmembers can come to the club to a part of the property usually considered off limits.

Members, dressed to the nines for the evening, gazed out from the clubhouse porch after dinner while locals and other visitors on the golf course sat on camp chairs and huddled under blankets to ward off the cool mountain air.

"That they allow all these people on their golf course — it's very civic-minded of them," noted Gita Grady, a nonmember from Keene Valley who has visited each summer for decades. Children ran by giggling and playing as they waited for dusk to fall. "We made a big effort to get up from New Jersey tonight so we could get here for the fireworks," Grady added. "It's the icing on the cake."