The Audacity of Hoop Author Talks Basketball and Obama 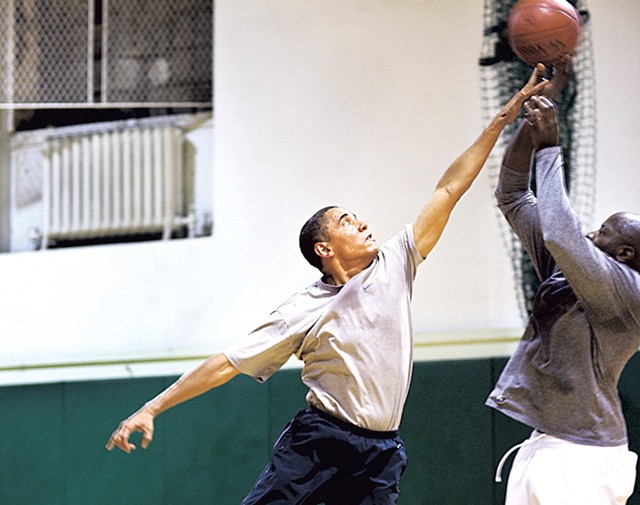 Let's imagine the opening shots of the inevitable future biopic on the life and times of President Barack Obama. It starts with a close-up of a basketball dribbled on a blacktop court. The camera pans slowly out to reveal the hustle and flow of a playground pickup game; a blur of whirling elbows and sneakers; a symphony of shouts, grunts and trash talk.

The players are middle-aged black men, except one. Also black, he moves with the gawky, fawn-like gait of a teenager who has yet to grow into his lanky frame. He stands at the top of the key, dribbling the ball and sharply eyeing a larger man crouched defensively in front of him.

The kid fakes to his right and then cuts left — always left — and drives by his man. He skips into the lane and, just as the defense collapses around him, launches toward the hoop. He floats the ball off his fingertips, just over the outstretched arm of a defender. We see the slow arc of the worn ball against a backdrop of swaying palm trees and a hazy, late-day Hawaiian sky. The ball kisses the backboard and drops neatly through the hoop.

One of the older players throws an arm around the boy and tousles his bushy shock of jet-black hair. "Nice shot, Barry," he says. The camera lingers on the kid's face, and we see a wide, toothy grin that will one day become the most famous smile in the world. Roll opening credits.

There's nothing unique about the young Barack Obama's avid basketball playing. From the playgrounds of Harlem's Rucker Park to the decaying gyms of rural Indiana, basketball has been a pastime and rite of passage for generations of Americans, most of whom don't grow up to become the leader of the free world.

But for Obama, basketball was not merely a passion play. A famous formative influence on young Barry, the game has remained a constant throughout his life.

According to longtime Sports Illustrated senior writer Alexander Wolff, the lessons Obama took from the hardwood and asphalt courts of his youth have likewise remained central to his being. They've informed him both personally and politically, whether he was a benchwarmer on a state champion high school team in Hawaii, a community organizer playing pickup games in Chicago or the POTUS playing on the full court he had built in his backyard at 1600 Pennsylvania Avenue.

That's the thesis of The Audacity of Hoop: Basketball and the Age of Obama, the seventh and latest book from New York Times best-selling author Wolff. The Vermont-based author uses a series of essays and photos to chronicle Obama's life and presidency through the lens of basketball, relying on anecdotes and interviews with the president's friends, coaches, family members and political advisers.

In his fluid, insightful prose, Wolff constructs Obama's personal history as it relates to the game. That history starts with the basketball he received as a Christmas gift from his absentee father when he was 10 and proceeds through milestones like Obama's use of basketball as a humanizing campaign strategy and his revelation of his March Madness bracket on ESPN.

Wolff also draws parallels between, as he puts it, Obama's "basketball jones" and the president's approach to decision and policy making as a politician and leader. If that approach sounds just slightly precious, it is.

Wolff agrees. "There are lots of pitfalls in extrapolating from basketball into politics or personality," he says in an interview at a bakery near his Addison County home, where he lives with his wife and two children. "And I probably stretch some analogies a little too far in the book, but it's a fun parlor game to play."

One of Wolff's key — and most successful — analogies begins with the idea of basketball as a game that relies on improvisation and creativity within a rigid framework. By challenging himself against superior players, Wolff writes, self-taught player Obama improved his game, much as the politician Obama surrounds himself with knowledgeable experts to help him govern.

Early in his presidency, Obama played frequent pickup games. And they were intense. Players who were perceived to take it easy on the commander in chief were rarely invited back. Among the regulars on the presidential court were Secretary of Education Arne Duncan, who'd played at Harvard; and personal aide Reggie Love, who was a member of the 2001 Duke NCAA championship team.

"Until he stopped playing, fairly early in his presidency, the games were very serious, and he was generally one of the least accomplished players on the court," Wolff relates. "That forced him to be even more accommodating, more of a blender. To know how to play with people who are better than you is, to me, somewhat analogous to what he's doing as an executive. He's collecting people who are experts, and then it's on him to sift through it and render some kind of decision."

Wolff makes myriad other cogent points throughout the book about the ways basketball has shaped Obama's life and presidency, and vice versa, including how he used the game to grapple with his own identity as a fatherless, mixed-race child. That, says Wolff, is something he'd like to ask the president about if he ever has a chance. The writer wasn't granted such an interview, but Wolff used Obama's own eloquent spoken and written statements on his relationship to basketball to piece together answers to his most pressing questions.

Even without presidential face time, Wolff paints a telling and evocative portrait of the baller in chief. And he deploys basketball metaphors with the artistry and vision of Los Angeles Clippers point guard Chris Paul — an occasional Obama court-mate — setting up a Blake Griffin-style dunk.

The essence of basketball is that it's a team game composed of individuals. Success requires a balance of selfishness and selflessness, and the power to improvise within the system to achieve a common goal. Michael Jordan wasn't great simply because he was the best player on the planet, but because he could raise the game of those around him.

"That sweet spot between freedom and responsibility is so much who he is," says Wolff of Obama. "In The Audacity of Hope[: Thoughts on Reclaiming the American Dream], when he writes about public life and how we need to tend to our responsibility as a society, and talks about that tension between the individual and the collective, you see that in any basketball game you go to. There is a moment when one player has to make an individual play," Wolff continues. "But in the end, the team that has five players who are all fighting alone is doomed to fail."

From The Audacity of Hoop:

In those pickup games, Obama has written, "a handful of black men, mostly gym rats and has-beens, would teach me an attitude that didn't just have to do with the sport. That respect came from what you did and not who your daddy was. That you could talk to rattle an opponent, but that you should shut the hell up if you couldn't back it up." An airy civility pervades in Hawaii, a corollary of the "aloha spirit" which lends the local pidgin idioms like "no talk stink" and "cool head, main thing." The playground served up attitude and argot with a harder edge, more mainland than island, and that suited Barry just fine.

To some extent, Obama admitted, he was "living out a caricature of black male adolescence" with his enthusiasm for the game. An African American senior at Punahou who hoped to become an attorney watched as Obama, then two years younger, inscribed a parting message in the graduate's yearbook: Get that law degree, and someday you can help me sue my NBA team for money. But even if Obama played "with a consuming passion that would always exceed my limited talent," as he would write, that consumption came with a perk: "At least on the basketball court I could find a community of sorts, with an inner life all its own. It was there that I would make my closest white friends, on turf where blackness couldn't be a disadvantage."

The Audacity of Hoop: Basketball and the Age of Obama by Alexander Wolff, Temple University Press, 224 pages. $40.