The Assassination of Jesse James By The Coward Robert Ford 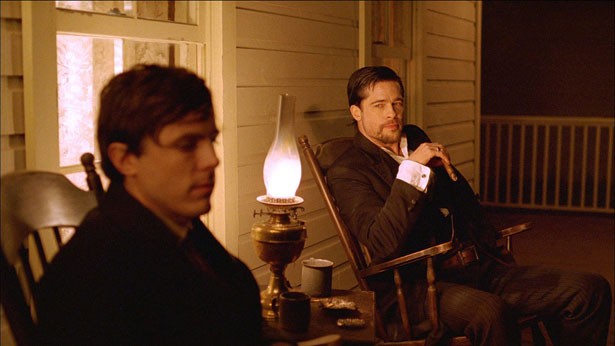 There's no shortage of movies out there about Jesse James - or the real and blood brothers who made up his infamous James Younger Gang. By the time this particular story begins, the group has become the most legendary outlaw band in the world and is on the verge of self-destruction. It's led by two strong but quite different personalities. Brother Frank is played by Sam Shepard. Following the train robbery that opens the film, he hangs up his guns and vanishes into the mists of time. This leaves us to follow the solo career of Jesse, brought intricately to life by Brad Pitt.

Based on the 1983 novel by Ron Hansen, Andrew (Chopper) Dominik's masterful and haunting new movie looks back on the final days of the famed gunslinger through the prism of modern celebrity obsession. So it is not surprising that one of its main characters brings to mind Mark David Chapman, who stalked and killed John Lennon. Casey Affleck gives a career-defining performance in the role of Robert Ford, a 19-year-old fan who talks his way into his idol's inner circle.

This is an epic Western with magnificent cinematography, unusually fine dialogue, a battalion of memorable minor characters and a hypnotic score by Nick Cave - who also did the music for The Proposition, and is fast becoming the Ennio Morricone of the postmodern oater. Principally, though, it's a story about the weird dance of death between two men.

In his thirtiess - his twilight years - the film's Jesse James is as troubled as he is well known. As ruthless and frequently cruel as ever, he is the indisputable leader of the scant remnants of his outfit. He is also increasingly insomniac, distracted and paranoid. The governor of Missouri (nicely played by politico James Carville) has announced a bounty for his capture or murder, equivalent to roughly a million dollars today. Rather than planning and pulling off new jobs, James gives himself over to imagining which of his cohorts might be in cahoots to collect the reward.

Ford is the sort of person who grows up believing himself destined for greatness, despite not being particularly good at anything. He's read and reread every dime novel published about his hero, and dreams of someday riding beside him. The opportunity presents itself when his older brother Charley (Sam Rockwell) is hired to help out on the gang's final job. The younger Ford approaches the younger James brother before the robbery and spills his guts. For reasons that will forever remain a mystery, the bandit takes him under his wing.

To read its title is to know what's coming, yet Dominik's picture is so thoroughly unlike any previous Western that its nearly three hours feel like half that, and its meticulously drawn characters leave one wishing for time to get to know them even better. There isn't a single shoot-out. There are no posses. Nobody in the gang has a problem with whiskey. In fact, we learn James could barely get a beer down, he found its effects so disagreeable. There isn't a cliché of the genre in sight.

Pitt has already taken top acting honors at the Venice Film Festival for his authoritative, understated portrait of the frontier superstar. This is without doubt some of the best work he's ever done. Affleck is every bit as transfixing as a first-generation stalker. You sense that he has the ratio of obsequiousness to creepiness exactly right, perfectly embodying this peculiarly American type.

The Assassination of Jesse James is a film propelled by quiet surprises, and the final act has a twist few will see coming. Fate brings Robert Ford fame after all. For a brief time, he was one of the most recognized men in the country. In the film, he comes to understand his notoriety is undeserved, but the realization arrives too late. A cycle has been set in motion. Somewhere, someone Ford has never met has his sights set on him.

TRAILER: The Assassination of Jesse James by the Coward Robert Ford