The Artist as Voyager 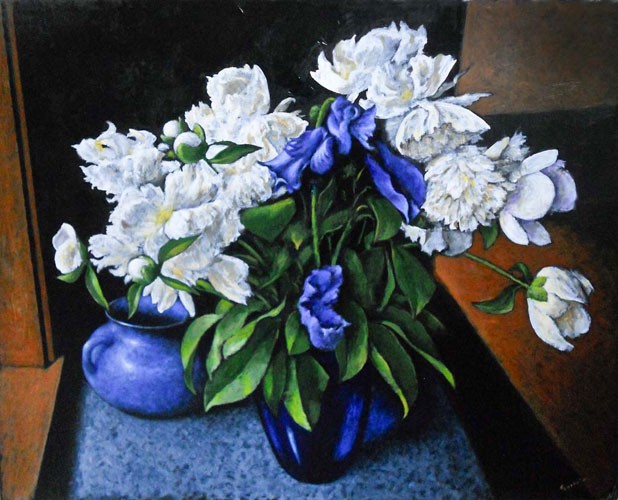 In his exhibit of paintings in the Vermont Supreme Court Lobby, Montpelier artist Ed Epstein includes two images of himself: one, from 1953, titled “Self-portrait, Route 40, Indiana,” in which the young lad stands strumming a banjo next to a 1930s-era, round-bumpered car at a roadside picnic area; and another of more contemporary vintage. In the latter, Epstein has painted his lined, bespectacled face partially in shadow, as if not quite wanting us to look him in the eye.

The presence of two self-portraits would not necessarily be significant in a show of works whose subject matter spans years and locales, even though this exhibit is called “Recent Paintings.” But these two works do bookend, at least conceptually, Epstein’s unusual life journey. This “New Yorker by birth, Vermonter by choice” artist has realized more callings than most of us dream of: musician, woodstove designer, boatbuilder, sailor — he spent eight years living aboard a 36-foot schooner he built himself, until a collision with an errant shipping container put an end to both the boat and his seafaring lifestyle.

For more than four decades, Epstein says, he stopped painting — though he never ceased drawing. While living in Trinidad, he writes on his website, he discovered the black sketchbook and learned to draw light.

When Epstein picked up the brush again two years ago, back home in Vermont, his sketchpad studies served him well; his paintings are studies in observant expression, and in varieties of light — the dusky skies of early evening, the fullness of sunlight on water, white window light falling on opulent blossoms, the lamp-lit face. Epstein does it with saturated color, and with strokes of acrylic so richly layered that the pigment resembles oil pastels.

Epstein’s exhibit includes no fewer than 45 portraits — friends all, many of them denizens of central Vermont. To recognize them is to realize the skill with which the artist navigates not only each subject’s appearance but the ineffable quality that makes him or her unique. Not that they are exactingly realistic; while some of Epstein’s subjects seem to bask in a revealing, clear light — eyes aglow, features burnished — others are murkier, grittier, with hard black outlines and unnaturally hued skin. Regardless of one’s tastes, every one of these paintings is captivating.

Epstein’s years at sea — and home base in Trinidad — are reflected in his paintings of an assortment of boats, from a fleet schooner cresting the waves to a long “derelict in the mangroves” that has passed its ocean-going prime. Boating aficionados can appreciate the spectrum of colors Epstein captures on water and sky, the relationship of craft to a fluid surface. He paints boats like a man approaching a lover, embracing both the new adventure and the responsibilities of a relationship. In “Schooner, Martha’s Vineyard,” a gouache with yellow sky and teal sea, the edges of the canvas are scumbled with red, a suggestion of bloodied passion.

In his landscapes — from Italy to the islands to Vermont — Epstein approaches his subjects with a darker but no less visceral perspective. His “Hillside, Italy” is almost menacing, devoid of context but for the dark bramble of vegetation against evening sky. Epstein’s “Castle Ruins, Tavira, Portugal” is beckoning even though empty.

And then there are his botanical beauties. On his website, Epstein acknowledges flower power with this warning to all who would duplicate them: “Good luck to the intrepid painter that dares to venture into this thorny thicket.” His still- life paintings of flowers are not mere re-creations of fact but gorgeous, lush, commemorative paeans to the evanescence of life. His cobalt-blue vase filled with luxuriant white peonies is a visual sonata.

And speaking of music, that passion comes through in Epstein’s exhibit, as well. But only on his website do we learn that, in the 1953 self- portrait, he was on a cross-country trip — hitchhiking, at age 17 — and met Woody Guthrie. Two years later, Epstein writes, he was in a chorus organized by Pete Seeger for a series of Folkways records. But at age 19, he continues, he set aside folk music and, “inspired by Pablo Casals recordings,” took up the cello — for 35 years. Then, Epstein moved on to the steel drum, an interest echoed in some of his portraits of Trinidad musicians. He returns to Vermont players in dynamic portraits of, for example, guitarists Doug Perkins and Jairo Sequeira.

It’s too bad Epstein did not include a selection of his scratchboard drawings in this exhibit; the lively, active surfaces reveal his most candid moments. But the Supreme Court showing is a thoroughly satisfying exhibit, regardless. It’s enough to take in Epstein’s prowess with a medium that results in such masterful statements.