The Art of... Teaching Improv

"Hair!" yelled an audience member, in response to 14-year-old River Mitchell's appeal for a one-syllable word. With that, two boys came to the front of the stage of Off Center for the Dramatic Arts in Burlington and began a "Rap Battle."

"I used to have really long hair," said 14-year-old Calvin Lord as a synthesizer beat pulsed in the background.

"Sometimes I like to ride on a bear," another improviser suggested in response.

The three were among a dozen kids, ages 9 to 15, who put on the hour-long performance that showcased the work of Tiger Monkey Dragon Performing Arts, a program that teaches kids the craft of improvisational comedy. Each scene required audience participation and quick-thinking from the kids on stage.

In "World's Worst," improvisers imagined what the world's worst mathematician would be like. "You add 5 plus 8, and it's pi," said one performer. "It should be coming out of the oven right now."

Audience members chuckled, and the performers had fun, but improv is about more than silly games, according to Mark Stein, the 49-year-old founder of Tiger Monkey. The art form teaches important life skills, such as collaboration, creative expression, trust and confidence.

"I feel like having a successful life is based on your ability to perceive your surroundings, perceive the needs, desires and limitations of other people, and be able to express those things about yourself," said Stein. "Improv is a highly collaborative endeavor ... It's about a group creating comedy together."

A former elementary school teacher, who works as a teaching artist for the Flynn Center for the Performing Arts and the Vermont Arts Council, Stein grew up in Milwaukee, performing magic as a child. He moved to New York City at 18 to attend Columbia University, where he first got into the improv and storytelling scene. He graduated with a degree in philosophy, then earned a master's degree in early childhood and elementary education from the Bank Street College of Education. He taught in New York City's public school system before moving to Vermont nine years ago, landing a job at the Schoolhouse Learning Center — an independent, nonprofit PreK-8th grade school in South Burlington — in 2010.

On the side, he has performed with Napoleon Improv, Vermont Comedy Club's professional improv troupe, and served as the master of ceremonies for various storytelling and nonprofit events. 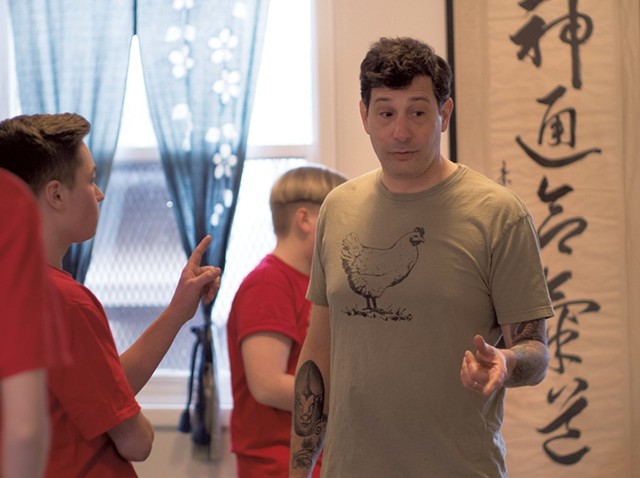 He combined his interests and began offering after-school improv classes at the Schoolhouse soon after he began teaching there.

While "it's impossible to directly teach anyone to be quick-witted, funny and spontaneously creative," Stein said, his students learn "a whole constellation of techniques, recommendations and general tendencies that lead to good comedy when we agree to them and apply them as a group." Those include principles like "Yes, and...," which is the idea that "improvisers take anything their partner offers, affirm its reality, then add detail." The complementary principle, explained Stein, is avoiding denial, which means improvisers try to avoid directly negating any detail a partner brings into any scene. During class, students learn and review these principles and others, then "do exercises to improve and perfect them, just like, in a tennis lesson, one might work through drills to improve a backhand swing," explained Stein.

The Schoolhouse after-school classes led to the creation of Tiger Monkey Dragon in 2015. The name is inspired by the Chinese zodiac, Stein said. "It just has a fanciful ring to it."

Last September, he left the Schoolhouse to devote his energy more fully to Tiger Monkey Dragon, which offers weekly improv classes for kids in third grade and up, as well as instruction in hip-hop dance, magic and filmmaking.

To keep classes accessible, kids can try one for free. There's no obligation to pay for missed sessions, and Stein provides healthy snacks, like veggies and hummus.

His improv students, whom he often playfully calls "knuckleheads," sing his praises. "He's one of the nicest people you'll ever meet," said River. "He's really not afraid to express himself."

That means resisting the urge to micromanage his students, said Stein. "My goal isn't to showcase kids in an improv show," he explained. "It's for kids to run an improv show."

Before their March performance, 10-year-old Luke Albers said that Stein's classes have helped him overcome his shyness. "That was a big thing for me before improv," he said. "Now I tell jokes to people I don't even know."

Was he feeling nervous for the upcoming show? Yes, he said, "I have butterflies." And then — sporting a half smile and without missing a beat — he added, "Probably from all those caterpillars I ate in the garden this morning."