The Art of Teaching Adolescents 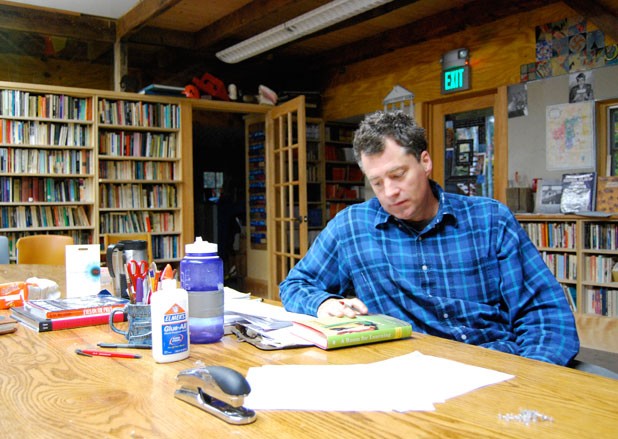 In some places, parents who don’t like the looks of the local public schools send their kids to established, private ones, or they homeschool. In Vermont, a third option is surprisingly popular: Starting your own.

That’s what Tal Birdsey did in 2001 when he opened the North Branch School in Ripton. It’s one of five small, independent schools in Addison County alone. Birdsey has chronicled that experience in a humorous and touching new memoir, A Room for Learning: The Making of a School in Vermont, which was published in September.

Vermont maintains a liberal, let-a-thousand-flowers-grow policy toward independent schools: In fact, it seems almost dangerously easy to start one. Three months before the beginning of the school year, prospective principals must file with the state an outline of their curricula, a description of how they’ll perform annual student evaluations and a statement that the school will be in session for about 175 days. They must swear to a list of “assurances,” but those are little more than a bunch of promises — to, say, take attendance, have teachers and materials to carry out the educational program, and provide a building that meets state and federal codes.

As Birdsey reveals, that paper pushing is a mere warm-up for the logistical challenges that follow. It’s easy to promise to have a suitable building, but much harder to find one, especially in a small town like Ripton.

It’s also easy to promise to have teachers and books, but much harder to get anything more than a box of donated “out-of-date encyclopedias, history textbooks, and tattered, marked-up copies of Crime and Punishment and Lord of the Flies,” Birdsey writes. And you can assume you’ll have an eager crop of students, but it takes something akin to a political campaign to persuade parents to entrust their kids to an institution with zero track record.

As his book attests, it all worked out for Birdsey, 44, and the North Branch School. Now a nonprofit, it has 27 students in seventh through ninth grades and three full-time teachers. They’re ensconced behind a grove of trees in a schoolhouse with shiny concrete floors and walls made of Homasote, where the students’ artwork and writing are tacked up for all to see. There are separate rooms for humanities (Birdsey’s area), math and science, and the basement holds the art department. Outside, a flagstone patio opens on a soccer field nestled against the forest. Tuition is $8000 per year, with a little financial aid available.

Of course, it didn’t start out like this. Birdsey’s memoir chronicles the school’s first few, sometimes-rocky years. North Branch began as an idea hatched in the Ripton Community House in November 2000. The parents and teachers who met there agreed that they were satisfied with Ripton Elementary School, which had about 60 students, but they weren’t crazy about sending their kids to the regional middle school in Middlebury. They thought a smaller community middle school — one that felt more like a family — would be a better transition to high school.

Birdsey was invited to the meeting because he had taught kids that age for 10 years at the independent Paideia School in Atlanta, which was established in the early 1970s by a group of parents who sought a more informal and individualized curriculum for their children. Birdsey also had two small boys. The stay-at-home dad believed that “a school, created from my hands and heart, was the greatest thing I could give my children — my gift to them and to the future,” he writes.

The ideas expressed at that first Ripton meeting reminded Birdsey of Paideia, he says, where parents were always hanging around the school, and students called the teachers by their first names. At the middle school, in particular, the classes met at circular tables so the students could face one another. They often expounded on their own experiences. The curriculum reflected a belief that adolescents are at the cusp of social and emotional independence from their parents, and that they can learn who they are by engaging openly with their peers. “That’s what I wanted to bring here,” Birdsey explains on a recent afternoon in his book-lined classroom, “a school where the kids were talking to each other and listening to each other all the time.”

But he didn’t come to Vermont with the plan to start a school. Birdsey was raised in Atlanta, where he attended Paideia himself, from third through 12th, and then went to Middlebury College. Later, while teaching back in Atlanta, he spent five summers earning a master’s degree from Middlebury’s Bread Loaf School of English.

Birdsey relocated to Vermont in 1998; his two sons are now ages 11 and 14. They’re both at the North Branch School this year.

By January 2001, he had become the headmaster of the yet-nonexistent school. Over the next eight months, he signed up 10 students. Among them were a boy who couldn’t read or write, a girl with extreme anxiety, and another girl who had been “homeschooled, half-schooled, or unschooled and had spent half a traumatic year in the local middle school,” he writes.

This group gathered in a rented farmhouse, transforming the living room into a classroom. With the addition of a wheelchair ramp, fire alarm and exit signs, the house met zoning regulations — and just in time, too: The town issued the certificate of occupancy on the first day of school. Still, “it was pitifully gloomy,” Birdsey writes, “dark, cramped, with only one window on the north side of the house … In the living room, our two plastic tables sat dangerously close to a cast-iron woodstove.”

Hoping to score some supplies on the cheap, Birdsey and the science teacher, Eric Warren, paid $500 to subscribe to a “seconds” supply and equipment club, which entered members into a lottery for tools and equipment. “When the first box came,” Birdsey writes, “Eric and I ripped into it like greedy children under a Christmas tree. Out came a box of 1000 extra-small latex gloves … seven spare bicycle tires … and a diverse collection of nuts, bolts and washers, none of which connected to any other.”

But the school was more than a ramshackle building near the North Branch River outfitted with makeshift equipment. What Birdsey recalls is the chemistry among the students and their ability to loosen up and start talking. Richly remembered scenes in the book describe those first days, and moments from the rest of the year. Birdsey often asked the students to talk about their experiences and the feelings they produced. He had them write about their parents and friends and siblings, read poetry by Langston Hughes and William Butler Yeats and books such as Night and One Flew Over the Cuckoo’s Nest, and listen to John Coltrane.

The common thread in these disparate materials was a strong connection to the students’ lives, which Birdsey would highlight at every possible opportunity. “It’s got to be related to them,” he says, “or they’re not going to relate to it. They’re self-centered and narcissistic. That’s just the way they are.”

Birdsey would compare the civil-rights movement and Martin Luther King Jr.’s philosophy to the challenges of adolescence. “The kids want to be recognized for the content of their character,” he asserts, “but they’re not even sure what that is yet.”

As the school year wore on, two more students joined the class, meeting Birdsey’s goal of 12 — Chairman Mao’s perfect number for learning, he notes. The new additions gave the school some momentum and helped convince the other 10 students it was a place with something to offer, Birdsey recalls.

In the fall of the second year, he was notified that the rented farmhouse’s septic system wasn’t big enough to accommodate a school. Luckily, a piece of land just down the road from the elementary school came up for sale. North Branch borrowed money to buy it and erect a new building, using beams salvaged from an old farmhouse. They moved in at the beginning of 2003.

During the school’s formative first year, Birdsey sent parents weekly emails explaining what their children were doing all day. “It suddenly occurred to me, as I was telling people about the school, that it was a pretty interesting story,” he says.

Those emails became the foundation of the book. Birdsey says the scenes and dialogue, imprinted in his memory, flowed out easily as he started to write. He got encouragement from local resident and author Bill McKibben, whose daughter attended the school, and who reviewed two drafts before Birdsey submitted his manuscript to publishers.

Birdsey cherishes that first year of discovery and experimentation, and believes that institutions tend to get ossified over time. “I once had a colleague who said, ‘Tal, we should be burning this school down every 12 years,’” he recalls.

But after creating a school from nothing, chances are Birdsey will find better ways to keep things fresh.