The Art Of... Poetry Recitation 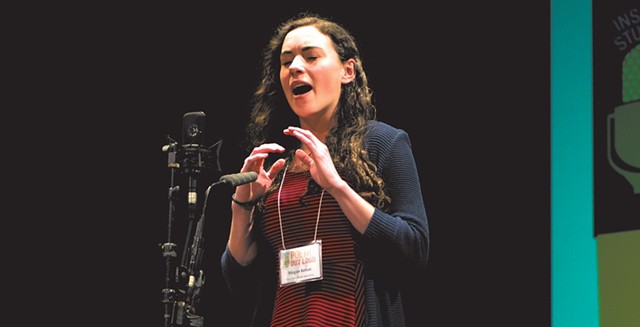 The ornate Barre Opera House typically hosts world-renowned actors and musicians. But at the Poetry Out Loud semifinals on March 9, Vermont high school students took center stage. In formal attire, they recited the words of Elizabeth Bishop, Edgar Allen Poe and a range of contemporary poets.

If the idea of a poetry-recitation contest sounds old-fashioned, these devoted participants are reviving the tradition. Many spent hours memorizing and practicing their poems, and the teens in the audience were rapt.

"Students are really taking to the idea of oral storytelling," says Erika Lowe, arts education program manager for the Vermont Arts Council. "And many of these poems are telling a story." She suggests the cultural resurgence is in part due to the rising popularity of podcasts and story slams, like the ones organized by the Moth, a nonprofit that hosts gatherings across the country.

The competition is a product of Poetry Out Loud, a program sponsored by the National Foundation for the Arts and the Poetry Endowment and administered by local arts councils. To start, hundreds of teachers in English classrooms throughout Vermont helped students chose from a bank of 800 provided poems. Then, with additional help from artists-in-residence, students worked to interpret line breaks and punctuation, research context, and learn performance techniques.

One winner from each of the 35 participating schools advances to the state semifinals, which produces 10 finalists. The last student standing in each state wins an all-expense-paid trip to the national competition, which takes place next month in Washington, D.C.

According to POL rules, each student must prepare three poems that together cover two criteria: pre-20th century and shorter than 25 lines. In the semifinals, participants chose two of the three to recite.

There was a teleprompter offstage, but no one seemed to need it. During breaks between performers, judges tallied scores evaluating physical presence, voice and articulation, dramatic appropriateness, evidence of understanding, and overall performance.

One might assume that kids with theater or poetry-slam backgrounds were shoo-ins. Not necessarily, says Lowe. Those students sometimes find it harder, because at POL, dramatic flourishes must be used judiciously. "Whatever emotions, physical gestures, a student uses should be in service of the poem, rather than overpowering the poem," Lowe explains.

Sharon Academy junior Taite Clark advanced to the state finals. Though he describes himself as "a quiet person — timid, shy, whatever," he projected confidence reciting Tony Hoagland's "Requests for Toy Piano" to a nearly full auditorium. Many students chose poems that tackled big issues like death, aging and violence, and Taite's was no exception.

Mt. Abraham High School senior Hannah Funk enjoyed accessing the universal emotions in poems by writers very different from her. She performed works by Native American Louise Erdrich and Chicana Pat Mora at the semifinals, and says POL taught her how to find "that one nugget in your poem that connects to you."

Funk, who made it to the finals, also appreciated the level of concentration required to memorize a poem. "I love that POL forces me to slow down," Funk says. "You spend weeks, months, memorizing it and interpreting it in such depth ... it's something we rarely do anymore."

The Poetry Out Loud state finals took place at Vermont PBS in Colchester on March 17. The winner, Rice Memorial High School's Maggie Fitzgerald, will represent Vermont at the national competition in May.