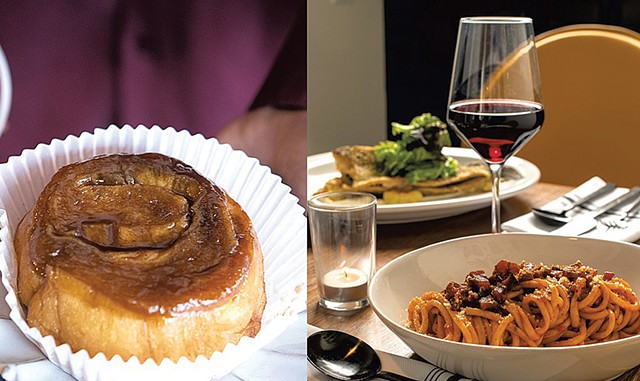 Matt and Caroline Corrente have put the Arcadian, one of their two Middlebury businesses at 7 Bakery Lane, on pause due to lack of staff. The Italian restaurant served its final (for now) dinners of housemade pastas and seafood on September 18 and entered what Caroline described as "indefinite dormancy."

The Haymaker Bun café and bakery, the Arcadian's daytime alter ego, will continue to offer breakfast and lunch with additional hours. Currently open Tuesday through Saturday, it will add Monday breakfast, Tuesday lunch and more afternoon hours as staffing allows. It's been easier to staff shifts in the daytime than in the evening, said Caroline, who is also working on expanded wholesale distribution of her signature sweet and savory buns.

The couple opened their pair of restaurants in November 2018. In March 2020, they quickly adapted the Arcadian to serve takeout Italian American comfort food with a skeleton staff of four. They reopened for seated dining on March 25, 2021.

Customer demand was high. "We naïvely thought the first year of COVID would be the hardest part," Caroline said. "Actually, restaffing our restaurant has been the hardest part."

Even with a $15 starting hourly rate, Caroline said, "by the end of the summer, it was just Matt left in the kitchen and no applications [for empty positions]. We have a 4-year-old son. It just became unsustainable. This is not a life we want."

Caroline said the Correntes understand the reluctance to return to jobs in which pay is notoriously low, shifts long and late, and stress high. During the early months of the pandemic, she said, "Matt was home by 6:30, and we thought, Oh, life could be normal."

While the Arcadian's future is uncertain, the couple isn't ready to call it quits.

Matt is still doing some catering, and "we've tossed around the idea of a wine bar," Caroline said. "Knowing my husband, he wouldn't last too long sitting at a desk. Chefs are a particular and crazy breed of humans."

The original print version of this article was headlined "Duo Diverges"