The APX Talk Fashion, Aaliyah and Working as a Married Couple 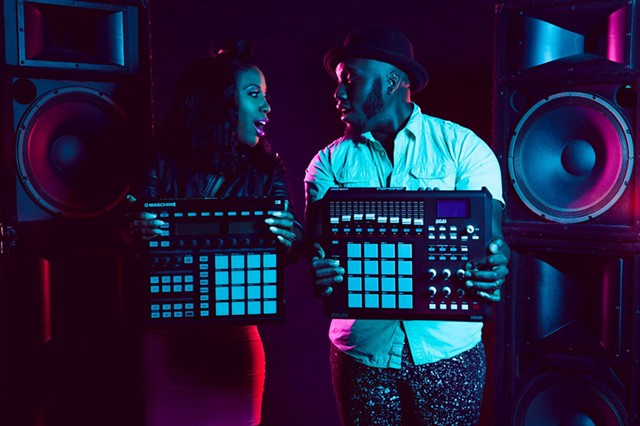 Atlanta-based duo the APX were born out of a mutual admiration society. Before becoming partners on- and offstage in the early-to-mid 2010s, Daniel "Dee" Rhodes, 28, and Erika Dawn Rhodes, 45, became fans of each other's solo careers — though neither was playing the kind of authentic, hard electro-funk for which their band is known now. Erika worked the rock scene in an Afro-punk project called Not From Here, while Daniel was a jazz cat.

After they started dating, the two founded a wedding-and-events ensemble called the After Party Experience. But a burning desire to pursue original music in the style of their favorite bands — Five Star, Rick James and Evelyn "Champagne" King, to name a few — eventually led them to the creation of the APX. Built on an arsenal of keyboards, synthesizers, drum machines, saxophone and keytars, the pair presents an uncannily authentic body of tunes on its full-length debut, Elektrik Funk.

The APX close out the Waking Windows music festival on Sunday, May 6, at the Monkey House in Winooski.

Seven Days caught up with the Rhodeses by phone.

SEVEN DAYS: I imagine working with your spouse can be pretty intense. What's something that would surprise people about your working relationship?

ERIKA DAWN RHODES: Daniel's an undercover, nonviolent Ike Turner. He's a perfectionist. He's really OCD about certain things in a performance that sometimes will drive me crazy. He's been playing instruments since he was 12, whereas I'm newer to it. He's been teaching me since we got together.

DANIEL "DEE" RHODES: I am a perfectionist. I started out as a jazz musician, so a lot of things come really easy to me because I learned one of the hardest forms of music before I learned anything else. [So] everything that she said is pretty much true.

She's been singing forever, but when it comes to playing instruments, she didn't want to just be the front girl who sings. [That's] something that she really wanted to do, and I admire her [for that].

Working together has its ups and downs, but what keeps us going is having a strong line of communication. We're keeping our marriage first.

EDR: A lot of times we say it's not fair how much fun we have.

SD: Other than Boulevards, I can't really think of many current, high-profile acts making really authentic-sounding '80s electro-funk like you are.

EDR: We toured on the West Coast, and the love was overwhelming. It's an underground funk scene, though.

DR: As far as the mainstream goes, no one's really touching it. Chromeo kind of touches it.

EDR: We were just watching that!

SD: Oh, funny! How do you feel about the show's representation of your city and its music biz?

As far as the funk scene is concerned, we're kind of trailblazing that one here in Atlanta.

EDR: A quick, funny story that's similar to [an episode] of "Atlanta": When me and Daniel were dating — he was getting ready to do a live performance at a taping of "Love & Hip Hop," and I wanted to be nosy and go there and check it out. He really didn't feel comfortable with me going. I said, "You've probably got your groupies down there or whatever." He said, "All right, babe. You wanna come? Put on the best dress you got. Let's go."

So, we get there and, sure enough, a few minutes after getting there, a big fight breaks out. Somebody has a gun, and I almost get trampled. [Dee] comes running through the crowd and gets me out of there.

SD: You both look intimidatingly cool in your promo pics. Tell me about your stylistic choices.

DR: We're kind of different in that way. With me, I always wear [porkpie] hats. That's something I've done since I was a jazz artist. It just became a part of me. As far as my shirts are concerned, I like to wear African shirts because I'm Liberian. My parents are first generation.

I like to represent African funk. I get a lot of my shirts imported from a good friend based in Nigeria: Shirts by Ocee. He sponsors a lot of my clothing and was one of our earliest believers. That's pretty much my thing: African funk T'Challa. If T'Challa was a funkster...

EDR: I have a love for kind of high-/low-end fashion. I'm a tomboy. I kind of like to incorporate a combination. I hate looking like everybody else. I'm just one of those people that, whatever people are doing, I'm gonna try my damnedest to do the opposite. I have a sponsor, as well. Her name is Gizzelle James. She's responsible for styling our videos, shows, stuff like that.

SD: Tell me a little about making the "Right on Time" video.

DR: A lot of our inspiration came from one of Erika's biggest inspirations, Jody Watley. We wanted to create that nostalgic, '80s music video feel. I wouldn't call myself a professional graphic designer, but doing the APX has brought out a lot of my skills. I designed a lot of the graphic, visual elements that are projected in the video.

SD: I love your new remix of Aaliyah's "Rock the Boat." I assume that means you're big fans.

EDR: Of course. She went to my hairdresser, so I got to see her a lot. John Gooden in Detroit was secret weapon to a lot of celebrities. Aaliyah was [based] in Detroit, and she was just, like, a normal person. She made sure she spoke to you. She was just a very sweet girl.

I was seeing her around the time all that stuff was coming out about R. Kelly. It was so weird. Seeing her in person, she was very teeny. She didn't look like she knew anything about dating a grown man. She was the sweetest [and] very in tune with her surroundings.

The original print version of this article was headlined "Super Freaks"