The Animal Issue Is a Gaggle of Goodness 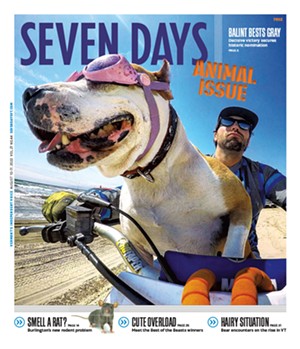 Pop quiz: What do you call a group of stingrays? Answer: a fever. How about a pack of zebras? That'd be a zeal of zebras. A herd of rhinoceroses? That's a crash of rhinos. We're not sure who made up all of the collective nouns for animals, but they sure are fun. Besides being descriptive, they're often alliterative: a prickle of porcupines, a stench of skunks, a pandemonium of parrots.

What to call a collection of stories about animals? Though it may not be as creative or elegant as the traditional terms of venery, the Animal Issue is Seven Days' moniker of choice for its menagerie of tales. And this year's edition is as crowded as a parade of elephants.

The pick of the litter may be the Best of the Beasts pet photo contest, which received more than 1,000 reader submissions. People love pics of their pets, so it's no wonder they also enjoy paintings by pet portrait artist Kenny Dale. If Hercules is a goo'boy and poses well, be sure to treat him to some locally made dog ice cream. And if he gets a tummy ache, give mobile vet clinic the Mitzvah Fund a call.

Of course, the Animal Issue is about more than pets. Vermont's Fish & Wildlife Department is stocking local lakes with a hardier species of trout. The department is also concerned about a statewide rise in high-risk black bear encounters. Be careful out there, folks, and take down those bird feeders until winter.

The research of a Middlebury College biologist is shedding new light on how fireflies and ants communicate with other members of their own species through pheromones. Meanwhile, in Montpelier, a journalist and field biologist finds himself drawn to moths like a ... well, you know.

Of course, it's not all good news in Vermont's animal kingdom. As if Burlington didn't have enough problems, residents are riled up about colonies of rats in the city. And in Monkton, officials are exploring humane ways to manage the town's beaver problems. Well, dam.

The original print version of this article was headlined "Pack Mentality"