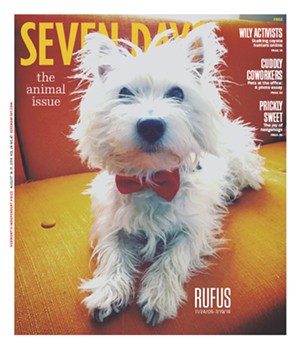 Well, arguably our end-of-year edition, 'cause we get a lengthy holiday break right afterward. But a very close second is our annual Animal Issue, which you currently hold in your hot little paws.

Like many of our readers, we love animals of all shapes and sizes: big, little, cute, ugly, fuzzy and ... pointy? Yup, after learning more about hedgehogs from local breeders, we're rather smitten with the so-called "prickly potatoes."

But Vermonters' connection to animals goes well beyond pets. In a largely rural state, it's critical for humans and wildlife to coexist. That's one reason the state has built wildlife crossings under local roadways, where the question is not why the chicken (or raccoon or porcupine or wild turkey) crossed the road but how. (And, did they make it safely?)

Of course, as much as we'd like to live in harmony with nature, sometimes we humans need our space. So we asked JoAnn Nichols of HEART Wildlife Removal for some tips on critter-proofing our homes; we found out how she humanely evicts nuisance animals such as mice, skunks and squirrels — and ensures that they don't come back. Perhaps the folks at Lowe's or Home Depot should give her a call about all those birds nesting in big-box stores?

We imagine Nichols might appreciate the veganic farming practices at Arbor Farmstead in Grand Isle, which has a live-and-let-live philosophy about what many people consider invasive pests. And it's a safe bet that she, like two local animal-rights groups, opposes the current open season on Vermont's coyote population, which allows hunters to kill the animals in unlimited numbers.

In happier news, one of Vermont's nine bat species might be more resistant to white-nose syndrome than previously thought. And a lab at the University of Vermont is using video games to combat the epidemic spread of diseases in pigs. Speaking of diseases, Sarah Hoy runs Vermont's only veterinary ophthalmology practice, Vermont Veterinary Eye Care. She can diagnose any number of ailments by examining your pet's eyes.

In Newport, K-9 Ozzy has become a celebrity police dog, thanks to dramatic exploits both real and fictional. The Belgian Malinois loves to work. So he might get along well with the dogs and cats we found at offices and stores all over the state. The latter don't actually do much work, but they sure make the day a little more chill for their humans.

Finally, we recently said goodbye to our beloved mascot, Rufus, who was Seven Days' original office dog. You might have noticed him listed on our masthead every week (with a variety of dubious job titles). That's Rufus, looking dapper, on the cover this week. RIP, little buddy.