Water is the basis of beer. At about 90 percent of every lager, stout or IPA, it's the canvas for flavor and the medium that binds together grain and hops into something drinkable. On the other end of the brewing process, it's also what keeps things clean — and it's the bulk of the waste.

At the Alchemist, people are more likely to line up for Heady Topper than to get a glimpse of the brewery's moving-bed biofilm reactor. But eco-minded fans might like to know that the company's approach to wastewater treatment is as good as its beer.

Owners Jen and John Kimmich have made significant investments in processes and systems to reduce the environmental impact of the waste from both the Alchemist Cannery in Waterbury and the Alchemist Brewery and Visitors' Center in Stowe. That waste reduction combines sidestream waste processing with the Stowe facility's in-house high-tech water-treatment system. The million-dollar investment reduces the amount of high-strength effluent — wastewater containing organic material left over from the brewing process — that flows into the towns' waste-treatment facilities.

Both Alchemist locations rely on municipal water for brewing. That might give pause to some beer drinkers. But, John insisted, "Vermont's water is outstanding." The Alchemist's brewery in Stowe is built over the town aquifer and, rather than digging their own well down into it, the Kimmiches made a conscious decision to take their water from the town.

"The municipality spent a lot of time and money making sure everyone has access to clean water that's safe," Jen said. "So if you're buying it from the municipality, that's good for the town."

The municipal water is treated, but only minimally, giving the brewery "a great head start," John said. "We have great water, and it's a nice benefit, because we've lived in parts of the country where water is not so great, and that would make it much more difficult to create the flavors we want in the brewhouse."

Using municipal water is one way the Alchemist is investing in the infrastructure of its communities in Waterbury and Stowe. The focus on minimizing the impact of its wastewater is a more indirect investment, but it has a huge impact on the capacity and function of the towns' waste systems.

Back in its humble brewpub days, the Alchemist had no state discharge permits. "Everything I brewed, any waste I had — all the yeast, all the spent hops — everything went down the drain and into the town of Waterbury's waste treatment facility," John said.

After Tropical Storm Irene hit the town in August 2011, Waterbury's town offices were forced to close. When the waste flow from those offices went down, the high-strength brewing waste at the Cannery became a problem. The brewery had started producing and canning Heady Topper that year; as production grew, the Kimmiches got a crash course in state wastewater permitting.

"We were really caught unaware," John said. "There was a guy from the state standing in the brewery telling us, 'You just can't put everything down the drain anymore,' and we didn't know what to do, because it's how we'd always done things."

Figuring out how to navigate the opaque permitting process — which included a well-timed conversation with James Ehlers, executive director of Lake Champlain International — set the Kimmiches on a path toward meeting state regulations.

The couple turned to their relationship with Grow Compost of Vermont, a company run by farmers Lisa Ransom and Scott Baughman. Launched in neighboring Moretown, the company's mission is to prevent organic material from going to the landfill and to put those resources back into the state's soil.

"The Alchemist has been one of our most important generators of organic material since they were just the pub," Grow Compost cofounder Lisa Ransom said.

Grow Compost had been taking food waste from the Alchemist's pub. When the liquid brewing waste became a problem, they began taking it — daily, in 55-gallon drums — as well. This process, known as sidestreaming, keeps high-strength organic matter from going down the drain. In this case, it means spent yeast from brewing tanks, spent hops from dry hopping, unfermented wort and lots of sugar.

"They were dumping the drums on their windrows, which we quickly realized was ridiculous," John said of where the farmers were putting the waste. The liquid was overwhelming the windrows, which aren't designed to handle liquid waste. The two businesses worked together to find a solution for the troublesome substance, and they chose the anaerobic digester at Vermont Technical College. 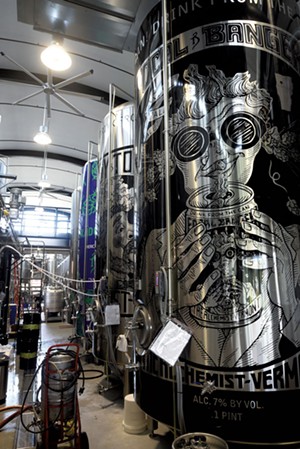 Anaerobic digesters produce renewable electricity from waste such as farm manure, food scraps and brewing by-products. It's a biological process that mimics how ruminants (including cows, sheep and goats) extract energy from food. The process releases clean energy and recycles the nutrients in the waste into fertilizer that can be used on local farms.

"The brewing waste is high-energy material, and it's excellent for compost and making energy," Ransom said.

Grow Compost now collects the liquid slurry of brewing residuals from both Alchemist facilities and brings it to VTC in a specialized truck that keeps it from getting contaminated while in transport. That daily collection is an important part of the mutually beneficial relationship between the Alchemist and Grow Compost. Ransom considers the Alchemist the compost company's highest priority, saying, "If we can't be there, they can't make beer."

"Grow Compost has been a great partner because they understand the value in this," John said. "They can make money off of it, and we have somebody that will take our money and do the right thing with the waste."

The companies have grown together, consistently achieving results well below the limits set by their direct-discharge permits from the state. Those permits allow for a specific level of biochemical oxygen demand (BOD), a common measure of the strength of wastewater. BOD quantifies the amount of dissolved oxygen needed by aerobic microorganisms to break down organic material (i.e., waste) in the water. The Alchemist's permit in Waterbury allows 65 pounds of BOD per day; thanks to this sidestreaming relationship with Grow Compost, the cannery only produces 20 to 30 pounds per day.

When it came time to plan the brewery's Stowe facility, which opened in July 2016, the Kimmiches wanted to take their wastewater management a step further.

"We saw what was at stake, and we love the water and we love Vermont, so we really put all of our efforts forward to go beyond just meeting the regulations," Jen said.

The Stowe facility does the same sidestreaming as the Waterbury cannery, but the additional system reduces the BOD output to less than one half of one pound per day. That's less solid organic waste per day than is produced by a three-bedroom household.

The system, which is essentially an aerobic digester, was seeded with a lab-sourced bacterial culture. Brewing waste enters the system through a massive settling tank, then it moves into a pumping tank, and from there it flows into the digester at a constant rate of five gallons per minute, or about 6,500 gallons per week.

The bacterial culture is a living organism and must be fed constantly to stay alive. The culture breaks down the waste, which is then coagulated and skimmed off. That waste is taken to the anaerobic digester at VTC, and the water that goes down the drain is cleaner than the wastewater created by a small family.

The room housing the wastewater system smells like a dirty fish tank. "That's the smell of environmental responsibility," John said. That smell will be reduced when the brewery adds bulk waste tanks this winter, streamlining the process and eliminating the more permeable 275-gallon containers that currently hold waste waiting to enter the system.

"The air quality in Steve's room will vastly improve," John explained, referencing where Steve Miller, the Alchemist's wastewater manager, works. "And it's going to make it easier for Grow [Compost] to do their job."

Miller, who as a former brewer has been on both ends of the brewing cycle, sees similarities between caring for the system's bacterial culture and managing a ferment during the brewing process.

"The bacteria aren't nearly as sensitive as yeast are during fermentation," he said. "But it's the same idea. We're constantly trying to keep these bacteria as healthy as can be, and then they'll keep doing the bulk of the work for us."

The culture is on a strict feeding schedule, and Miller ensures that they always have air to keep the system from collapsing. "It's a balance. If they get too many nutrients at once, [the bacteria] will overpopulate the reactor, and, instead of having the thinner, cleaner water coming through, it would be more like a gravy," Miller said.

The systems in place in both of the Alchemist's production facilities go beyond the current regulations for brewery wastewater in Vermont. The Kimmiches are still working to improve them, despite what they consider inconsistent regulation and murky information from the state.

"Every brewery puts out different amounts [of BOD]," Jen said. "There are a lot of breweries that don't know what they're putting down the drain, because some breweries are regulated and some aren't."

The couple hopes that leading by example — developing sidestream processes, testing their water and investing in more sophisticated wastewater treatment technology when they can afford to — will encourage other producers to consider their environmental impacts.

"It's an education thing, because everything has this daisy-chain effect," John said. "It doesn't just end when you dump it down the drain. Shit flows downstream."

The original print version of this article was headlined "Waste Not, Want Not | The Alchemist goes high-tech to keep its water clean"