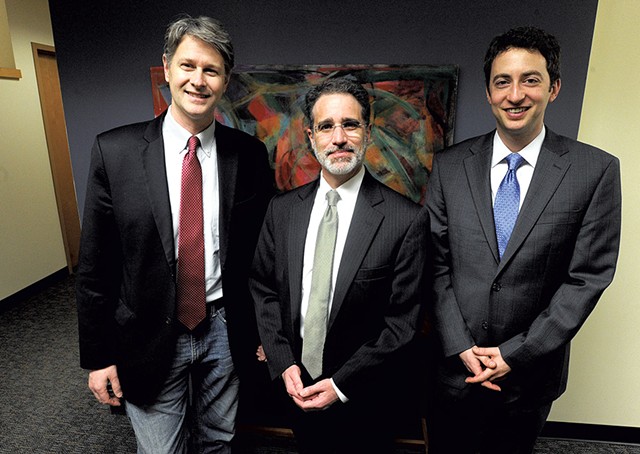 Less obvious, but equally striking, was the band of attorneys the new AG brought with him that day. Though none of them gave speeches, at least four of his senior staff members stood in the audience — and they'd all been involved in drafting the new law.

Legal observers say Donovan is turning out to be an activist attorney general — one who shapes the law in addition to practicing it. He says as much himself, noting that he wants his office to play "a much bigger role in the community."

To carry out that objective, Donovan has assembled a team of young and ambitious senior staffers — much like the 43-year-old AG himself — who have established reputations in the areas of civil liberties and low-income advocacy.

It won't be easy to revamp an office of 90 lawyers and 40 others who spent the previous two decades under the leadership of Donovan's more laissez-fair predecessor, Bill Sorrell. "It's like turning a battleship," said civil rights lawyer and former assistant attorney general Robert Appel.

To change course, Donovan will need to rely on his senior attorneys. "They're critical in the reorganization of the office," said Jerry Diamond, who served as AG from 1975 to 1981. And, he noted, "Your initial hires say something about your judgment."

Donovan has hired Christopher Curtis, a dogged advocate for low-income Vermonters, to lead his public protection division. And he brought on a defense attorney and Democratic operative, David Scherr, to oversee the newly created community justice division.

"What I see is a sort of progressive entourage that has been brought in — clearly different than what attorney general Sorrell had," said Defender General Matt Valerio.

"Sorrell would kind of come in the side doors, say whatever he had to say very briefly and leave," Valerio said in a Statehouse interview. "I've seen T.J. over here multiple times a week, and he always comes with an entourage."

Donovan has also hired Keith Flynn, public safety commissioner under former governor Peter Shumlin; Sarah London, who was Shumlin's general counsel and worked for Sorrell before that; and Ted Hobson, an attorney with expertise on employment disputes who worked in the AG's office under Jerry Diamond. Donovan is often accompanied these days by his new executive assistant, Natalie Silver, a former Vermont Democratic Party regional field director who worked on his unsuccessful 2012 campaign against Sorrell.

"He does have some really experienced and talented people working for him," observed Vince Illuzzi, a lobbyist, former lawmaker and Essex County's state's attorney. "It's somewhat unusual for an AG to be able to attract that kind of talent."

Josh Diamond has spent 22 years working at Diamond & Robinson, a Montpelier law firm cofounded by his father. In 1997, he partnered with the American Civil Liberties Union of Vermont to represent a group of fifth graders in Brigham, one of the most significant cases in recent state history. The younger Diamond and six other attorneys successfully argued that it was unconstitutional for towns to pay for schools with local property taxes alone because it led to disparities in students' education.

Diamond, who said he's drawn to constitutional issues, worked pro bono as both a trial and appellate attorney on the case. "There was really a gross inequity that the mere happenstance of where you might live could dictate such broad differences in educational opportunities," he said.

In 2006, he again partnered with the ACLU — this time to sue the state over stringent campaign contribution limits, which the group argued violated the First Amendment. Randall v. Sorrell went all the way to the U.S. Supreme Court, which struck down the limits in a high-profile defeat for the former AG.

Now, as deputy attorney general, Diamond is the chief operating officer of the office he once took to court. The 48-year-old has known Donovan for years and said he believes in the new AG's "progressive vision."

He doesn't, however, share Donovan's predilection for political maneuvering.

The AG "has a sense of politics that, quite frankly, is one of the best in the state," said Jerry Diamond. "Josh, on the other hand, I think, is more solidly based in the law." He described his son as a "lawyer's lawyer" who will "never shoot from the hip."

When a reporter tried to snap a candid shot of Donovan's deputy at a press conference earlier this month, Josh Diamond endured it with a grimace. Noticing what was happening, Donovan stepped into the frame, put his arm around Diamond and grinned for the camera.

Like Diamond, Curtis is the son of a prominent Vermont Democrat. In fact, his father, David, lost to Jerry Diamond in the 1976 race for attorney general. The political opponents became friends after the election, and David, who later served as governor Madeleine Kunin's defender general, became a mentor to Josh.

The younger Curtis met Donovan through another parental political race: In 1996, David Curtis and Donovan's mother, Rep. Johannah "Joey" Donovan (D-Burlington), both ran for a Chittenden County state Senate seat, and both enlisted their kids to campaign for them. (Neither candidate won.)

Twenty years later, Attorney General Donovan said he hired Christopher Curtis to lead his public consumer division because "I want someone who understands not only the legal system but also regular folks."

Curtis spent the last decade as a staff attorney at Vermont Legal Aid, representing clients who faced eviction, were denied public benefits or had suffered abuse. In his spare time, he advocated assiduously on behalf of low-income Vermonters during policy debates in the Statehouse.

In January 2015, he and Donovan met for coffee at Burlington's New Moon Café and hatched a plan to hold a "driver restoration day" for Chittenden County residents. The idea was to help those whose licenses had been seized due to unpaid fines — thereby limiting their mobility in rural Vermont — to reclaim them by paying a nominal fee. Two months later, hundreds of people lined up at the Cherry Street courthouse to take advantage of the offer, and the following year, the legislature created a statewide program modeled on it.

Curtis has never held public office, but he works the Statehouse with the deft touch of a politician. After attending the March bill signing with Scott and Donovan, Curtis walked over to the cafeteria, where he spent half an hour drifting from table to table, chatting with advocates and lobbyists.

Back in his office, where piles of paper encroached on dwindling open desk space, Curtis explained why he took the job: "What I hope to bring to this position is an understanding that economic justice really is the heart and soul of consumer protection and civil rights." Right now his division, which includes the civil rights unit, is on the defensive. Curtis said that staff are focused on monitoring federal activity: In addition to Trump's immigration orders, Curtis is concerned about the potential rollback of financial regulations that apply to prepaid credit cards and debt collection.

Down the hall from Curtis, Scherr occupies a windowless office with still-barren walls and a boxed-up set of Vermont law books. The 34-year-old defense attorney met Donovan through Democratic politics. He previously chaired the Chittenden County Democratic Party and ran for the state Senate last year.

After Scherr lost that race, Donovan approached him about working in the AG's office.

Noting that he previously worked with low-income clients through a contract with the defender general, Scherr said his views on criminal justice are in sync with those of his boss. The best way to protect public safety, Scherr contends, is to "minimize the extent to which we criminalize poverty and mental health and addiction issues."

He is spending much of his time in the Statehouse, pushing for criminal justice reform on behalf of the AG.

Other advocates welcome Scherr's presence. "He understands the needs of people who are struggling," said Jay Diaz, an attorney with the ACLU of Vermont.

Scherr's first priority this session is passing a bill to expand diversion — an alternative to court that allows participants to avoid a criminal record — and improve pretrial services, a program Donovan pioneered as Chittenden County state's attorney. The bill has passed the Senate and is under review in the House.

Donovan and Scherr's endgame is more ambitious: They want to further embed social services in the judicial system by bringing housing, treatment and other providers to the courthouse. The advantage: People could connect with services right away, rather than seek out assistance from multiple agencies on their own.

It's too early to tell whether the team Donovan has assembled will be able to deliver on his agenda. He hasn't made much progress on one notable pledge: to end Vermont's reliance on private prisons within 100 days.

But Curtis argues that the office's response to Trump's immigration ban was particularly significant.

"We've essentially created an immigration practice almost overnight that involves a litigation strategy, partnering with other states, challenging the executive orders ... a legislative strategy, working in partnership with the governor and leaders of the House and Senate on passing S.79, and a community-based outreach strategy to reassure communities and provide guidance to them about what's permissible."

For Donovan, Trump's singular presidency means more work — and an even higher profile for a man widely assumed to have greater political ambition.

"Most days since January 20, we're responding or we're strategizing on how to respond to the federal government, and that's really been the top priority," Donovan said. "The pace of change at the federal level is challenging, so there's been a change in priorities."

Josh Diamond, however, is quick to point out some of the attorney general's lower-profile initiatives. In partnership with the secretary of state, the office is holding a series of hearings to explore improvements to campaign finance law. The attorney general is also hosting information sessions at senior centers to educate people about elder abuse.

On March 13, Donovan announced an initiative to assist businesses trying to comply with consumer protection laws — another campaign promise. Diamond noted that the attorney general is asking the legislature for $180,000 to fund a business outreach position for this program, as well as a new attorney in the civil rights unit.

"We've got a lot of balls in the air, but I wouldn't have it any other way," Donovan said.

Activists are watching Donovan and his deputies closely. James Haslam, executive director of the nonprofit Rights & Democracy, which endorsed Donovan, said, "We have high expectations about what the Vermont Attorney General's Office can do to promote justice. It's great to see he's building a really strong team to do that."