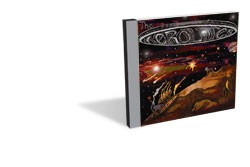 The Aerolites’ self-titled debut album doesn’t adhere to the confines of any one genre. Instead, it exists somewhere in the familiar grounds between jam, Americana and blues. In the first track, “Deception,” one can detect a healthy dose of the Grateful Dead, a hint of Tom Petty and a pinch of B.B. King — hardly a unique amalgamation in the Burlington music scene. In fact, it feels like we’ve heard this band and these songs a million times before, pouring from open windows up and down Buell Street in mid-July.

There is a fundamental problem with this genre-blending aesthetic. To simplify music history: The intention of jam music is a sort of transcendence, the intention of Americana is identification, and the intention of blues is toe-tapping salvation. When most bands attempt to channel these three influences in a single moment, the individual effect of each one is lost. The Grateful Dead pulled this off seemingly without effort, and it set their music apart from anything else. Ever. Such skill is rare.

But the Aerolites sound comfortable and content in their already-carved-out groove — just riding the snake. These kinds of jam-band songs seem to write themselves on the front lawns of this town.

The sounds you will encounter on The Aerolites are familiar, well played and easy on the mind. The album is chock-full of bouncing bass lines and playful guitar solos, but they just don’t demand the listener’s attention. You can hear something there, but it simply glides over your ears and is gone. The same goes for Jeremy Harple’s often fast-fast-fast vocal delivery.

Perhaps this fleeting lightness is the music’s purpose. If so, the Aerolites succeed — this sounds like the soundtrack to a pleasant Burlington night. They’re not demanding your full attention; they just want you to half listen and relax.

But when taken out of that background-music setting, The Aerolites demonstrate all too well that bands can do everything technically right — and with a great amount of skill — but if they don’t take risks, their songs are quickly carried away, like a Frisbee on a crisp summer breeze.

The Aerolites play the Monkey House on Wednesday, May 2.