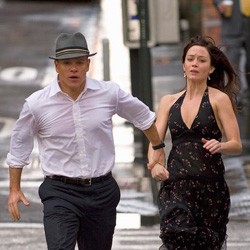 Has an artist ever been more ahead of his time than Philip K. Dick? To put it kindly, he was not properly appreciated in his day. Dick’s prose may have been no great shakes, but the premises of his stories and novels have proved so consistently original and mind bending that he’s among Hollywood’s most reliable go-to guys — despite the fact that he hasn’t actually been among us for almost 30 years.

Adaptations of Dick’s work have generated more than $1 billion in revenue and spanned the gamut from the immortal (1982’s Blade Runner) to the immaterial (2003’s Paycheck). The failure of the latter group of films, of course, has less to do with the sci-fi author’s shortcomings than with the industry’s. In the case of The Adjustment Bureau, the source material and those mining it prove a fortuitous match.

Talk about adjustments: Making his directorial debut, screenwriter George Nolfi (Ocean’s Twelve, The Bourne Ultimatum) has appropriated primarily the hook of Dick’s 1954 story about an insurance company employee who arrives at work one day to find that a team of mysterious men have turned the place and its people into gray ash. They’re in the process of tweaking things to get them back in line with some remote-controlled master plan.

In Nolfi’s tweaked version of the story, the central character is now a present-day New York politician played by Matt Damon, who suffers a career setback at the same time his path crosses that of a professional dancer, played by Emily Blunt. He’s not sure whether he’ll give his congressional run another try, but he’s immediately committed to campaigning for her heart.

This is where those mysterious men come in. A vast agency of quasi-angels somehow blends into the world of mortals, even though its minions carry ledgers tracking the life plans of the humans to whom they’re assigned. More conspicuously, they dress like characters straight out of “Mad Men.”

Which is funny, because one of them — John Slattery — actually is. His fellow otherworldly operatives include The Hurt Locker’s Anthony Mackie and the ever-menacing Terence Stamp. Their primary mission appears to be preventing Damon and Blunt from upsetting some cosmic apple cart by ending up together. If you’ve seen the movie’s trailer or TV spots, you’ll very likely have the impression this involves much chasing and healthy heapings of lethal force.

That’s The Adjustment Bureau’s pleasant surprise. While there’s no shortage of surreal pursuits (wear one of the agents’ special fedoras, and you can pass through an ordinary door to find yourself anywhere in the world), the film is infused with an unexpected warmth and gentleness of spirit. What Nolfi has given us is less an Inception-style action thriller than a good old-fashioned love story, a picture about two people overcoming obstacles to be together. The obstacles just happen to be shadowy, flannel-suited dudes with superpowers.

Damon and Blunt are great together, and the first-time director displays a natural gift for pacing, as well as a knack for dialogue that keeps things grounded in a credible reality. That’s no small feat, given the subject matter. As a rule, you don’t go to a picture inspired by Dick expecting to find yourself watching the feel-good film of the year. But that’s just one of the ways in which The Adjustment Bureau is likely to exceed your expectations.