The Abbey Group Prevents Vermont Politicians From Running on Empty 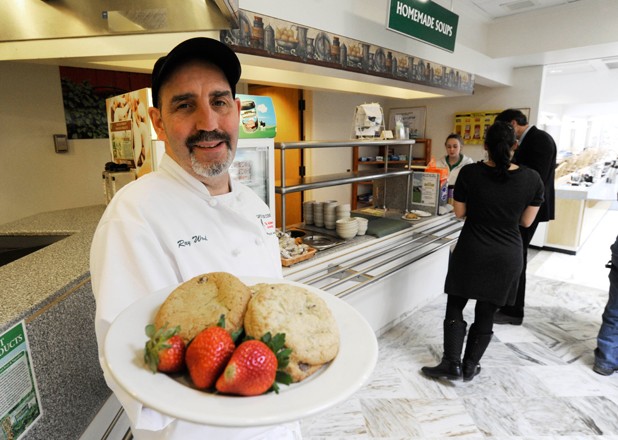 Most people who consider a career in politics are in it to serve their communities. Some are just bossy. But the Vermont Statehouse offers its denizens other rewards besides public service or making history: Ray Wood’s chocolate chip cookies.

Wood, executive chef at Montpelier’s Capitol Food Court, perfected his recipe during his 11-year tenure as chef at Berlin’s historic Wayside Restaurant. His cookie crackles at its edges, giving way to a soft, chewy center dotted with semisweet chocolate chunks. It’s a cookie worth traveling for, or even nabbing a senate seat.

At the dawn of this year’s legislative session, Seven Days spent a lunch hour at the busy cafeteria that feeds 500 to 600 politicians, lobbyists and pages every day from January through May — and is open to the public.

For seven years, food-service company the Abbey Group has been the force behind the locally focused fare in Montpelier, with Wood in charge from the start (the group had an earlier, three-year contract there before its current regime). The cafeteria is active all year except for a brief recess in July.

The Statehouse is far from the Abbey Group’s only cafeteria account. The Sheldon-based business manages nearly 80 institutional sites around the state, as well as a few across the border in New Hampshire and New York. Its story began in 1982 when Sheldon native David Underwood returned home from California and purchased the spacious Abbey Restaurant.

“I realized I was going to have to diversify and not rely on being in the middle of nowhere,” Underwood recalls. He expanded his restaurant to include a banquet hall and began offering off-site catering.

Bolstered by that success, Underwood put in a successful bid against corporations Sodexo and Aramark to feed students at his alma mater, Bellows Free Academy. In the quarter century since, the company has ballooned; it now employs nearly 450.

According to Underwood, the key to the Abbey Group’s success is that each location adapts to its community. Individual chefs work with nearby farmers as well as with bigger suppliers, such as Reinhart FoodService and Burlington Foodservice Company, to include Vermont products on menus whenever possible. Available dishes also vary by location. For example, Abbey Group cafeterias in the Winooski school system always offer options to fit the dietary needs of the diverse religions represented there. Underwood takes pride in having insisted on whole-wheat baked goods and lots of fruit and vegetable options in his school cafeterias long before the government mandated them, he says.

And what about feeding the people who make the laws? According to Gerry Morris of lobbyist group Morris & DeMag, Capitol Food Court at lunchtime feels like an oasis in the middle of a hectic day. “This is our second home, and [Wood] makes our home-cooked food,” says the man whose clients include Entergy, the company that owns Vermont Yankee. “It’s very comfortable.”

Morris says his favorite dish is Wood’s American chop suey with a side of “Italian coleslaw,” a vinegar-and-dill cabbage salad available on the salad bar. He’s not even Capitol Food Court’s most devoted fan, though. Senate Minority Leader Bill Doyle (R-Washington) is.

While several dishes at the cafeteria’s grill station have government-themed names, such as the Committee Chicken Cordon Bleu and Fiscal Fish and Chips, the only one named for a legislator is Senator Doyle Dogs. The senator’s love of red onions inspired Wood to name the pair of hot dogs smothered in them and topped with Cabot cheddar after the 87-year-old. Does Doyle regularly feast on the franks? “When he’s here, he gets soup,” Wood says.

And Doyle is there a lot. “He’s here basically every day of the year,” says Wood with visible affection. “I’ve actually been closed on a holiday, and I’ve come in and made him something so he can have something to eat.”

Subsisting on Wood’s soups isn’t a bad thing. His cream of mushroom soup is meaty with thin strips of fungi in a hearty broth. When Seven Days visited, that was the first option; the second was a potage of Boyden Farm beef and rice. The special of the day was a tangy chili with just a hint of burn, served with a thick square of airy maple cornbread.

Wood’s seven employees prepare practically everything in-house except the buns for burgers and the breads for made-to-order deli sandwiches. (They might make those items if they had more space, Wood says.) The superior quality of homemade products isn’t the only reason for the from-scratch ethos. Wood explains that it’s significantly cheaper to prepare his own dressings or make his own white-chocolate-raspberry scones than to buy the equivalent elsewhere.

Unlike many cafeterias located in state institutions such as schools, Capitol Food Court is not subsidized. But the prices are still remarkably low. A Misty Knoll Farms chicken breast, moist from being marinated in-house and enrobed with Cabot cheddar, goes into a $5 sandwich. A Boyden Farm burger costs the same.

With or without local lettuce, the salad bar can get bogged down with long lines of people waiting to sample about 30 items, including crisp-edged tofu cubes, Spanish rice and a selection of big-flavored homemade dressings (the maple-balsamic is especially good). “When the chambers empty out, guess where they go?” asks Underwood, who is perpetually on the road, traveling from site to site. At the Statehouse, he says, “You don’t have anybody in line, and, all of a sudden, you’ve got 200 people in line.”

The rush doesn’t prevent diners from getting individual attention. Wood says some Statehouse regulars have the same order every day; he starts preparing their meal as soon as he sees them enter the lunch line.

Rep. Mike McCarthy (D-St. Albans) knows a thing or two about food. He and his family own Cosmic Bakery & Café in St. Albans, which serves lunches not too different from the turkey wrap he’s enjoying at Capitol Food Court on a recent Thursday. As he settles in for lunch, he marvels, “Especially when you consider the reputation that normal institutional food has, they really keep things moving here and give you some options. The staff is really friendly and great, and I think they know what they’re doing.”

Wood agrees that his staff is a great support. Two have worked with him since Abbey Group began serving at the Statehouse. Others came on board through the Vermont Association of Business Industry and Rehabilitation, from which Wood hires an employee each year.

It’s not just the ease of getting to know the faces behind the service line that gives Capitol Food Court a small-town feeling. Sometimes legislators contribute to the menu: Wood says the most popular lunches are plates of braised brisket supplied twice a session by Rep. Harvey Smith (R-New Haven) of New Haven’s Smith Family Farm. To personalize diners’ experiences, Wood plans theme days, such as a Polish-Ukrainian lunch of pierogi and bigos he recently served to celebrate the ancestry of several legislators.

All this improves the quality of life for politicians stuck “on campus” throughout the session. Wood keeps their ideals in mind, too. Besides sourcing locally whenever he can, he seeks to keep waste to a minimum. “We recycle everything here,” says the chef. The kitchen is working to refine its already successful compost program. “We all work together to make this the best place it can be,” Wood says of the Statehouse.

Whether the diners are a group of African dignitaries having their first taste of America or 45-year veterans such as Doyle, the Abbey Group makes sure everyone who enters Capitol Food Court gets a wholesome meal. Preferably finished off with a chocolate chip cookie.

The original print version of this article was headlined "Capitol Chow"