In this newspaper we commonly make lists of seven, rather than the more typical 10. Admittedly, the smaller number makes it harder to winnow out favorite shows from, in this case, an entire year of art viewing. So, some selections are based not just on the artwork itself but on a compelling contextual aspect of the exhibition.

In addition, we considered only Vermont-based artists. (Apologies to out-of-staters who exhibited some fine work here this year.) And, a caveat: These selections were drawn from shows we were able to review in Seven Days. There was so much more art to see in 2021 — big thanks to the artists, gallerists and financial supporters who made that possible — and viewers surely had their own favorites. Here are seven of ours.

The strictures of social distancing led to a creative solution for art viewing: VSC's visual arts program manager, Kristen Mills, left the lights on at night so passersby could see Neckers' exhibit through the gallery's tall windows. Inside, his riotously colored, found-metal structures looked kindergarten-safe — until you noticed the silhouettes of tanks, missiles and warships. The installation called to mind kiddie cartoons that embedded darker themes for the grown-ups. (A truncated version appeared in "Bubblegum Pop" at Burlington's BCA Center in the summer.)

Kevin Donegan, "Your Cart Is Empty," Flynndog Gallery in Burlington

Timed for the South End Art Hop, Donegan's exhibition was a testament to resourcefulness and environmental prudence. But the artist had a broader theme in mind. Using the spare iconography of shopping carts, recycling bins and trash cans, as well as the "medium" of detritus, Donegan assembled a reflective, provocative exhibition. The metamorphosis of found materials was ingenious. Donegan's generative topic — what we acquire and what we throw away — confronted viewers with the human cost of our squandering, as well.

This title referred not to a single exhibit but to a reworking of the museum's acquisition and exhibition mission, as well as the use of its spaces. Fleming staff took advantage of a pandemic-induced closure to think deeply about how its practices have reinforced notions of white supremacy — and how to move forward with more inclusiveness. They also created a strongly worded values statement called "A Living Document of the Museum's Reckonings and Transformations." In addition to their laudatory commitment to the necessary evolution of museums, the staff curated engaging exhibitions of works from the permanent collection.

Though modest in size, this exhibition of six sculptures was visually compelling and conceptually potent. In achingly eloquent ways, the Norwich artist, who is biracial, addressed the current national reckoning with systemic racism. Three pieces specifically referenced Black men killed at the hands of police. More abstract works fashioned primarily from wood strips were each held together with a workshop clamp. The tool became a metaphor for America's aspirational motto, e pluribus unum — "out of many, one" — and for the fragility of that pluralistic ideal. The taut energy of Ransom's pieces seemed to hold both promise and threat of what might be.

For the 13th edition of this annual exhibition, cocurators Nel Emlen, Allyson Evans and David Schutz chose works that honored the makers of yesteryear. Some 250 pieces by 20 Vermont artists filled the rooms of the historic building, some depicting or repurposing antique tools. From paintings of old mills to handmade hats to sculptures using boulders or contemporary technology, this indoor and outdoor show invited a consideration of human ingenuity, as well as admiration for beautifully made things of the past and present.

Adapting to the pandemic-era necessities of fresh air and social distancing, HCA sited sculpture — including a painted bedsheet installation by Bread and Puppet Theater's Peter Schumann — around its grounds and neighboring fields for "a pandemic-escape experience not to be missed." Art adventurers, traveling by snowshoe or cross-country skis, warmed up around fire pits with grilled-cheese sandwiches and hot bevvies.

"It's Smaller Than I Thought," group exhibition at Safe and Sound Gallery in Burlington 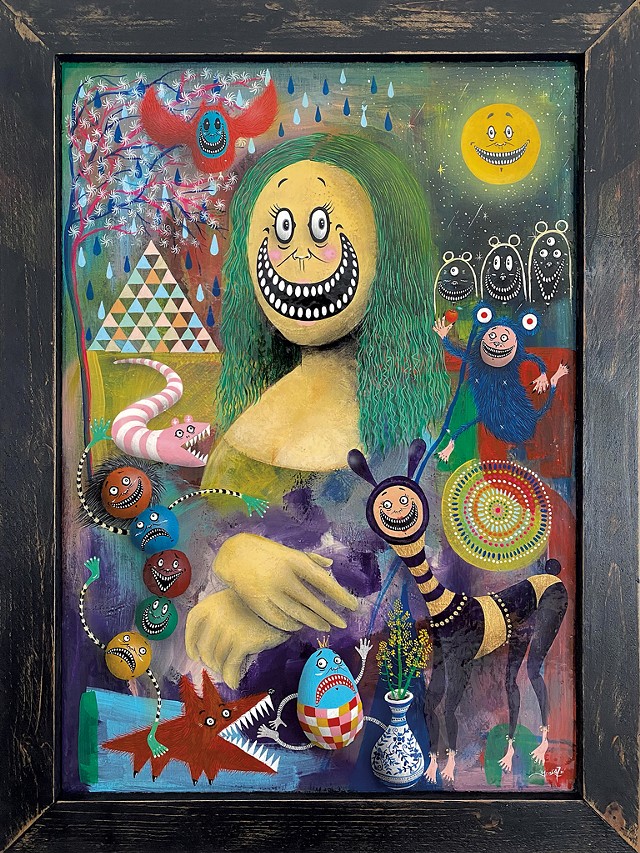 Perhaps it's the vaunted reputation of "Mona Lisa" — arguably the world's most famous painting — that leaves many visitors to the Louvre in Paris surprised by its relatively modest size. The winking title of this show gives away its theme. Gallery owner Marin Horikawa invited 60 artists to riff on Leonardo da Vinci's 1503 portrait; 15 of them responded, and the results could not have been more wildly diverse. The artists naturally worked in their signature styles and mediums, including collage, oil, pastel and print. Renaissance Lisa would likely not relate to most of their creations. The exhibit was not necessarily intended as a response to the pandemic, but how could it not be? As one of the first local shows to open for in-person viewing, the collection was a satisfying jolt of provocation, fun and catharsis.

Related Art Review: 'It's Smaller Than I Thought,' Safe and Sound Gallery

Art Review: 'It's Smaller Than I Thought,' Safe and Sound Gallery
By Pamela Polston
Art Review

The original print version of this article was headlined "Top Seven"