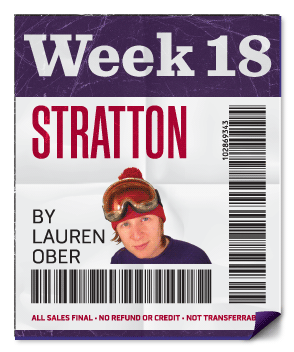 Stratton is like the Stowe of southern Vermont. Not in terms of terrain — Stowe is far more challenging than its flatter cousin — but in overall vibe. Like Stowe, Stratton’s lodges are classy, its ski village posh. Both resorts evoke an image of well-to-do-ness.

But what Stowe lacks is the biggest snowboard competition this side of the Olympics. Since 1985, Stratton has played host to the Burton U.S. Open Snowboarding Championships, the final stop on the Burton Global Open Series tour. I figured my challenge wouldn’t be complete without checking out the Open, so I headed down to the resort to take in the halfpipe competition.

In the nicest possible way, I’d call the U.S. Open a total junk show. Thousands of people had descended on the resort to scope out snowboarding’s hottest stars — Shaun White, Louie Vito and hometown heroes Hannah Teter and Kelly Clark. The vendor village was mobbed, as was the corral in front of a stadium-worthy jumbotron. On Saturday, the last day of pro competition, bluebird skies and 65-degree weather helped ensure maximum turnout.

There are two ways to get to Stratton’s monster halfpipe, which sits about a quarter of the way up the Sunrise Supertrail. You can take the zippy six-person lift to the top and snowboard down, or you can walk. I decided to hoof it with the common folk.

When you watch a halfpipe competition on television, it is impossible to get a sense of just how huge it is. This pipe is 500 feet long with walls that soar 22 feet in the air. When riders hit full speed in the pipe, they reach dizzying heights, the equivalent of jumping from a three-story building.

Around the bottom of the pipe, spectators fanned out like a delta, hoisting signs that read “Go Kelly Go” and “I Ride 4 Kevin” — a shout-out to Vermont pro rider Kevin Pearce, who sustained a traumatic head injury earlier in the season. Since I’m not much for crowds, I continued hiking to watch from the top of the halfpipe wall. I managed to stand directly behind a security guard, whose bright yellow jacket ended up in just about every photo I took.

Kelly Clark and Kazuhiro Kokubo took home the halfpipe awards in their respective competitions and each nabbed a tidy purse of $20,000. Not bad for a day on the slopes. Shaun White sat out the finals because of illness, which was a bummer for us ginger-haired folks looking to catch a glimpse of our carrot-topped leader.

By the time the halfpipe competition was over, it was almost 4 p.m., I hadn’t gotten a ride in yet, and the lifts would soon close. Swept up in all the flipping and twisting, I’d forgotten why I was there — to ride Stratton. But my board was in my car two miles away. Awesome planning on my part.

I raced down to the rental office and begged them to let me take out a board for a half hour. The man behind the rental counter finally relented on the condition I get the board back by 4:30, because he wanted to go home. Deal.

I hopped on the Sunrise Express lift with four ’tweens, one of whom, I learned, was a “model.” These little boys and their female model friend were the kinds of kids you hope you never have — foul-mouthed, flatulent trolls.

While they screamed profanities to the kids on the chair in front of us, I pulled my hood over my head to conceal my identity. Just as I did, a snowball launched from the trail below pelted me in the chest. The snow sprayed my face and fell into my jacket.

My liftmates snickered. “I suppose that was intended for one of you,” I said, brushing the snow off my front.

Silence. The model guzzled her colossal can of energy drink. The boy next to me looked at my cheap rental board with derision. The lift ride could not have ended any sooner. Eighteen down, two to go.