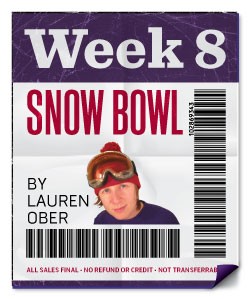 Not many colleges can boast that they own a ski area. In fact, only four can — Dartmouth, Middlebury and two community colleges in Michigan and California whose ski areas’ combined vertical totals 1000 feet. So Middlebury students should count themselves lucky that not only do they have access to a ski area, but it’s actually worth visiting.

If you’re not a member of the Middlebury College mafia or an Addison County resident, chances are you’ve never skied or ridden at the Snow Bowl. And that’s the way the regulars like it. As long as most people head for bigger mountains, they won’t have to wait in line at the Bowl’s three lifts.

On this weekend day, George Lawrence and his 9-year-old daughter, Erin, agreed to serve as my tour guides. When Lawrence isn’t helping ski areas become more energy efficient through his job with Vermont Energy Investment Corporation, he’s a ski instructor at the 75-year-old Snow Bowl. When Erin isn’t in school — she’s a fourth grader at Addison Central — she’s a mini ripper, hitting all the little jumps and pockets of freshies she can find.

We started the day with a few runs off the Sheehan Chair, a double lift that accesses four runs and some glades. If you’re coming from a larger mountain, you have to get used to the Snow Bowl’s quaint size. The trails don’t go on for an eternity, but you also don’t run the risk of colliding with a denim-wearing Joey from New Jersey who is skiing in a tuck.

We headed down Lang, a beginner trail with some spunk. Erin motored ahead of me while her father carved deep turns with his big powder snowboard. Lawrence, 43, lived in Jackson Hole for years after graduating from Middlebury in 1989. He learned to snowboard out there and got a board meant for western snow. As such, his ride is about as tall as I am and probably a little skinnier.

After another run off the Sheehan Chair, we glided over to the Worth Mountain Chair, a new $1.7-million triple chairlift that replaced the 40-year-old double lift last fall. On the way, we had to navigate through the labyrinth of ski racing gear that littered our path. The Snow Bowl is known primarily for two things: its ski school and its racing program. This day was a race day, and I’m pretty sure the Lawrence family and I were the only ones on the mountain not wearing skin-tight Lycra suits.

The exit runoff from the Worth Mountain lift hooks slightly to the left. Naturally, this meant I would fall. Usually, I do not fall when disembarking from a lift. But take a small curve, add a young child whom I do not want to bowl over, and mix in a few hundred pubescent speed freaks in neon speed suits, and it’s a recipe for humiliation.

Sure enough, I tumbled down the exit ramp. Since Lawrence teaches skiing, he’s used to beginners, as well as people like me who just look like beginners. I dusted myself off and followed the pair past the race start at the top of Allen over to Ross, a slick advanced trail that had the best snow of the day by far.

Light granules of humanmade snow sat on top of solid packed powder. Ross is also a race run, but today, thankfully, it was not.

After a few runs down Ross, its blue neighbor Proctor and the iced-over Voter, we had exhausted our options for the day. Since the rain had washed away most of the snow from the advanced trails at the backside of the mountain, we had ridden all we were going to ride.

That was fine with Erin. She had lunch on her mind. As we cruised down Proctor, she let out a joyful bellow. “It’s pizza time!” she yelled, aiming her skis straight for the lodge. Eight down, 12 to go.