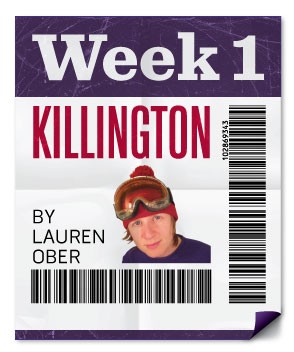 Normally, by this time of year, nearly half of Vermont’s alpine ski areas would be open. Resort owners are happy if they can get their lifts spinning in time for the Thanksgiving holiday. That wasn’t the case this year, and it has caused me some angst.

But after a few anxious weeks of weather watching and hand wringing, I hit the slopes last Thursday. The heavens had opened up just a tad earlier in the week to let a few flakes out, and the temperatures dropped to allow the big fan guns to do their work. This year, in the race to open first, The Beast took the gold.

I’d never been to Killington — Vermont’s largest ski resort — so my anticipation was all the greater. But I worried that the snow would be washed off the mountain by rainstorms that were drenching the state.

When I arrived at the K-1 Lodge, a fanny-packed mountain ambassador looked at me and said, “Are you sure you want to do this today?” Well, no, not really, I thought as rain droplets dribbled down my face. But it’s my mission.

While the sky was schvitzing and most of the trails were barren, the riding was actually quite good. Killington Peak stands 4241 feet, so the coverage at the top was better than expected for the early season.

I took my first few runs on Great Northern, a sleepy, rolling groomer that traverses the top half of Killington Peak before dipping down onto neighboring Snowdon Mountain. It seemed I had forgotten how to snowboard, because not only did I end up on my caboose three or four times while on the green circle Great Northern, but my right boot became dislodged from its binding twice. Embarrassing.

The weather and my riding got appreciably better over the next hour, so when Killington regular Jim Adams offered to show me a few more difficult trails, I was game. Adams, a Plymouth, Mass., resident with a thick Boston accent, skis at Killington at least 50 days a year, weather be damned, and has since he was 14.

We took a few runs on the steep double black Downdraft to Great Northern, and then East Fall. The snow held up well and wasn’t nearly as gummy as I’d expected. It was like a great day of spring riding. Plus, I got to listen to Elton John blasting from Adams’ iPod on the gondola ride up, so what could be better? One down, 19 to go.

Vermont boasts 20 alpine ski resorts. I intend to snowboard at each of them this season. Except for that board-averse Mad River Glen. There I’ll ski, or at least attempt to. Thus, the 20/20 Challenge. It’s my goal to carve a few turns at each of the 20 ski areas in the 20 or so weeks of a Green Mountain winter.

I invented this little challenge for myself because, well, why not? The season is long and cold, and I can’t just sit around for five months watching episodes of “Glee” and “30 Rock” on Hulu. What better way to stave off the winter blahs than by visiting every shimmering jewel in Vermont’s tourism tiara?

Each week, I’ll be reporting on my progress. I’ll also provide some nuggets of information about the resorts and try to figure out what makes a Burke Mountain different from a Suicide Six besides geography and terrain.

If you want to help me with my 20/20 Challenge and show me around your local mountain, please email me...

The Magnificent 7: Must See, Must Do, September 29 to October 5