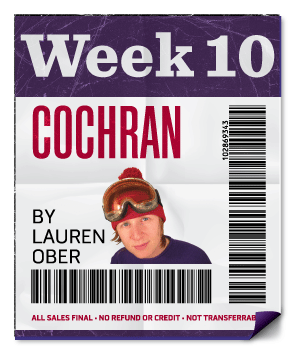 When Outside magazine asked ski racer and Olympic gold medalist Ted Ligety to name his favorite ski resorts, all but one of his answers were unsurprising. He ticked off marquis resorts Park City in Utah, Paganella in Italy, Val d’Isère in France and St. Anton in Austria. Then he name-checked tiny Cochran's Ski Area in Richmond, saying, “They have to have the most U.S. Ski Team-member-to-vertical-foot ratio of any ski area.”

That declaration may come as a surprise to diehard skiers outside Vermont. But here in the Green Mountains, Ligety’s preference for Cochran’s comes as no surprise to the countless people who have learned to ski “the Cochran’s way” since it opened in 1961. One of those skiers is Jimmy Cochran, who is currently competing for an Olympic medal in Vancouver.

As a ski destination, Cochran’s certainly can’t boast the challenging vertical or the higher-altitude snowfall of Vermont’s larger resorts. Hell, it only has five runs, a T-bar and a rope tow. But what it lacks in height and breadth it makes up for in spunk and a sense of family that doesn’t exist anywhere else in the state.

Plus, Cochran’s can claim a gold medalist of its own. Barbara Ann Cochran, one of the four owners of the nonprofit ski area with her siblings Bobby, Lindy and Marilyn, took home gold from the 1972 Sapporo Olympic Games. Her winning Rossignol skis hang from a ceiling beam in the Cochran’s lodge, along with bibs from World Cup races at legendary European slopes such as St. Moritz, Grindelwald, Chamonix and Kitzbühel. Barbara Ann seemed like the perfect tour guide to show me around the hill her parents built nearly 50 years ago.

When Cochran’s isn’t hosting ski races, weekends there are all about lessons. On this day, my new best friend, 6-year-old Mya Greenfield, was getting a lesson from Barbara Ann, and she let me tag along. Lord knows I could use a tip or two. I only get on skis about once a year, and my skill level is somewhere between remedial and passable.

Barbara Ann, whose ruddy cheeks and Nordic sweaters are clear indicators of her avocation, lives for teaching little kids. Somehow, the pizza-pies-and-French-fries technique never gets old.

All new skiers who come to Cochran’s learn how to do race turns, even ones with no desire to race. That way, Barbara Ann said, skiers can feel confident handling any terrain.

But before we began our race turns, Barbara Ann, 59, posed “an adventure” — her term for a challenge used to help new skiers get over their fear of steep terrain. Atop one of the runs sat a giant pile of snow. Barbara Ann sidestepped up it and encouraged Mya and me to do the same. Then she told us we would ski off it. Mya seemed game; she clambered up the side of the snow mound and gracefully skied off the other side.

After about two minutes of instruction, we were both making race turns like pros. I was skiing with an Olympic gold medalist, one of only 11 American skiers to have achieved such a feat, and it was thrilling. Ten down, 10 to go.