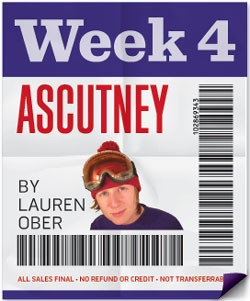 Here is something I learned on a recent trip to Ascutney Mountain Resort: Don’t snowboard with equipment you’ve never used at a mountain you’ve never been to. It only makes for a miserable experience, and leads smarmy lifties to ask, “Ya gonna take another stab at it, are ya?” as you head up for another run.

The night before heading to Ascutney, I tinkered with the bindings on my snowboard. As I was congratulating myself for my industry, the highback from the left binding fell off in my hand. This was not a welcome development. I had already made plans to ride at Ascutney the following day, and I couldn’t cancel. So I made do with a borrowed board.

As I pulled into the Brownsville resort, the bluebird sky suggested it would be a pleasant day to take a couple of turns. But the car thermometer read 3 degrees Fahrenheit, and the thought of planting my sweet one on a frozen chairlift was enough to make me want to turn around and go home.

My car was one of only seven in the parking lot. At least I would have the mountain to myself, I thought. Just me and Charles Bronson’s ghost, tearing up the slopes. (The legendary Death Wish I-V actor is buried near the resort.)

When I went for my lift ticket, a Spanish-speaking man with a heavy accent greeted me. I asked him where he was from. He told me that he and the other half-dozen fresh-faced Spanish speakers who were huddled around the fireplace were Chilean and Peruvian college students working at Ascutney during their summer break. They could not have looked more out of place as they sat there shivering in their parkas and boots listening to reggaeton music.

On this weekday, Ascutney had an eerie feeling about it. The snowmakers spewed plumes of fine mist into the air, and the lifts went round and round, devoid of passengers.

The resort, located on the northwest face of the 3143-foot peak, is a locals’ mountain. That’s not to say it doesn’t have some gnarly terrain. It’s jam-packed with rocky granite drops shoehorned between stands of evergreens.

Because coverage at the top of Ascutney wasn’t great, the Snowdance lift only went up mid-mountain. Slowly, I picked my way down Lower Exhibition. It was hard-packed snow, groomed so the corduroy ruts were as deep as roadside culverts. I hate corduroy — not on trousers, but on snow. It makes everything so much more sketchy.

For a groomed intermediate trail, Lower Exhibition is surprisingly steep, as is its neighbor, The Plunge. The corduroy tracks made it difficult to steer, and the fact that my toes were hanging over the ill-fitting board by about 3 inches did not help. I felt like I was riding a toothpick over a glacier.

When I got to the bottom and pulled into the lift area, the attendant laughed as I struggled with the unfamiliar bindings. “That looks like a lot of work just to get out of those things,” he snorted. I tried to explain that it wasn’t my board and I was riding it because mine broke, but he didn’t really care. He just wanted to go back inside his hut and do whatever it is that lifties do in there.

I took a few more runs down the groomed trails, then tried my luck with the untended slopes. Unwise. Cruise Control, Screaming Eagle and Buttermilk were all covered in a thick, frozen crust. I couldn’t articulate the righthand turn, so I just cut across the mountain, skittering along skiers’ left. A couple of near somersaults later, I was ready to head home. But not before falling down the hill outside the lodge and then pitching myself down the stairs on the way to my car. Four down, 16 to go.