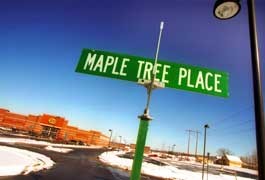 You would have thought Maple Tree Place had everything going for it. Robert Burley was the chief designer of the Taft Corners project intended to become the town square of Williston. The dean of Vermont architects and a member of a prestigious national college of visionary fellows, Burley came to Vermont in 1964, fresh from serving as designer-in-charge of the famous Saint Louis Gateway Arch in the office of the fabled Eero Saarinen.

Burley’s list of successful projects is particularly impressive because of its breadth — it includes the Pavilion Office Building in Montpelier, the 1987 addition to the Statehouse, the Bailey-Howe Library at the University of Vermont and the expansion of the Woodstock Inn. He has a demonstrated ability to innovate in the spirit of Saarinen, who is famous for the eagle-like TWA Terminal at Kennedy Airport and the widely copied Dulles Airport as well as the Arch. Burley can also remain staunchly faithful to the notion of historic preservation when appropriate. Not many architects can do both these things.

Ambitious aesthetic expectations for Maple Tree Place can also be traced to its place of birth. Burley first dreamed up the plan for the Williston development while at Taliesin — among the holiest of sites where American architecture is concerned. Located in Spring Green, Wisconsin, Taliesin was the home and studio of Frank Lloyd Wright. The 600-acre estate he designed is a living example of his uniquely American — and now revered — organic architecture. Wright’s vision is difficult to summarize, but it relates to design that eschews mere decoration and historic imitation in favor of creating buildings that seem to grow naturally out of their landscape.

Burley was no mere visitor to Taliesin. For three years, he divided his time between his Waitsfield-based practice and a job as the first executive director of the Taliesin Preservation Commission. His mission was to save an architectural shrine, in other words, and while he was at it, the plans for Maple Tree Place took shape.

Unfortunately, Maple Tree Place is no Taliesin. It doesn’t come close to a Gateway Arch. And it’s nothing like the charming former one-room schoolhouse that serves as Burley’s office. Maple Tree Place is mostly just another quantum of Williston sprawl, built as cheaply as possible while still complying with Act 250. Burley, and every other person who cares about the built environment in Vermont, will have to content themselves with the knowledge that the project might have looked even worse if he hadn’t been involved.

“Everybody had to recognize that Taft Corners was going to be developed,” maintains Burley, who figured he could at least ensure that the inevitable did not become the completely irresponsible. To that end, he points now to the custom-designed details of Maple Tree Place — the brickwork, the concrete lintels above the windows, the decorative cornices crowning the façades, the pedestrian arcades, even the very existence of a second story on some of the buildings. These details distinguish the project, he suggests, from the surrounding mass-produced structures — Wal-Mart, Hannaford’s, Home Depot, Circuit City, Toys R Us — that have made Taft Corners just another American paradise lost and paved-over.

And, Burley says, gesturing toward the plans he drew for Maple Tree Place, “we got this” — the arcaded, dignified, pleasantly proportional two-story buildings arrayed around a cozy town square — “in exchange for this.” He points to the 100,000-square-foot box, home to Staples, Dick’s Sporting Goods and Linens ’n’ Things — a monstrosity that Burley will not even refer to, much less defend, as architecture. According to him, this was the quid pro quo insisted upon by Starwood Ceruzzi, the project’s Connecticut-based developer-owner, before it would agree to build the higher-quality, slower-to-pay-back town square that the architect and Williston town officials desired.

To see the virtue in Maple Tree Place, suggests Burley, picture the historic town square of South Royalton — a pleasant little park surrounded by vaguely Victorian, 19th-century commercial buildings. The Burley-designed complex emerging around the Maple Tree Place version was designed to capture some of the same human scale and architectural texture of the whistle-stop village in Windsor County.

As Burley imagined it while at Taliesin, this town square was to be the center of a constellation that would warm the hearts of Geography of Nowhere author James Howard Kuntsler, architects Andres Duany and Denise Plater-Zyberk and other so-called “New Urbanists” who revere the traditional forms of New England villages. Around this cozy core would orbit, in essentially concentric rings, commercial buildings and an outer layer of residences and parking areas — all generously endowed with pleasant, life-affirming shade trees. The aforementioned big boxes were to be consigned to a realm roughly analogous to where Uranus lies in the solar system — that is, the distant perimeter, beyond the vast nothingness of the development’s major parking areas.

But the devil at Maple Tree Place is in the dumbing down of the details. The current edition of the site plan shows far fewer trees and significantly more parking areas than Burley first envisioned. The originally planned pitched roofs have yielded completely to the kind of flat-topped buildings that are absurd in New England winters. In today’s world of mass-produced, make-a-fast-buck design, there is apparently no room for variation between, say, Williston, Vermont, and Waco, Texas. Site-specific architecture is sacrificed for precisely the same reason that every Big Mac and Whopper in the nation must be identical. As Eric Schlosser eloquently pointed out in his book, Fast Food Nation, uniformity — whether in burgers or buildings — is both soothing to the consumer and cheaper for the developer.

In support of his it-could-have-been-worse position, Burley invokes his vocal opposition to the Pyramid Mall that was slated to occupy this site a couple of decades ago. He remembers that, as the developers sought to gain approval from a justifiably skeptical community, they designed a “typical mall inside” that cleverly used earthen berms on the outside. They were “basically trying to hide the mall,” he says.

“In Vermont, people expect buildings to say what they’re doing,” Burley posits, adding that at Maple Tree Place, “you see the truth of the buildings.”

Truth, however, is a relative concept. Yes, the Burley buildings — which comprise all the major commercial structures at Maple Tree Place except the Shaw’s Supermarket — do not pretend to be Swiss chalets or Queen Anne-style mansions or classical Greek temples. They are as forthrightly commercial as the buildings in downtown South Royalton — but here’s the fallacy, common to all of New Urban-ism: Places like South Royalton were organized around the railroad and pedestrian-oriented village life, things that have been sacrificed to automobile-oriented living. A truly honest shopping-center architecture would eschew nostalgia and find a way to humanize and celebrate auto-centric public life.

Moreover, even if one buys into Burley’s somewhat more selective sense of architectural truth, Maple Tree Place still deserves to be flunked with fervor. The reason: Best Buy. Unlike the big box across the parking lot containing Staples et al., the huge Best Buy structure cannot be explained away as the devil’s end of the Faustian bargain. It stands at the left ventricle of this complex, physically connected to what will be one of the buildings fronting the emerging town square. It’s a veritable festival of superficial design fakery.

For no apparent reason other than as a limpid gesture toward visual variety, the front façade of Best Buy is topped by nine distinct cornice segments reaching six different heights. Dash around the side or back of the building and one can clearly see that the building itself is a predictably uniform height. These varying cornices are mere billboard decoration, pure artifice, designed to obscure rather than express the truth of the buildings in the sense Burley means.

The effect of the dissembling cornices is echoed in the façade beneath them, a seemingly random essay in banded cement spandrels, vestigial inlaid arches and pseudo-pilasters. None of this would be so terribly galling — after all, as Burley notes, Wal-Mart and other architectural outrages in the immediate vicinity are far worse — if Maple Tree Place were not representing itself as a kind of responsible, Act 250-affirming alternative to all that mindless sprawl.

The mall moguls of Starwood Ceruzzi think you can’t tell the difference between the way Best Buy uses brick and the way the Zimmerman House in Man-chester, New Hampshire, does — to cite the nearest example of Frank Lloyd Wright’s work. They assume that even Vermonters who can rattle off the text of Criterion 8 of Act 250, which enshrines notions of beauty in land-use law, are oblivious to notions of proportion and the relationship between architectural form and architectural function.

Taliesin, Zimmerman House and everything else Wright designed are landmarks today. They achieved that status not because Wright was trying to fool people into thinking his buildings were honest variations on historical themes. To the contrary, Wright designed for the future, not for the past. So too is Robert Burley hoping that his plan for Maple Tree Place, with its neighborhood-like scale, mixed uses and effort to make a shopping center look and work more like a village, will endure long after the investors have cashed in on their investment.