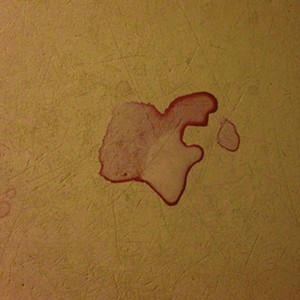 It's been almost three years since we've heard from Thai BlueJeans Salesman, the psychedelic-folk project of Poultney-based musician Tim Halteman. His 2016 LP, Isla Hormiga, was a sort of hodgepodge of textures that worked as often as it didn't but displayed no shortage of creative bravery.

On his latest release, One Thousand Miles of Mud, Halteman has found a way to harness his oddball compositions and sonic experimentations into a much more coherent final project — despite its scant 15-minute runtime. The EP is threaded with daring. But that audacity is tempered by a guiding hand, if not contained by the recording's brevity.

"@one" is a strange nugget of folk-pop. It begins with Halteman singing tremulously over a piano figure but winds down as a sort of early-1970s Pink Floyd cut, all sunny jangle and laid-back percussion. His use of space on the track is as economical as it is inventive.

The instrumentation on the new EP takes a step up from his earlier work. "FranticTongues Put Wants Into OneSky," sounds like what might happen if King Gizzard & the Lizard Wizard recorded in an abandoned shack in the woods. The cut features some delightfully odd percussive twists, not to mention a deranged melody of Halteman singing the words "sun worship" over and over in falsetto. Throughout the EP, snatches of low-key synths, distorted guitar lines and loops color these strange songs like little character details.

Halteman offers a beautiful tribute to his dog on "YellowLight" — a song so dedicated that the songwriter takes his pooch's side after she bites the mailman. "And in the morning when I'm all right / We walk together in the yellow light," he sings just before a heavenly chorus beams down like a ray of sun. If Halteman has a defining trait as a vocalist, it's a kind of detached melancholy, which he often uses to great effect.

"LovingTimes 'neath the Shadows" plays out like a scene in a noir film. Tension-filled xylophone pings back and forth with the keys, making a seedy melody that evokes skulking through alleyways and staring through peepholes. Instrumental tracks like this make one wonder what Halteman might do if given a film to score.

One Thousand Miles of Mud wraps up with the quirky, drugged-out "Smell of AchingWater." At just under four minutes, it's by far the most fleshed out of the EP's five songs. And all of Halteman's weapons are on display. He sings in a conversational tone, urging the listener to stop being afraid of the forest and to stop being presumptuous about what might happen. Perhaps due to the song's dirge-like nature, it's a meandering lesson that somehow still plays out as wisdom.

"Stop being afraid of the dark / It's just a lack of the sun," he sings. The EP ends in a lovely piece of music that almost sounds like a prayer — or maybe a lost Grizzly Bear song.

Once again Halteman, as Thai BlueJeans Salesman, has delivered a healthy cut of weird. What's new is that his weirdness carries added subtext, buoyed by clever arrangements, which creates a unique musical experience.

Speaking of Thai BlueJeans Salesman, One Thousand Miles Of Mud