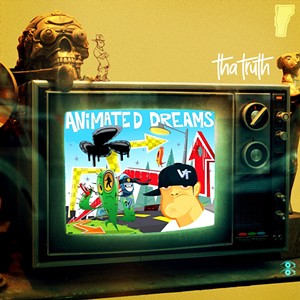 Tha Truth arrived in Vermont back in 2006, and the rapper has been an integral part of the local hip-hop scene ever since. Known to friends and family as Warren Stickney, he's a genre superfan. Whether it's a local lineup in some bar basement or a national act coming through Higher Ground, he is there and he is psyched. He's also a tireless cipher veteran, always ready to freestyle and looking to build.

All that energy and devotion pays off big on his debut album, Animated Dreams, which dropped last month on Burlington hip-hop imprint Equal Eyes Records. It's easy to tell this project was a long time coming. Tha Truth positively overflows with ideas track after track, eager to share his testimony with the world.

Rhode Island beatsmith ShoKass produced the LP and brings a distinctive, sideways style to the table. His compositions are more about building space and creating a feeling than beating you over the head with drum loops, so he's the perfect partner for this psychedelic voyage.

And it's a voyage, for sure. This track list is a complex recipe, by turns whimsical, philosophical and emotionally raw. In addition to his thematic range, Tha Truth is an unusually flexible MC. His flows can be simple and straightforward or tongue-twister intricate. In short, he goes where the beat takes him. (He even sings a few hooks.)

Tha Truth is also a responsive collaborator, feeding off the energy of his guest rappers. On "Winds of Change," he pairs with Just Cauz, part of southern Vermont's 4 Horsemen crew, for a samurai-flavored revenge tale that's one of the bluntest bangers on the album. Then there's the surreal claustrophobia of "Am I Human," a portrait of anxiety and alienation that features Pro of Burlington hip-hop legends the Aztext. Both artists deliver a tightly written flurry of layered wordplay.

Album highlight "Get Back" opens with an urgent, extended verse that sets the bar high and then features 802 heavyweight and Aztext cofounder Learic, as well as New Jersey spitter Ren Thomas, a rising underground star. It's a gloriously greasy beat and proof positive that Tha Truth can hold his own alongside just about anyone.

Yet competition doesn't interest him much. Animated Dreams makes it clear he wants to speak his own truth, not dunk on rivals. That attitude, along with his mic skills, is why he's long been a part of AZT Fam, the extended crew that's grown around the Aztext.

But to my surprise, this debut is far from a true-school hip-hop extravaganza. It's a deeply weird and extremely personal project. And rather than "keeping it real" like a grumpy old rap head, Tha Truth and ShoKass embrace modern sounds and make them their own, from trap to emo to EDM.

All of these threads come together on album closer "Please Don't Tell Me," a devastating autobiographical cut about grief and loss. It sounds both timeless and modern, the perfect capstone for such an ambitious album. Animated Dreams is an unexpected gem.

The album is available on Spotify and at equaleyesrecords.bandcamp.com.