Norwich grad students explore the roots, and remedies, of terrorism 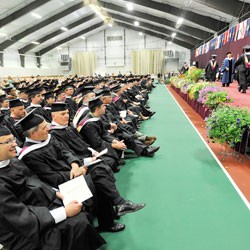 When it comes to international terrorism, Jocolby Phillips has seen it up close. During his deployment to Iraq in 2005, one of his primary tasks was to repair the Americans’ reputation, damaged by years of broken promises. Phillips, a U.S. Army captain assigned to oversee reconstruction efforts in the tiny town of Tounis, 30 miles south of Baghdad, had to keep the local sheiks happy and violence at a minimum. That was no easy task in a region where diplomatic victories were measured street by street, block by block.

“It was tough,” recalls the 29-year-old Kermit, Texas, native. “They see you, and you represent the whole country: everyone in Washington, all the policies and everything that’s gone wrong. You’re the face of those policies, good, bad or indifferent.”

Phillips, who served two tours in Iraq, eventually made some headway against the terrorist cells operating in his area. Working with his Iraqi counterparts, he and the soldiers under his command managed to “pin the rose” on some of the makers of the improvised explosive devices (IEDs) that were so deadly to soldiers and civilians alike. But doing so meant learning to distinguish terrorist operatives who were motivated by political and religious ideologies from those who were driven by financial desperation.

“You have guys who are putting IEDs on the side of the road just to put food on the table. That’s not necessarily a terrorist,” explains Phillips. “It’s the guys outside of Iraq, the Al Qaeda-type leaders, that you really want to go after.”

Phillips brought those hard-won experiences to the campus of Norwich University last week when he presented his final paper for a master’s degree in diplomacy. He was one of 162 students who received that degree from the school’s online graduate program, and one of 41 whose course work focused on international terrorism. As they presented their work, the students had an opportunity not only to meet face to face but to gain a broader perspective on possible applications of their work in fields such as law enforcement, emergency planning, policy making, diplomacy and journalism.

Created in 1997 in partnership with the U.S. Naval War College in Newport, R.I., Norwich’s online diplomacy master’s program entails 18 months of course work, including a weeklong residency on the Northfield campus. For last week’s residency requirement, students and instructors traveled to Vermont from all over the world, where most are already employed in related careers. Phillips, for instance, began his online studies during his second military deployment.

Their instructor on international terrorism was Dr. James Miskel, a consultant on defense policy and homeland security from Newport, R.I. Miskel, 64, is a former professor and associate dean of academics at the U.S. Naval War College who served on the National Security Council during the Reagan and Bush I administrations. In the early 1990s he was a senior official at the Federal Emergency Management Agency.

The international terrorism concentration entails three semesters of course work. One is devoted entirely to state-sponsored terrorism, something Miskel describes as “a declining art form”; another addresses the motives, methods and psychology of nonstate actors, such as Al Qaeda, and their relationships to the proliferation of weapons of mass destruction and organized crime. Each seminar includes detailed case studies for comparative analyses. For example, students have looked at the agendas, ideologies and strategies of such groups as the Tamil Tigers, Hezbollah, Hamas and Abu Sayyaf.

Although the seminar and student presentations weren’t opened to the press, Miskel and several of his students agreed to talk afterward about the program and its applicability to their day-to-day work. During our interview, Miskel notes that, while the media toss around the word “terrorism” every day, it actually has no universally accepted definition. Interpretations of the word can vary widely, especially since one country’s “terrorist” may be another’s “freedom fighter.” Such disagreements aren’t mere semantic squabbles, since, as Miskel explains, the counterterrorist policies and methods used against nation-states aren’t necessarily effective against nonstate actors.

For this reason, Miskel begins his class by defining terrorism and how it differs from other forms of violence, such as conventional and guerilla warfare, insurgency, personal vengeance and organized crime. In its simplest form, Miskel defines it as “violence against innocent civilians or noncombatants, by a nonstate group, that is done for a political purpose ... achieved through the creation of fear.”

All too often, he says, the public and press confuse “terrorism” with “insurgency.” A roadside bomb aimed at a military target is insurgency. A bombing of an abortion clinic in an effort to end legalized abortion is terrorism. A Hells Angels killing of a rival drug gang member over disputed turf is organized crime. All three constitute violent acts. The difference, Miskel emphasizes, is one of motivation: Is the individual driven by political, ideological, financial or personal motives?

Unsurprisingly, Miskel sees Al Qaeda and its associated movements within radical Islam as the biggest terrorist threat to the United States and its allies. While such groups have a lot in common with other terrorist organizations, he says, the radical Islamic movement has some unique characteristics — notably its expansive goal of imposing Sharia, or Islamic sacred law, in all the lands it controls. As Miskel puts it, “I don’t think the Catholics in Northern Ireland ever thought of [their cause] as a religious crusade that would take over the United Kingdom.”

Based on Miskel’s experience advising presidents, generals and other senior policy officials on defense policy and arms control, one would assume he has come up with a checklist for gauging the success of counterterrorism efforts. He hasn’t.

As he puts it, there’s “no PowerPoint slide or list of five bullet points” with which to measure success. While Miskel points to several useful indicators — including the numbers of enemy combatants captured, training camps and safe havens raided, and illegal funds intercepted — such metrics don’t necessarily tell the whole story.

“The fact that you don’t have an attack in a given year doesn’t necessarily mean that your counterterrorism [efforts] were successful,” he says. “It could just mean that the terrorists got sick that day or decided to attack Spain instead of the United States.”

Fulton, whose EU contract is due to expire soon, speaks to this reporter with surprising bluntness about the government of the country where he serves.

“The major political parties in Kosovo are all the biggest mafia clans. [Prime Minister] Hashim Thaçi is a former terrorist,” Fulton says. “It’s all heroin trafficking and human trafficking. The government is the organized crime. There’s no two ways about it.”

The biggest emerging threat in Kosovo right now, Fulton asserts, is religious fundamentalism. He recounts how radical clerics have been flowing in from Saudi Arabia and paying young Muslims 300 euros a month to grow long beards and wear traditional Islamic garb. That’s enough money to support the average Kosovar family.

Why should Americans care about such developments? Fulton’s classmate, Kyle King, is a former U.S. Marine who spent two and a half years in Afghanistan. He now works as a civilian contractor for NATO in Kosovo doing civil protection and disaster planning. King, 36, points out that the goal of the radical clerics is to “normalize” the presence of fundamentalist Islam in Kosovo and create the impression that it has established a permanent foothold in the Balkans.

“You’re not going to have major Al Qaeda cells operating in Kosovo. But that’s not the point,” King says. “The point is, a weakened government will facilitate terrorist organizations to transit through ... gain forged documents, passports, etc., and move into Europe.”

“The borders are very porous,” Fulton adds. “We’re constantly finding Afghans without documents in Kosovo ... They may be guys who are poor and trying to make a decent life for themselves. Or sometimes they have ulterior motives. But it’s definitely alarming.”

Fulton and King agree that the international terrorism program at Norwich gave them a much more comprehensive understanding of how terrorist groups think, organize and recruit. For example, while many people assume poverty is a “cause” of terrorism, these students characterize it more as a contributing factor and a tool that terrorist groups use to manipulate the local populace. In fact, Miskel points out that many terrorist leaders are wealthy, or at least middle class, and were educated at colleges and universities in the West.

“Especially with the history of ethnic conflict in the Balkans region, you have to look at the underlying sources of terrorism, and why people are doing what they’re doing,” King says.

For his part, Phillips says the lessons he’s learned from the Norwich program will be immediately applicable when he returns to Iraq this fall for his third tour of duty.

“The biggest thing it’s done for me, being a company commander, is given me a better understanding of who my enemy is, their motivations and what drives them,” he says. “It’s been an eye-opening experience.”