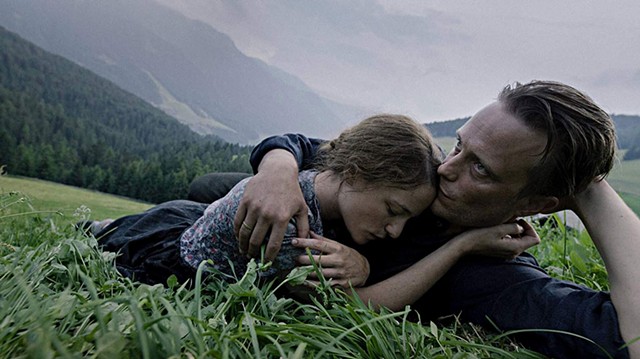 Early in Terrence Malick's A Hidden Life, an Austrian farmer named Franz Jägerstätter (August Diehl) chats with a painter busy decorating a church with scenes from scripture. The artist laments that he must offer the faithful a "comfortable Christ" because he can't capture the more unsettling qualities that he intuits in Jesus' sacrifice. "How can I show what I haven't lived?" he asks, distilling the lament of all creators who aim to make compelling art out of the lives of others.

It's one of many scenes that serve no apparent plot or expository function in the 174-minute film, and it's hard not to see it as a meta comment on the task that Malick has set himself.

Ostensibly, A Hidden Life is a fact-based drama about Jägerstätter's refusal to swear an oath to Adolf Hitler and perform his compulsory military service in World War II, which led to his execution in 1943 and his beatification by the Catholic Church in 2007. It sounds like prime Oscar bait, but Malick chose a less "comfortable" path. Where he could have drawn the obvious parallels between Jägerstätter and Jesus and called it a day, he seems determined to understand this conscientious objector's "hidden life" (a phrase from George Eliot's Middlemarch) from the inside out.

That means understanding the mountain farm where Franz and his wife, Fani (Valerie Pachner), toil day in and day out, haying and plowing and weaving and tending to their three daughters. If Malick constructs his films like musical compositions, here the farm is his leitmotif. Even after Franz is hauled off to prison in Berlin, the movie keeps returning to Fani as she doggedly maintains their home in his absence.

If you're wondering whether this means there are scenes of windblown wheat, why yes, there are. All the Malick tics are on full display in A Hidden Life, from whispery voice-over to an obsession with foliage. Fluid Steadicam shots give us a sense of floating godlike through a landscape of purple mountains and ravishing greenswards.

And yet, tic or not, Malick's intense dedication to the natural setting feels right, because Franz's refusal to pronounce his Nazi oath has the simplicity and immovability of a glacial boulder. It's just there, an intuitive certainty that swearing an oath to an evil leader is, well, evil.

Viewers may wonder whether Jägerstätter's symbolic resistance actually mattered. Over and over, the authorities warn Franz that his defiance will die with him, serving as an example to no one. They were right, at least until 1964, when American sociologist Gordon Zahn unearthed and publicized Jägerstätter's story.

Malick could easily have beatified Jägerstätter the way the church eventually did, giving him a martyr's halo. Instead, he presents him as a slight, spectral, almost Kafkaesque figure, lost in the machine of a bureaucracy that's often rendered with jarring handheld camerawork. Both Diehl and Pachner embody transcendent ordinariness with such skill that they overcome the screenplay's intermittent heavy-handedness. Because we believe in their commitment to the land and each other, we believe in the moral commitment that ultimately severs them.

A Hidden Life is too impressionistic to tell us much about why some people resist facism and others don't. But the film does capture an all-too-current fear about individual acts of resistance: Do they add up? Do they matter? Perhaps that doubt is the unsettling quality that depictions of a "comfortable Christ" leave out. By leaving it in, Malick creates a rapturous, devastating film about the price of conscience.