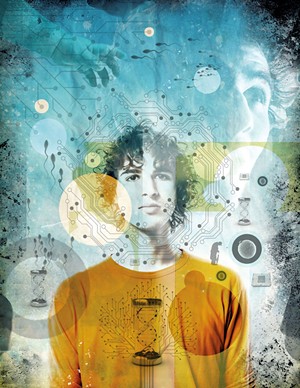 How would you tell the story of who you are to your family, friends, future generations, even alien life-forms? What are the crucial influences and experiences that make you unique? Assuming you could even identify the disparate elements that came together to make you distinctly you, would you be willing to compile and preserve them in a computer so that, at some unknown time in the future, your conscious "self" could be re-created either in biological or synthetic form?

Bruce Duncan has been pondering such existential questions for more than a decade. In fact, as the managing director and sole employee of the Lincoln-based nonprofit Terasem Movement Foundation, he's been operating under the assumption that such technologies are not only theoretically possible but inevitable. And he's literally banking people's "identities" so that TMF can eventually make that future happen.

Now, Duncan is looking for help from Vermont's artists and other creative minds to establish an "explanatorium," or showcase, that illustrates Terasem's mission. And the more imaginative it can be, the better.

In 2006, TMF launched an online "mind-uploading" experiment called LifeNaut.com. Through this internet platform, TMF has been gathering and storing biographical information — photos, videos, music, art, writings, voice samples and other personal ephemera — submitted by more than 45,000 people around the world.

Anyone with an internet connection can visit the website and create a free "mindfile." The site also has the ability to generate a photo-based avatar of the user that can "speak" and "learn" from interactive conversations with him or her. TMF then stores and backs up all those personal data, at no charge, on servers and other media formats at locations around the world. People are free to keep their mindfiles private, make them visible to a select network of friends and family or share them with the world.

And galaxy. As Duncan points out, LifeNaut users can even choose to "space-cast" their mindfiles, via radio telescopes, out into the universe. Though the signals from Earth are weak and spray like a lawn sprinkler in no particular direction, they travel at light speed and reach the closest star system, Alpha Centauri, in about four years.

"The idea there is, if an asteroid wipes out the Earth," Duncan says, "your information will still be out there."

In 2010, TMF launched the second phase of its LifeNaut experiment: It invited people to supplement their mindfiles with DNA samples, or "biofiles." For a one-time fee of $99, LifeNaut users receive a bio-collection kit for gathering cells from the inside of the cheek. The genetic material is then mailed back to TMF, where it's stored, in perpetuity, in a tank of liquid nitrogen at minus 190 degrees Celsius.

Ultimately, the goal is to create an "analog" of a human being that combines a mindfile with future consciousness software, or "mindware." Theoretically, that digital composite could then be downloaded into a biological or nanotech body created from the biofile DNA, thus becoming as "alive" and "conscious" as any birthed human. A century or more from now, Duncan suggests, your descendants might sit down and talk with a virtual you about what it was like to live in the early 21st century.

While TMF's mission may sound implausibly ambitious, it's worth keeping in mind who conceived it. TMF is the brainchild of Martine Rothblatt, the lawyer, author, entrepreneur and futurist behind GeoStar and Sirius radio, as well as the medical biotechnology company United Therapeutics. As Rothblatt is reportedly the highest-paid female CEO in the country, the foundation is amply self-funded.

In collaboration with Hanson Robotics, Rothblatt created one of the world's first and most advanced cybernetic companions: Bina48. Named for Rothblatt's wife, Bina48 was designed to test the feasibility of transferring human consciousness to a biological or technological body. Writers Megan James and Sarah Williamson, who interviewed Bina48 for an October 16, 2013, cover story in Seven Days, wrote that interviewing her "felt like communicating with another species, or glimpsing the future."

Today, Bina48's limbless bust sits on a platform beside a desktop computer in TMF's 100 percent solar- and geothermal-powered facility. There, in a homey office above a three-car garage overlooking the western slope of the Green Mountains, it's easy to envision how futurist Ray Kurzweil's prediction of the "Singularity" — the point where human and artificial intelligence become so intertwined as to be indistinguishable — might eventually become reality.

For some, TMF's futuristic vision of techno-immortality may conjure up thrilling mental images of Data, the benign and inquisitive android from the TV series "Star Trek: The Next Generation." For others, James Cameron's The Terminator and its homicidal cyborg instantly leap to mind.

Duncan readily understands the latter group's fears about the future, and present, uses of all that data. But, he emphasizes, TMF has no interest in data-mining LifeNaut's users, selling them robots or cloning humans — the last of which, as he points out, is both unethical and illegal. Rather, his foundation is trying to answer more fundamental questions: What exactly does it mean to be human? What role will technology play in humanity's next great evolutionary leap?

Other research endeavors have focused on understanding how each component of the human brain functions; the BigBrain project, for instance, is creating a 3D digital atlas of the brain. LifeNaut, Duncan says, is more interested in the information the brain stores specifically to create the mind and the self. He envisions various methods that might be used for extracting and curating those data: video motion capture, voice-recognition software, online surveys and psychological tests. Other details about individual identity and beliefs, he adds, may be gleaned from the cultural products we feed our minds, such as movies, books, art and music.

"All these different constellations are expressions of your consciousness," Duncan explains. "If it can be digitized or saved in some form, we're trying to create that space" where consciousness could be preserved indefinitely.

While these cutting-edge technologies may inspire predictions of both good and ill, Duncan says people from around the world are clamoring to learn more about TMF and its mission, values and projects. Many, including international journalists and documentary filmmakers, travel to Vermont to get a closer look at what the foundation is doing, and he no longer has time to sit down with them all.

In response, TMF and its founders and benefactors — Martine and Bina Rothblatt — have set aside an empty 10-by-25-foot space at the foundation's Lincoln headquarters to showcase their mission. Recently, Duncan put out a call to Vermont's artists and other creative thinkers to help him fill that space with an "explanatorium" that would teach people about the foundation's history, goals and ethics. Participants will receive public credit for their work, but not compensation.

"I've always found that better things come out of collaboration and synergy," Duncan explains. "Vermont is just teeming with really creative people who I think are comfortable with being free thinkers. And this is definitely an area that requires free thinking about the future."

Initially, Duncan says, the explanatorium will focus on three components of TMF's work: the mind-uploading LifeNaut project, Bina48 and how she came to be, and the biofile project. Though Duncan doesn't envision the explanatorium as a public museum, he says it could eventually become a mobile exhibit he or the Rothblatts use when they're on tour with Bina48 or their other projects.

Why solicit the input of local creatives for such an endeavor? Artists, Duncan suggests, "are the cultural detectives for the truth that's not yet emerged.

"Poets, writers and artists are comfortable with exploring something that seems ambiguous and true at the same time," he adds. "And that's where we're at."

Duncan wants visitors to walk away from the explanatorium with a greater understanding of the social and moral implications of mind-uploading technology — and less fear about it.

"This is a very human endeavor, and it's been going on from day one," he says, "where people have tried to preserve and pass on something that seems very personal and important to them about their life and their unique experiences."

Pink Floyd once summed up a life with the lyrics of "Breathe": "For long you live and high you fly, / and smiles you'll give and tears you'll cry, / and all you touch and all you see, / is all your life will ever be." But the folks at TMF believe that your life could be something more: just the first of many future iterations of you.

The original print version of this article was headlined "Mind Matters"