No more excavators and backhoes, no more chain-link fencing: After nearly a decade of planning and more than a year of construction, City Hall Park is once again open to Burlington residents, tourists, shoppers and downtown workers. To celebrate, the city held a two-day grand opening on Friday and Saturday, October 16 and 17. More than 1,000 masked and appropriately distanced fans of the 150-year-old park attended.

In an email to Burlington residents afterward, Mayor Miro Weinberger wrote: "On this opening weekend, we achieved the central goal of renovating City Hall Park: to give it more life. In recent decades, the park was dramatically underused much of the time. The renovated park includes many features designed to change that."

Not all of its merits are immediately apparent. As landscape architect Jeffrey Hodgson pointed out, "There's a lot more going on in the park than meets the eye." His firm, Wagner Hodgson, designed the park, working from concepts suggested by the public and refined over years of discussions with residents, city councilors and historic preservation experts.

If you haven't been part of that process, you might not be familiar with some of the park's main selling points. So here's a list of 10 things to love about it, from the artfully rendered stormwater treatment system to Vermont's only accessible public fountain. Read this, then visit the park in person and see it for yourself.

Unlike Central Park or Shelburne Farms, City Hall Park has always served as a multiuse civic square, with paved paths leading to and from a central hub. Pre-renovation, the paths were surrounded by scrubby, hard-packed dirt on all sides. The new design preserves a hub-and-spoke configuration but also creates four large, newly planted lawns that invite lounging.

Yes, construction crews cut down trees to renovate City Hall Park. But Burlington city arborist VJ Comai and his team have replaced them with new ones. The species are all native to the U.S. and "help diversify the age class of the species in the park" he said. Comai warned that older trees are more vulnerable to damage from weather events such as ice storms. He chose a wide variety, too, to mitigate threats from diseases or pests. "Diversity is key," he said.

Grass and trees were the only vegetation in the old park. The new one is now home to 400 shrubs locally sourced from Riverwalk Farm, a wholesale grower in Charlotte, and 3,400 perennials and grasses. Most of the latter are native to Vermont, and all were purchased from wholesale grower Fairfax Perennial Farm. Comai selected the vendors and is proud that the city was able to "keep our money local," particularly during the coronavirus pandemic this spring.

Planting decisions were made in line with Burlington's status as a "Bee City" that's dedicated to supporting pollinators threatened by loss of habitat. Comai has witnessed the benefits firsthand. In the summer, he said, "There were butterflies and bees in there like I haven't seen in a long time. The park really came alive ecologically." At the end of October, black-eyed Susans and daisies are still in bloom.

Watch for more color in the spring — Comai and his team are planting 500 daffodil bulbs and 300 allium bulbs that will bloom in May. A variety of hydrangeas will also return year after year. 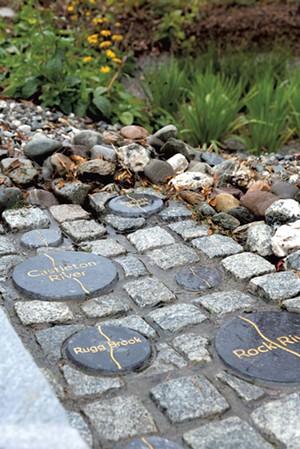 All those new plants aren't just pretty, said Comai, "they're helping to absorb and filter stormwater." The new park captures precipitation in three rain gardens and filters it before it can end up in Lake Champlain. New permeable pavers have also increased the amount of soil that can absorb water. During rainstorms, drainage systems and cobblestone runnels alongside paved paths channel water toward the rain gardens.

An art installation is embedded in the cobblestone runnel that leads to a rain garden at the corner of Main and St. Paul streets. Mixed in with the stones are 120 flat, smooth Champlain marble disks. Meant to represent raindrops, they're imprinted with the names of tributaries in the Lake Champlain watershed — a subtle reminder that the park is part of a larger ecosystem and that park goers' actions affect water quality.

Artists Kat Clear and Tessa O'Brien worked closely with the design team and contractors to plan and execute the installation. The artists were inspired by the Japanese art form of kintsugi, in which broken pottery is mended with seams of metal-based powders, revitalizing it into something new and even more beautiful than the original.

"More public art is yet to come," noted Burlington City Arts executive director Doreen Kraft, including a vertical element near the center of the park. The adjacent BCA Center also has a new entrance and a patio where it can host events.

Want to sit and enjoy a cup of coffee with a friend? Grab a chair. Colorful, lightweight folding chairs and tables are available for use free of charge. City staff collect and secure them at the end of the night. This has become a common feature in urban spaces that encourages passersby to stop and relax for a while, Hodgson said. "People don't realize there's furniture in Times Square," he said. "It's out 24 hours a day."

The brand-new, gender-neutral restroom in City Hall Park provides essential relief at a time when such facilities are in scant supply downtown. The Portland Loo unit was designed a decade ago by a fabrication company working with the city of Portland, Ore. It's now found in cities across the continent, including Boston, Miami, Seattle, Vancouver and San Antonio. Why? Because it's durable, accessible and solar-powered, and has a graffiti-proof surface and grating that ensures privacy while allowing people on the outside to see whether it's occupied. And it doesn't take up much space.

The restroom depends on the park's new below-ground infrastructure. The electrical, plumbing and tent-anchor upgrades will make it possible to add a future food-service kiosk and food carts, as well as pop-up stages and markets. No longer will organizers rely on power run through extension cords from city hall. Basically, Hodgson said, wherever there's pavement, there's accessibility to electrical power. "All these little things add up," he said. "They just make Parks and Rec and BCA's life a lot easier." 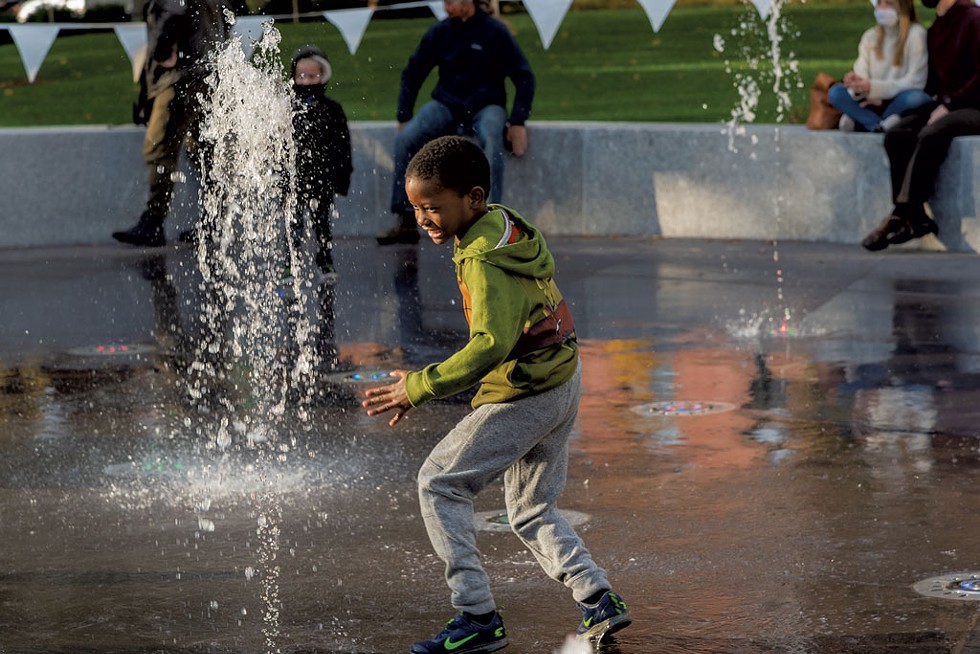 The fountain at the center of the old park was one of its defining features — though not an original one. It was actually a horse trough at the Battery Park extension at Battery and College streets before being moved to City Hall Park. The new fountain consists of four rows of LED-lit jets that shoot up from the ground. Its designer, Delta Fountains, has created and installed systems all over the country, including at the Metropolitan Museum of Art and the 9/11 Memorial & Museum in New York City.

Landscape architect Keith Wagner described the park's new fountain as "the polar opposite" of the one it replaced. It's more advanced: The jets and the LED lights can be programmed to sync with music, and can auto-adjust to changing weather conditions including wind. The water, which is treated with chlorine, runs through a UV filtration system. If that breaks down, the water shuts off and a text alert is sent to the city staff charged with monitoring it.

But Wagner noted that the new fountain, though complex, is also simpler to maintain. There's no scummy, untreated standing water, no basin with steps that chip during winter snow removal. When the new fountain shuts off for the winter, the space becomes a plaza suitable for other uses.

Burlington mom Annie Bourdon is excited about the new fountain because both of her 7-year-old twins — Posey and her brother, Otis — will be able to enjoy it. Otis has cerebral palsy and gets around using a wheelchair. Now Bourdon and her husband will be able to wheel him right up to the fountain jets. He'll be able to put his hand in without having to be lifted out of his chair. "I just think it's delightful," she said, noting that this is the only fountain of its kind in the state.

Bourdon watched the park take shape from her office on St. Paul Street — she's the executive director of CarShare Vermont. She offered her input during the planning process and applauded the designers for widening the paved pathways, making them easier to navigate with a wheelchair or a stroller. Bourdon also pointed out that the paths aren't as steep as they used to be; the designers were able to modify the grade in most of the park. Even a slight slope "makes a huge difference" to someone propelling their own wheelchair or using a walker, she said.

BCA director Kraft agrees that accessibility is vital in this civic space: "We want people to feel that this is everyone's park," she said.