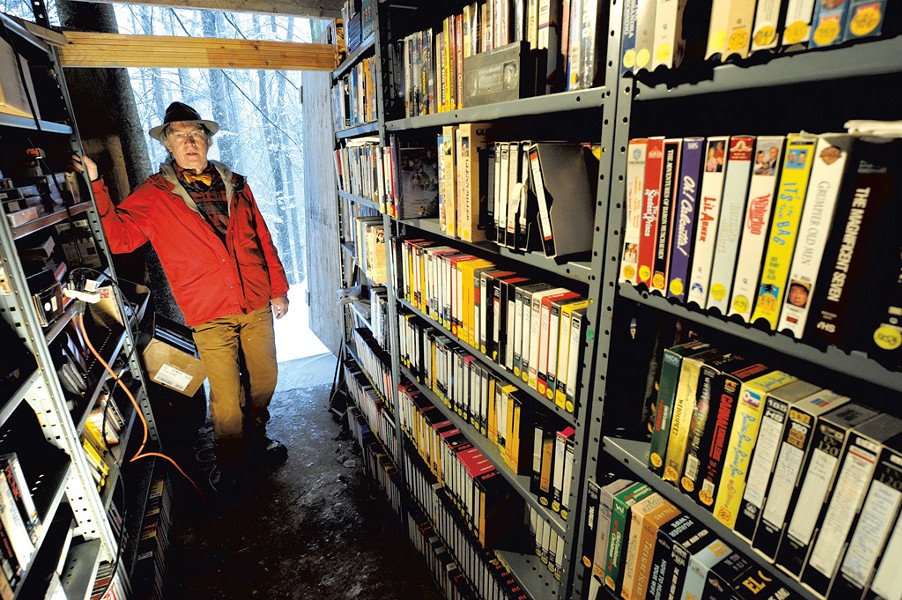 In the era of abandoned movie-rental storefronts, Rick Rayfield has made a bold move. The Fayston resident and former neuroscience professor has managed the Tempest Book Shop in Waitsfield since 1986. In recent years, he's been buying up lots of movies — both on VHS tapes and DVDs. Now, a solid portion of Tempest is home to more than 4,800 titles to rent the old-fashioned way.

During Seven Days' visit, Rayfield appeared to be doing a healthy business — in less than an hour, three customers returned movies and rented new ones. On a Tuesday afternoon.

Jenniflower Laker of Warren returned her borrowed copies of Pineapple Express and one of the Lord of the Rings trilogy. She's been renting movies from Rayfield since moving to the area from Burlington three years ago. "Rick was my first friend," Laker said. "It's so nice to have somebody to talk to about movies."

"Coming here," she continued, "there's that old-school feeling of being able to look ... pulling out the box to read, holding it in your hand. I like that stuff." Laker reminisced with her companion about two now-defunct Burlington video-rental spots: Marco's and Waterfront Video.

Rayfield said he began offering movie rentals in 2013. Currently, a rental is $2 per movie for three days. Or, customers can buy a frequent-user card and get 13 movies for $20 — a baker's dozen, Rayfield said. And he doesn't charge late fees.

"A quarter of the business used to be music," he said. "Mostly CDs. It died overnight." Building from his own collection of roughly 300 films, Rayfield then began to offer titles at the shop. He started hunting for movies online. When Montpelier's Downstairs Video went out of business in 2015, he purchased the closeout inventory.

"[I was] desperate to keep the store alive," Rayfield said, "as a business, and as a place for the community to buy cards and maps and listen to me talk."

Rayfield's collection of titles is pretty impressive for a small shopkeeper. By comparison, a 2016 AllFlicks report claimed that streaming giant Netflix had approximately 6,500 titles available for streaming.

But who has a VCR anymore, anyway? Part of Rayfield's business plan has been to convert his mountain of VHS tapes — which he stores in a barn on his property — to DVD format, using his "little black box." At his most efficient, he said, he can transfer three movies a day. He also offers this service to customers, along with converting LPs and cassettes to CD, through his sideline Romeo Romeo Audio Video.

Is this legal? Rayfield is confident that it is. In the store, he has taped a piece of paper that says, "Arghh ... Pirates, are we?" It delineates seven pointers/explanations about the legality of his trade. "The Federal courts said we have the right to make an archival tape," Rayfield explained, "[but] you can't own it forever if you own it on VHS."

Casey Rae, former Seven Days music editor and the author of the forthcoming Music Copyright in Practice: An Authoritative Guide, writes in an email that the primary "issue is reproduction and format shifting, which is ... considered 'fair' for private uses. But here, the reproduction is for commercial exploitation of the reproduced works (assuming the works are still under copyright). This is where the liability would be, though it is difficult to imagine motion picture studios seeking damages."

Either way, a visit to Tempest makes it clear very quickly that what Rayfield is offering is not "just" movies, or even movies and books. It's the experience. Sporting a loosened polka-dotted bowtie, Rayfield looks every bit the quirky shopkeeper. On Saturdays, he sells homemade bread. Lionel trains circle the interior of the store. He even can replace your watch batteries. In a way, it's all the stuff of movies.

Correction, April 7, 2017: An earlier version of this story did not specify that Netflix's 6,500 titles, as estimated in an 2016 AllFlicks report, are specifically streaming titles.