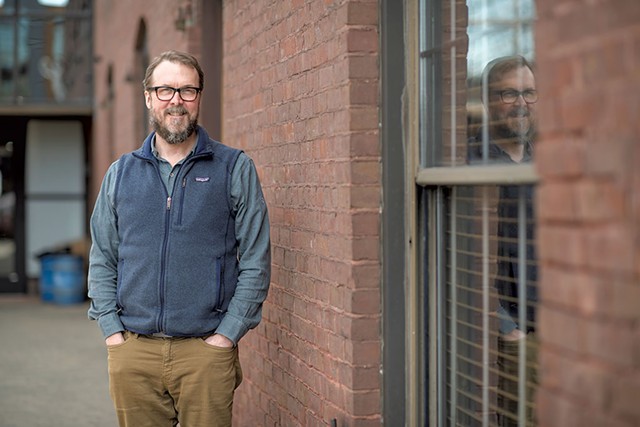 Last year, a woman in her twenties sought treatment at the Northeastern Vermont Regional Hospital because acute depression had driven her to consider suicide.

The 25-bed St. Johnsbury hospital doesn't have its own clinical psychiatrist, let alone an entire unit dedicated to treating patients in mental health crisis. Once the woman was admitted to the emergency room, staff members set out to find an open bed at one of Vermont's few inpatient psych facilities.

The same scenario has played out at rural hospitals for years and typically ends one of two ways: The hospital gets lucky and finds an opening immediately. Or, more often, the patient lands on a waiting list and goes days or even weeks without receiving treatment from an expert.

"We're holding patients for longer than we ever have." Dr. Ryan Sexton tweet this

But in this case, there was a third option. Northeastern's ER staff contacted Dr. Mark McGee, a psychiatrist who runs the Burlington-based telemedicine company Alpine Telehealth, and arranged a virtual visit. After evaluating the woman from 75 miles away, McGee helped physicians on the ground with some "complex" medication management, which included modifying the doses of her existing antidepressants and starting her on a new one, recalled Dr. Ryan Sexton, director of the Northeastern ER.

"While we were holding her in the emergency department for a period of days, she had notable improvement in her depression," Sexton said. The patient eventually was no longer suicidal, did not require inpatient treatment and was discharged.

The vast holes in Vermont's mental health system have turned hospitals into de facto boardinghouses for psychiatric patients — to the detriment of everyone involved. People suffering mental health crises find themselves trapped in a chaotic ER environment that can worsen their condition. And frontline workers scramble to care for a group of patients they're not properly trained to treat in-depth.

"We are holding patients for longer than we ever have," Sexton said.

As emergency departments look for better ways to get patients the mental health crisis services they desperately need, some are turning to telemedicine. Dartmouth-Hitchcock medical center, which launched a virtual ER psych service five years ago, now contracts with a dozen hospitals, including four in Vermont: Mt. Ascutney Hospital and Health Center in Windsor, North Country Hospital in Newport, Southwestern Vermont Medical Center in Bennington, and Brattleboro Memorial Hospital. Two other Vermont hospitals — Northeastern and Gifford Medical Center in Randolph — partner with McGee at Alpine Telehealth.

The approach could one day become standard: A recent health care workforce development plan recommended that Vermont consider a statewide telepsych program similar to one in North Carolina.

"There's an increasing awareness that psychiatric care is an important part of overall community health and well-being," McGee said. "Thankfully, health systems are beginning to put some vitally needed resources into some of those supports."

The phenomenon of psychiatric patients stacking up in emergency rooms can be traced to the closure of the Vermont State Hospital in Waterbury, which was destroyed by floodwaters during Tropical Storm Irene in 2011.

Officials sought to rebuild the state's mental health system with less emphasis on inpatient treatment beds and more on community-based care. But the transition coincided with an increased demand for mental health services, both nationally and in Vermont: The University of Vermont Medical Center's emergency department, for example, treated 1,300 more mental health patients in 2019 than it did in 2010. And the agencies designated to provide this community-based care say chronic underfunding has made it impossible for them to keep pace with the need.

The pandemic has only widened the gaps. Mental health agencies reported an alarming 30 percent turnover among their staff last year, with one in every five positions now vacant. Similar shortages at inpatient facilities have taken dozens of Vermont's 200 adult psychiatric beds offline the last two years.

The Vermont Association of Hospitals and Health Systems tracks the number of patients stuck in emergency departments across the state through twice-weekly surveys. Data from one day earlier this month showed that three dozen people were awaiting beds at inpatient psychiatric facilities, with an average wait time of six days.

Dr. Ramsey Herrington, the director of emergency medicine at the UVM Medical Center, testified at a legislative hearing in December that nearly half of the Burlington hospital's 44 ER beds are filled on any given day with psychiatric patients awaiting inpatient placements. Because of this, Herrington said, "the volume of our patients without access to emergency care has expanded dramatically, and our citizens with acute physical health care crises have seen an exponential rise in their waiting room times."

McGee, of Alpine Telehealth, saw these trends take form during a six-year stint at the Brattleboro Retreat, a psychiatric hospital in southern Vermont that has doubled in size since the closure of the state hospital.

As a staff psychiatrist and, later, chief medical officer at the Retreat, McGee saw firsthand how difficult it was to attract new doctors to Vermont. So he became interested in telemedicine, hoping that it would help the hospital overcome its recruitment struggles. He eventually established a virtual psychiatry program, which allowed him to hire five full-time providers from outside the Brattleboro area in the first months.

McGee left the Retreat in 2018 to start Alpine Telehealth with the goal of expanding access to psychiatric care in underserved communities. In addition to his hospital clients, he also works with several developmental service organizations, the mental health agency in Lamoille County and Landmark College in Putney. He has also expanded his work at Northeastern to include the hospital's adult primary care and pediatric clinics, with the hope of intervening earlier to help patients who need mental health support.

McGee initially performed all the clinical work himself, but demand for his services has rapidly increased. He recently hired a part-time psychiatric nurse practitioner and expects to bring on another two in coming months. He thinks that he may have to expand again within the next year, too, as more organizations seek to use his service.

Patients at Vermont's smaller, critical access hospitals have the most to gain from telepsychiatric services, since, unlike the UVM Medical Center, rural providers typically don't employ psychiatrists who can make rounds in the ER each day.

"Emergency physicians are very good at stabilizing patients," said Sexton, the ER chief at Northeastern. "But when we have to make complex psychiatric medication changes and treatment for a prolonged period of time, there's a definite benefit of having a psychiatrist available to us."

Quickly treating patients in mental health crises can have a major impact on both their immediate state of mind and their recoveries, McGee said. The doctor recalled one specific case in which a patient with severe depression waited nearly a week in an emergency room before he could get access to a bed at the Retreat. After just a few days of aggressive treatment, the patient was discharged, McGee said.

"If that same treatment were made available to him at the time he initially presented, he may never have needed an inpatient level of care," McGee said. "He would have been able to return home sooner. He would have returned to work sooner. And so that whole outcome really could have changed fairly dramatically."

The vast holes in Vermont's mental health system have turned hospitals into de facto boardinghouses for psychiatric patients — to the detriment of everyone involved. tweet this

Researchers have found similar benefits from North Carolina's statewide telepsych program, which began in 2013 and now includes more than 50 hospitals. A 2020 study comparing hospitals in and out of the program found that those with telepsych services managed to send more patients home and transfer fewer patients to psychiatric facilities.

Psychiatry isn't the only area in which Vermont hospitals have been expanding telemedicine. Many doctors performed routine checkups remotely during the pandemic, and some patients — especially those in rural areas who live far from their providers — say they now prefer virtual visits over in-person ones.

Some hospitals have even considered turning to telemedicine for emergency situations. The UVM Health Network offers a Tele-ED program that connects doctors at the group's smaller hospitals with specialists in Burlington to help diagnose and care for patients with medical emergencies. It's also working to expand a similar program for stroke patients. Hospitals outside the network, meanwhile, have joined an experimental national program designed to help rural providers better manage critical cases for longer periods of time.

The program — known as the National Emergency Tele-Critical Care Network — was launched during the pandemic and is based on a platform the U.S. military uses in war zones.

Doctors and nurses can seek guidance from outside specialists using a smartphone app that supports audio and video calls and allows photos and documents to be shared securely. A hospital in Guam used the service more than 60 times during a massive COVID-19 surge in the fall of 2020, treating a wide range of ailments that included a dozen heart attacks.

As the Omicron wave swept across the state last fall, leading the region's largest medical centers to sharply limit patient transfers, several Vermont hospitals signed up for the free service.

"The idea was to provide some help to busy staff so that they had one more resource if conditions called for that extra pair of virtual hands," said Jeff Tieman, president and CEO of the Vermont Association of Hospitals and Health Systems.

Only one Vermont hospital ended up using the service, and only on a single case, Tieman said. And with the sudden drop in COVID-19 cases, most hospitals are back on more solid footing — for now. Still, the application's uses extend beyond the pandemic, Tieman said, with the program offering help during other disasters, such as hurricanes and earthquakes.

There are, of course, skeptics, including some within Vermont's medical community. Sexton, the Northeastern emergency room doctor, questions the usefulness of remote trauma services, since they still require on-the-ground providers who can perform any necessary procedures. And while he has seen telemedicine help some psychiatric patients stuck in his ER, even that can feel akin to treating the symptoms of the problem rather than its root cause.

"I'm hesitant to paint it as the panacea, because it's not," he said of telepsychiatry. "The emergency department is not a place for [prolonged] psychiatric treatment. We're forced into that situation right now only because the other resources are lacking."

McGee, of Alpine Telehealth, agrees that long-term fixes to the mental health system will require a far more concentrated effort, from investing in local agencies to bolstering inpatient offerings. But he said telemedicine can still play a "vital role" in getting psychiatric patients the services they need, both now and in the future.

"The reality about telemedicine is that it's infinitely portable, so if somebody needs that level of care, you can deliver it to wherever they are," he said. "It's the right care at the right time in the right place at the right amount."

The original print version of this article was headlined "Screen Time"