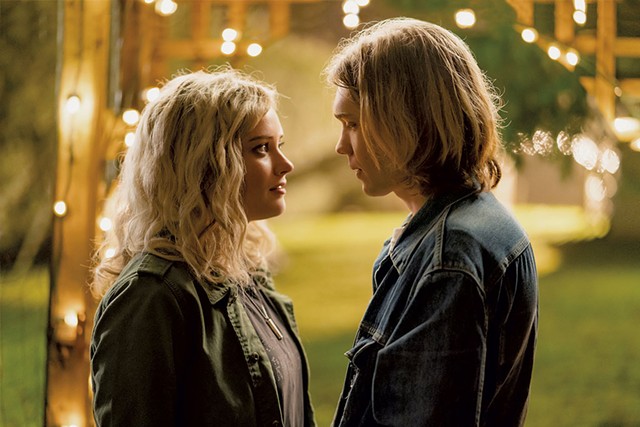 Our streaming entertainment options are overwhelming — and not always easy to sort through. We talk a lot about the intense pressures on today's teenagers. But what if they started literally exploding? That's the premise of Spontaneous, a horror comedy based on the 2016 young-adult novel of the same name by Vermont author Aaron Starmer. One of the many 2020 films whose theatrical release was curtailed by the pandemic, it's watchable with a subscription to Hulu, Amazon Prime Video, Sling TV or Philo, and rentable elsewhere.

Mara Carlyle (Katherine Langford) isn't excited about her senior year of high school. Prone to dark attire, smoking weed and making sarcastic remarks, she's more the type to doze through pre-calc class. Until, one day in said class, a fellow student explodes — bloodily and everywhere, like a flesh balloon, as Mara notes in her deadpan voice-over.

This abrupt and horrifying demise will not be the last in Mara's class. As more Covington High seniors explode — some individually, some in clusters — the feds are called in, and people begin to speak of the "Covington curse."

Against this dark backdrop, Mara embarks on a carpe diem romance with Dylan (Charlie Plummer), a movie nerd who won her heart when he compared the scene of the initial explosion to the films of David Cronenberg. It's quite a meet-cute — but can their relationship survive the curse?

As someone who's seen nearly every dark or quirky American high school comedy made since the 1980s, I didn't expect anything fresh from Spontaneous. I was pleasantly surprised.

The movie has elements that could easily have made it a hard watch. Mara's smart-ass commentary has the potential to get tiresome, while her sweet and potentially doomed romance with Dylan recalls all those cloying The Fault in Our Stars copycat films of the past several years. And yet, in the hands of director-screenwriter Brian Duffield (who wrote the meta comedy The Babysitter), all these ingredients gel into a surprisingly tart and fun concoction.

The film's central theme doesn't exactly sneak up on us: The horrific spontaneous deaths of Mara's classmates inspire her to be more .... spontaneous. It's the timeworn classic "Gather ye rosebuds while ye may" tricked out for the 21st century with eyeliner and R-rated blood spatter. But Spontaneous balances its wacky and thoughtful elements with aplomb, steering clear of both the crass and the maudlin.

Langford, who starred in "13 Reasons Why," gives Mara a likably laid-back, sardonic presence, though terror and confusion keep flickering through her too-cool-for-school exterior. While Mara's romance with Dylan is indeed sweet, her friendship with her bestie (Hayley Law) gets nearly equal time; the two of them share a fantasy of being old ladies getting high together.

Viewers who expect an explanation for the adolescent carnage will be disappointed. Everybody in the movie craves reasons, too: While the teens try to trace where the contagion started — if it even is a contagion — the adults fret over them, quarantine them and prescribe a questionable pharmaceutical antidote. Other adults see the exploding kids as enacting some kind of satanic master plot.

The film portrays all these efforts as being on the same level as "thoughts and prayers" rhetoric — mostly well intentioned but ineffectual. The explosions continue to occur with their own inscrutable logic.

It's easy to see a commentary here on the predictable public reaction to school shootings. Viewers could be distracted from that by the scenes involving quarantine tents and hazmat suits, which are bound to play differently now than they did when Spontaneous was made.

The movie's underlying message, however, is timeless rather than topical: Life is frequently absurd and sometimes cruelly absurd, and the best you can do is hold tight and enjoy as much of the ride as you can. Not all of Mara's coping strategies are healthy, but whose are? Coming out of two long pandemic winters, few of us are in a position to judge this kid whose goals have narrowed to "survive graduation."

Heathers (1989; Hulu, AMC+, Sundance Now, Shudder, Pluto, Tubi, rentable): The original movie that exploded the teen-flick genre with its wild and wicked depiction of what happens when snarky misfits go to war on the queen bees.

Detention (2011; rentable): In 2014, I called Joseph Kahn's undeservedly obscure horror comedy "a self-referential high school flick that takes the genre to the limit and drops it off a cliff, then stands and watches gleefully as it explodes into candy-colored smithereens."

Assassination Nation (2018; Hulu, rentable): I had more problems with this ambitious teen flick from director Sam Levinson (Malcolm & Marie), in which a hacker's exposure of a small town's secrets touches off a modern witch hunt. While it fails to deliver on its promise of fiery feminism, it's still a must-watch for fans of this subgenre: Every anxiety of the Trump era is on display.

The original print version of this article was headlined "Spontaneous"