Teens Bond With the Bard at Shakespeare Camp 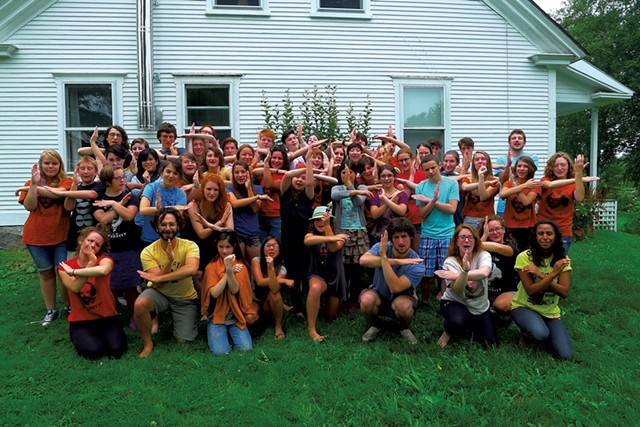 Brattleboro actor and author Peter Gould didn't intend to start a summer camp, but "that's what happened," he said. In 1998, Gould proposed a residency in theater arts for high school students at Craftsbury Academy. But when he encountered resistance from teachers about the time commitment during the school year, he decided to start a summer camp instead. Get Thee to the Funnery — a riff on the famous line from Hamlet — was born.

Every summer since, he has headed up the two-week camp for teenagers, sometimes called Shakespeare camp or, simply, the Funnery. During those weeks, Gould said, "People get together, they hang out and talk. They really love each other and make lifelong friendships — and gradually we turn to rehearsals and scenes." 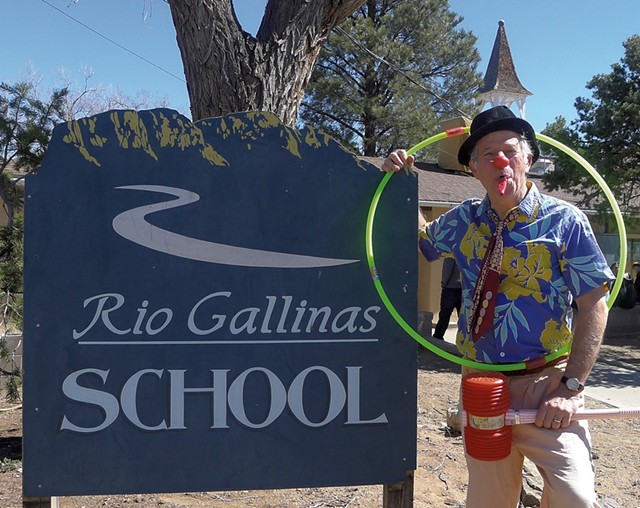 A few things have changed since the early days. The original Craftsbury camp moved down the road to Sterling College and then to Hardwick. Gould opened sister camps in Chelsea and Brattleboro. The Chelsea camp is now run by former campers Kailie Larkin and Sophie Wood. Gould, who is married to state Rep. Mollie S. Burke (P/D Brattleboro), leads the Brattleboro camp.

But the camp's format remains the same. Each summer, teens immerse themselves in one of the Bard's plays and cap the session with a performance.

Gould's life is full of creative accomplishments. As half of the Gould & Stearns traveling theater troupe, he has performed in thousands of shows, including the widely toured A Peasant of El Salvador, jointly authored by Gould and his performing partner, Stephen Stearns. Set in the turbulent 1970s, the play depicts a Salvadoran farmer and his family caught up in their country's civil unrest. The play raised funds and awareness for the Sanctuary Movement, a campaign whose mission is to provide a haven for Central American refugees. Gould's young adult novel, Write Naked — which features two aspiring teen writers — won the 2009 National Green Earth Book Award. In 2016, he received a Vermont Arts Council Award in Arts Education. 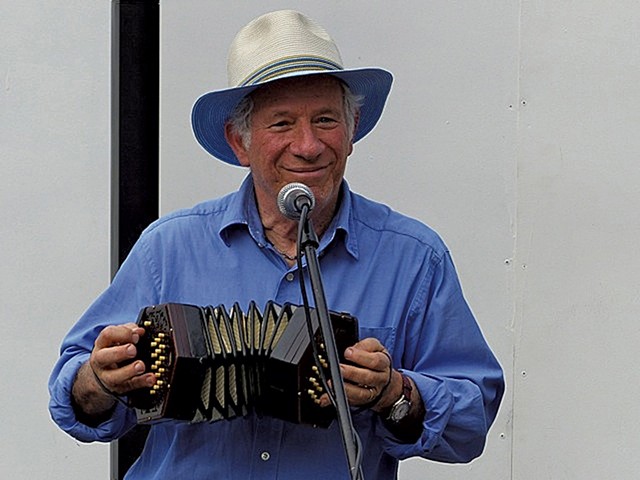 In 2002, Gould earned a PhD in comparative literature from Brandeis University. Currently, he teaches in Brandeis' Peace, Conflict, and Coexistence Studies Program. His most recent book, Horse-Drawn Yogurt: Stories From Total Loss Farm, published by Green Writers Press in 2017, is a collection of essays about his decade as a commune founder in the southern Vermont town of Guilford.

In the summer, though, Gould reigns over the Funnery. The day camp — with a homestay option — enrolls teenagers and an occasional 12-year-old. Gould cautions parents of prospective younger campers that Shakespearean plays are chock-full of bawdy jokes, and that he won't "walk back my punctilious explanation about what a joke means."

At the Funnery, campers' experiences and growth, rather than the final performance, are the focus. The camp embraces an attitude of acceptance, creativity and freedom to explore. Gould, a stutterer, acknowledges he's running the kind of summer program he would have relished as a kid.

"Funnery," said Hazen Union High School senior and repeat camper Audrey Grant, "has never been just a Shakespeare camp. It's a home." Grant loves the in-depth conversations about the play campers are challenged to perform in just two weeks. Through discussion and exercise, Gould guides the teens to look at Shakespeare both historically and also through their own contemporary eyes.

Some teens arrive complaining, My mom made me go to Shakespeare camp, but Gould insists that's because they haven't really experienced Shakespeare yet. High school teachers, he noted, "just don't know how to lift Shakespeare off the page, so we do a lot of damage control." 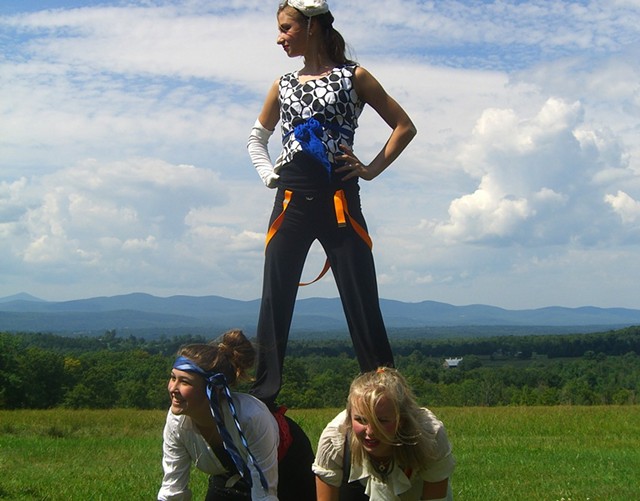 Each year, Gould selects one of Shakespeare's 37 plays and spends the winter carefully cutting it to about 75% of its original length. The campers — around 32 teens, with a staff of five or six former Funnery campers — start each morning with yoga, which emphasizes the importance of mindfulness. Ample time is then devoted to reading through the script.

When it comes to assigning roles, Gould doesn't rush, either. Campers may not score a coveted starring role, but he promises them that they'll leave fulfilled. Nurturing growth in young people delights him. When parents have asked him to do a summer camp for grownups, "I'm like, Why would I want to work with adults?"

Eighteen-year-old Mariana Considine of Hardwick, who will attend her fifth Shakespeare camp this summer, described the Funnery as "not a theater camp, it's really a life camp" where campers "learn so much about each other and the world around us." 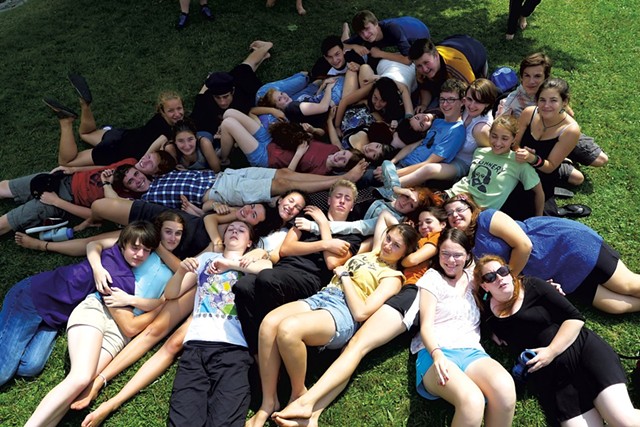 At the camp's heart lies dialogue about the connections between theater and the actors' lives. When the Funnery performed The Tempest, Gould asked campers, "Do you believe in magic? Have you ever had magical stuff happen? What would you do if somebody years ago when you were younger did a really awful thing to you that changed your whole life for the worse, and you had them in your power now? Would you be able to forgive them? Or would you want revenge?"

While discussion and forging friendships are paramount, campers know they must learn their lines. Since some characters, such as Macbeth, have many lines, four different teens might play the role in a single performance. Sometimes actors will switch in the middle of a scene.

"The audience loves the brilliance of really playing with the lines, knowing that we're never going to give them bad Shakespeare," Gould said. He never alters the original language. The teens, he said, play with "the absolute tip-top, highest quality language, and make it their own."

Each day, kids are pushed to improve what Gould names the sign of the four: heart, mind, body, voice. "Heart" strengthens empathy for fellow campers, their directors, the material, Shakespeare himself, and, above all, the audience. "Mind" is about learning — no summer slide for these campers. "Body" draws from Gould's years as a mime and refers to the importance of movement and imagination. "Voice" often takes years to master. "Some of my best campers, in their third or fourth year, suddenly found their voice after not being heard, because they were so shy," explained Gould. "Suddenly, they're leaping all over the stage and proclaiming, and I'm like, Yes! You've got it."

As a teacher who adheres to his own advice, Gould said he's determined to make everyone in the room believe, "I would not want to be anywhere else in the universe."