Teen Soaps Get Structurally Daring With the Hit 'Cruel Summer' 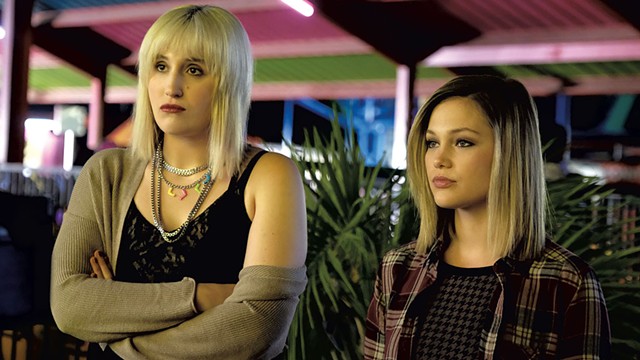 While Marvel's Black Widow set a box office record this weekend, I stayed home and checked out a less flashy form of Disney girl power. The first season of "Cruel Summer" recently finished airing on the Mouse-owned cable network Freeform (where you can stream it, as well as on Sling and Hulu). According to the Hollywood Reporter, the teen mystery set in small-town Texas was this year's most popular new cable drama among women ages 18 to 34.

What hooked me on this 10-episode show? (A second season is in the works.) A bold and potentially baffling narrative device: Each episode of "Cruel Summer" takes place on or around a single date in 1993, 1994 and 1995. From scene to scene, the story is constantly time-shifting in units of a year. Imagine the nonlinear structure of Greta Gerwig's Little Women, but with three parallel time frames instead of two.

In summer 1993, 15-year-old Jeanette Turner (Chiara Aurelia) is a sweetly nerdy kid with a happy home life and equally nerdy friends. But she dreams of hanging out with popular Kate Wallis (Olivia Holt), who has a sophistication Jeanette can only dream of.

In summer 1994, Kate has been missing for months, vanished without a trace. Jeanette, minus the braces and glasses, has stepped into her former idol's life — including dating her jock boyfriend (Froy Gutierrez). Then news rocks the town: Kate has been rescued from the home of her school's assistant principal (Blake Lee), who held her captive in his basement. Kate accuses Jeanette of complicity in her abduction, and the case becomes a national sensation.

In summer 1995, Jeanette is an outcast, her family and friendships fractured by the accusation. She brings a defamation suit against Kate, and the two girls prepare to face off in court as Kate struggles with the aftermath of her trauma.

In terms of dialogue, direction, acting and production values, "Cruel Summer" isn't far from solid CW fare. Most of the leads have that apple-cheeked Disney look, appealing straight to the target demo.

But creator Bert V. Royal's series stands out for its unusual storytelling technique, ideal for a twisty thriller. The show effectively keeps viewers guessing about who is telling the truth, if only by keeping them off-balance.

How did techniques that were once avant-garde become the stuff of teen dramas? Back in 2000, viewers were bowled over by the nonlinear storytelling of Christopher Nolan's Memento, which seemed so fresh that copycat episodes cropped up on popular shows such as "ER."

Today, it seems, Gen Z viewers don't even blink at a fragmented and out-of-order narrative. Is it because they grew up navigating the internet, the timeless jumble of '70s TV ads on YouTube and undated Tumblr posts? Or have two decades of flashbacks and flash-forwards on prestige TV primed them for a show in which we constantly have to remind ourselves when a given scene is taking place?

Either way, Royal doesn't spoon-feed this aspect of the show to viewers. Beyond a few markers to differentiate the time frames — degrees of color saturation, Jeanette's changing hair — we're on our own in puzzling out the entwined dramas of these two troubled teens.

As in all good thrillers, both protagonists turn out to be more complex than they appear. While good girl Jeanette has sneaky bad-girl moments, Kate struggles with the expectations attached to her picture-perfect life. It's clear why she's drawn to an older man who's articulate and thoughtful in a way her boyfriend isn't, and equally clear that the assistant principal's behavior is beyond the pale. There's ambiguity in this grooming scenario, as there is in life, but ultimately it rings true.

Aurelia is more convincing as the goofy younger Jeanette than as the hardened, morally questionable older one. But the supporting players bring '90s nostalgia and fun, especially Allius Barnes and Harley Quinn Smith — Kevin Smith's daughter — as Jeanette's two geeky friends, who grow apart from her while continuing to develop in story lines of their own.

It's not clear why, aside from the aforementioned nostalgia, "Cruel Summer" had to take place in the 1990s. With its teen characters who chat about their "trauma" and "PTSD," the show feels contemporary enough to remind us that times have changed. But summer and thrillers will always go together, and "Cruel Summer" is a pleasantly sinuous warm-weather entertainment.

"Mare of Easttown" (2021; HBO Max, rentable): One of the joys of small-town mystery series is how they flesh out an entire community. Like "Cruel Summer," this acclaimed Kate Winslet-starring whodunit shows how evil can grow close to home.

"Blood & Water" (2020; Netflix): In this mystery series from South Africa, a teen suspects that a stranger is her long-lost sister and transfers to the other girl's elite school to learn the truth.

The original print version of this article was headlined "Cruel Summer"