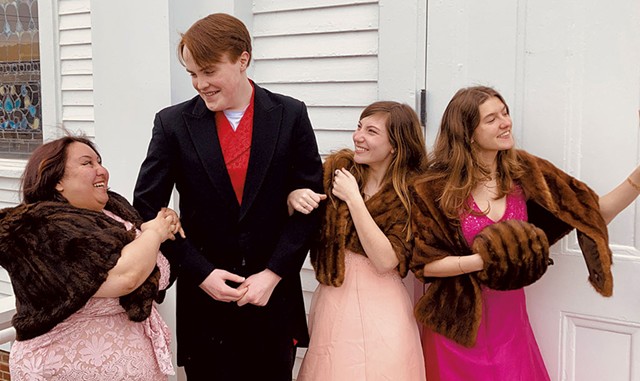 What can high school students do if they love both acting and classical singing? Typically, such teenagers are forced to choose between their talents, according to soprano Sarah Cullins.

"Either you focus on your classical voice and only sing in choir," she said, "or you sacrifice your technique and do musical theater."

A Burlington native, Cullins studied vocal performance in the Tufts University/New England Conservatory of Music double degree program and at the Mannes School of Music. Now, she offers a third option to students: opera, which demands high levels of both acting and classical singing. Operatic voice training alone requires supreme breath support, diction and the ability to sing in many languages.

Given that most students are unfamiliar with the art form, Cullins has developed an informal network of chorus and voice teachers around northern Vermont who refer their most talented singer-actors to her. In turn, Cullins invites the teens to participate in the nonprofit she founded, the Youth Opera Company of Vermont.

This weekend, the YOC shows off its accomplishments with an abridged act from Johann Strauss II's Die Fledermaus, which the company is calling "Orlofsky's Ball." The showcase act features arias, or solo songs, by all nine company singers, as well as plenty of Viennese waltz-inspired choral singing. Performances — sung in English with repeat verses in German — are at the Charlotte and Waterbury Congregational churches this Saturday and Sunday, April 30 and May 1, respectively.

At a rehearsal last Wednesday evening at Rice Memorial High School in Burlington, eight of the nine students, fully masked, did a walk- and sing-through of the show to Evan Allen's piano accompaniment. (Mary Jane Austin is the accompanist at performances.) Their casual attire, including torn jeans and vintage finds, contrasted with their mature-sounding voices.

Cullins paused to coach the group on 19th-century acting. "I want you to practice ridiculous bows," she told Rice sophomores Connor Trombly (singing Eisenstein disguised as a marquis) and Gabe Thompson (Frank, a prison governor passing as a chevalier).

"There are a lot of really interesting opportunities to explore how gender fits into the opera world." George Lane tweet this

Cullins then directed Count Orlofsky, sung by Montpelier's U-32 High School senior George Lane, to look over his guests with a host's eye. Lane, who is nonbinary, is singing a "trouser role" — a male role performed by a singer with a traditionally feminine voice. Strauss wrote it for a mezzo voice.

Lane, who has also sung the trouser role of Cherubino in Wolfgang Amadeus Mozart's The Marriage of Figaro with YOC, later said by phone, "I've never really been super-inspired by leading-lady ingénue roles. There are a lot of really interesting opportunities to explore how gender fits into the opera world, which has made me feel incredibly welcome in these spaces."

"Die Fledermaus is particularly suited to the gender fluidity of our day. That's one of the reasons I chose it," Cullins said in a phone call before rehearsal. Cullins made Dr. Falke, a jokester and Eisenstein's best friend, into a trouser role, too; Ambrose Cusick, a Burlington High School transgender sophomore, sings the traditionally baritone part transposed up an octave for his soprano voice. Mezzo-soprano Memphis Phillips, a nonbinary student who graduated from Essex High School in 2021, sings Faustine.

Cullins founded what she originally called the Youth Opera Workshop of Vermont in 2019 as a satellite program of the Middlebury Community Music Center. Organized around a semester of study culminating in a group performance, the first workshop resulted in a performance of selected scenes from operas by Mozart, Claudio Monteverdi and Henry Purcell.

Collaborations with Barn Opera in Brandon and Saint Michael's College Chorale in Colchester followed. When the pandemic put an end to indoor singing, Cullins organized virtual study and the summertime Project Serenade, in which YOC singers stood outside eldercare facilities around Chittenden County and sang to the residents. Last summer, the company relaunched live performances with Gilbert and Sullivan's The Pirates of Penzance.

Despite existing primarily during the pandemic so far, the YOC has turned out two singers who've gone on to focus on vocal performance at college. One is Sam Thompson (Gabe's older brother), a voice major at the Catholic University of America in Washington, D.C. In fact, Cullins got the idea for "Orlofsky's Ball" from Sam, who sang in CUA's performance of the act last year.

Wanda Sullivan, a senior at Harwood Union High School in Waitsfield, plans to study voice performance but has not yet chosen a college. (She was accepted at all the schools to which she applied.) During high school, Sullivan starred in her school's musicals and sang in honors choir while studying voice with a private teacher.

When she became Cullins' student last year, Sullivan said, she learned to produce "efficient, consistent sound — not forced, but using breath support and your full [body's] muscles to sing rather than just your throat.

"I love her. I'm absorbing everything I can," Sullivan said of Cullins and the YOC.

"Plus," the soprano added, "it's opera, which, I mean, I never did before last summer," when she sang in Pirates. "I don't really know that much opera, but I'm pulled to it. Sarah had us go to the Middlebury Town Hall Theater for the screening of Candide," a video production by the Opera Company of Middlebury. "That's literally the only opera I've seen."

"In general, if there is no Sarah, it's left up to the music teacher, and if they have no experience with opera, it doesn't happen," commented Kevin Ginter, the head of Rice's music department and YOC's board vice president. Four of his Rice music students — three of whom study voice with him privately — are performing in "Orlofsky's Ball": Trombly, Thompson, Ramsey Stephenson and Lili Diemer.

Ginter, a tenor from Huntington, attended Mount Mansfield Union High School. He sang in musicals and choruses, he said, but didn't start taking voice lessons until he was a sophomore at Castleton State College (now Castleton University), where he earned a bachelor's in music education. Inspired, Ginter went on to earn a master's in vocal performance from the Conservatory of Music of Brooklyn College.

"My voice teacher [at Castleton] was an opera singer," he said, referring to Suzanne Kantorski. "That was my first exposure to opera." The YOC, Ginter noted, is "really giving these kids a step ahead of a lot of people."

Cullins' own break came the summer before her senior year at Burlington High School: She was invited to sing in a Gilbert and Sullivan production of the (now-defunct) Vermont Mozart Festival. After her training, she launched a 10-year teaching and performance career in Bogotá, Colombia, before returning to Burlington in 2013.

"I don't think any student in Vermont thinks of opera as something they can sing or are interested to sing; they really don't have a context," Cullins declared. "So they need someone they trust to say, 'I think you have the voice to do this.'"

The YOC, she added, is "the opportunity I would have wished for."