A growing number of tech firms are getting wired in Winooski 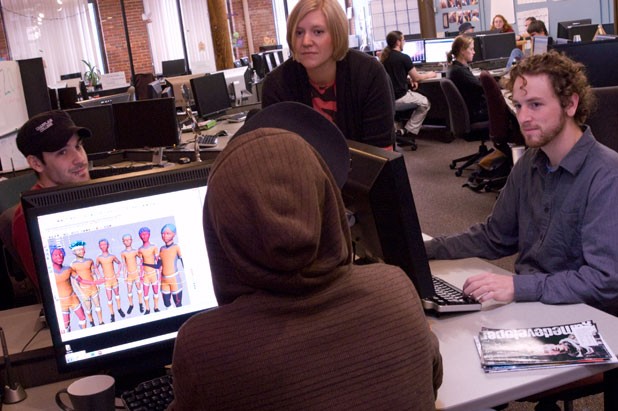 If the apple could become synonymous with digital technology, then why not the onion? That’s onion as in the Onion City — Winooski, Vt.

Tech companies and organizations have begun congregating in the 1.2-square-mile municipality’s redeveloped downtown and its two office/industrial parks. In fact, the working-class and immigrant-friendly city, often overshadowed by hip, high-end Burlington, might have the heaviest concentration of tech firms of any place in Vermont.

Sovernet Communications, a telecom company that built a warp-speed fiber ring in Winooski, bases 40 employees — including voice technicians, field service reps and call center operators — in a nondescript building on East Allen Street. CPA Site Solutions, which designs websites for accountants, racked up three-year sales growth of 223 percent from its offices on West Canal Street. Champlain College students working in the school’s Emergent Media Center in the Champlain Mill have created a video game that the United Nations is using in its global campaign to halt violence against women.

The presence of long-established companies such as BioTek, a global leader in life-science instrumentation, along with frisky start-ups such as MyROW International, which designs and builds fiber-optic and wireless networks, gives Winooski’s tech sector diversity as well as density. The city is also home to a couple of marketing firms, Fuse and New Breed, that rely heavily on digital media.

And more white-collar techies may be on the way to Winooski.

The Vermont Energy Investment Corporation, currently housed in two buildings in Burlington, is being aggressively recruited to relocate its 165 employees to the Champlain Mill, says Scott Johnstone, director of the conservation-focused nonprofit. The mill is “one of the places we’ve been looking at,” Johnstone reports, noting that in a tepid economy, prospective tenants do have a host of options. He adds that Winooski Mayor Michael O’Brien has been persistently pushing downtown Winooski as a desirable destination for the green group.

Which is not to say that O’Brien and the city were aggressive in courting the tech businesses that have already set up shop in Winooski. O’Brien says Winooski is happy to have them, but that its one-person economic development unit lacks the firepower to conduct a focused recruitment drive.

So, why do so many of them come to town? Transportation, for starters — the Champlain Mill is on two bus routes that originate at the Chittenden County Transportation Authority’s Cherry Street terminal. Bike commuters from Burlington have a safe, direct pedal to Winooski via the paved path that runs along Riverside Avenue. Those transportation assets, along with drivers’ easy access to I-89 and Burlington International Airport, are cited again and again by tech execs in explaining why they chose Winooski.

“You do pay a bit of a tax in the form of commuting from downtown Burlington,” says BioTek CEO Briar Alpert, referring to parking fees in the Queen City and the crawl up its Main Street to the interstate.

Ann DeMarle, director of the Emergent Media Center, adds that Champlain College’s decision to base its advanced computer lab in the mill was strongly influenced by proximity to student housing in the Winooski Falls development and its connection, via shuttle bus, to the college’s main campus in Burlington. College officials are currently considering whether to keep the center in the mill or move it to a Champlain building under construction in Burlington. Declaring “I love this space,” DeMarle says she will lobby for staying put.

New Breed Marketing is situated a stroll down the hall from the media center on the mill’s third floor. That allows for convenient collaboration, DeMarle notes. She says New Breed and nearby Fuse, which specializes in youth marketing, talk with her when they’re searching for talent or want to get involved in projects like the UN game.

In general, however, Winooski’s tech companies don’t appear to have much contact with one another. Alpert’s globe-spanning instrumentation firm, which now occupies 70,000 square feet of space in the Highland office park, doesn’t consult with Onion City businesses, he says, but adds that his employees do regularly travel less than a mile to UVM’s Laboratory for Clinical Biochemistry Research. That facility, with freezers holding 1.5 million biological samples, lies just across the border in Colchester off Route 7.

“We tend not to be connected to other tech companies,” says Susannah Noel, a spokesperson for CPA Site Solutions, which employs 17 web designers and support personnel. Tech firms also “don’t need a lot of flash,” Noel adds in reference to Winooski’s comparative lack of upmarket eateries where potential clients can be wooed over lunch. Tiny Thai on Main Street is a favorite takeout spot for her company’s desktop noshers, Noel notes.

Winooski does have an adequate number of restaurants, most local techies say. In general, “the downtown is getting nicer and nicer,” Alpert suggests, saying that as part of BioTek’s push for employee wellness, the company encourages its workers to walk, not drive, down Main Street for lunch and to use the YMCA on Malletts Bay Avenue or the health club in the Woolen Mill.

Brian Coppom, CEO of MyROW, can also walk to his West Canal Street office from his home in Winooski Falls. “It’s a fine place to live,” he says.

But there’s still almost nothing to attract diners or shoppers to the Winooski Falls project, more than three years after its developers began marketing retail space; Winooski Falls Market & Deli opened there last month, and a sign in the window across the street from the market announces that Opportunities Credit Union is coming in November.

Not even the presence of hundreds of college students living in Falls apartments or studying at the Community College of Vermont and Champlain’s Emergent Media Center has been able to attract retail shops. “There may have been expectations [on the part of the Massachusetts-based HallKeen development company] that didn’t match the local market,” observes Mayor O’Brien. He says he’s mystified by the continued dearth of retail activity in Winooski Falls.

Across the street, along the river, the Champlain Mill also remains mostly untenanted. Once filled with shops and a popular restaurant (Waterworks), its repurposed interior is now eerily quiet. (It was a lunch at Waterworks in 2002 that so impressed Galen Dow with Winooski that he subsequently decided to base his New Breed Marketing start-up in the Onion City.)

An office in the mill leased by the Vermont Software Developers’ Alliance (vtSDA) currently contains only a few scattered chairs and looks as though it hasn’t been used in months. Messages left on the alliance’s phone go unanswered. The vtSDA’s vice president Tom Jaros says the nonprofit promoter of Vermont tech companies does remain active — in fact, it’s a key organizer and sponsor of the Vermont 3.0 Tech Jam this weekend in Burlington. But the organization doesn’t use its office as a gathering place, in part because of problems with the mill, he adds.

Jaros, along with vtSDA board president John Canning, complains heatedly about parking limits in the 945-space garage built as part of the Winooski Falls redevelopment. “We chose Winooski because we got a great deal on the rent and the mill was convenient and had plenty of free parking,” explains Canning, who also presides over Physician’s Computer Company, which makes software for pediatricians; PCC’s office, with its 45 employees, is situated on the first and second floors of the mill. “Since that time, the city has totally messed up the parking situation,” he adds, saying two-hour metering “makes it almost impossible for our members to park and attend our events.” The tightened restrictions “are driving people out of the city,” Canning says.

Jaros, who runs a mobile software development business out of his home in Essex, says he’s considering leasing space in the mill but is put off by the parking issue. Mayor O’Brien, for his part, acknowledges these frustrations and reports that the city will be “tweaking” its parking rules.

The attraction of the mill for a small tech firm, Jaros says, lies mainly in the cost of rent. Office space there is advertised at $11 to $15 per square foot — less than prime space in the heart of downtown Burlington, but actually similar to prices in the Maltex Building on Pine Street, a cluster point for some tech businesses. Rents are listed at only $5.50 a square foot in the Hillside office park that’s about 100 yards from the southbound entrance to I-89 and is the home of Sovernet Communications and another tech firm, Ideas Well Done, which designs consumer products.

BioTek’s Alpert also applauds the city’s building-permit process, which has been “very manageable and predictable” for his expanding company. It’s partly for that reason, Alpert says, that BioTek has no plan to move from its home of 35 years. “We’re happy in Winooski,” he declares.

Winooski’s school system, meanwhile, continues to dim the city’s attractions — not so much for tech firms but for middle-class families. The local high school finished last in Chittenden County on a recent measurement of students’ proficiency in science. And results were shockingly poor for Winooski’s eighth graders: Only 4 percent were rated as science proficient.

That poses a huge marketing problem for a city trying to lure companies that require tech-adept workers. But for tech companies that want to give back to the community, it sounds more like a marketing opportunity.