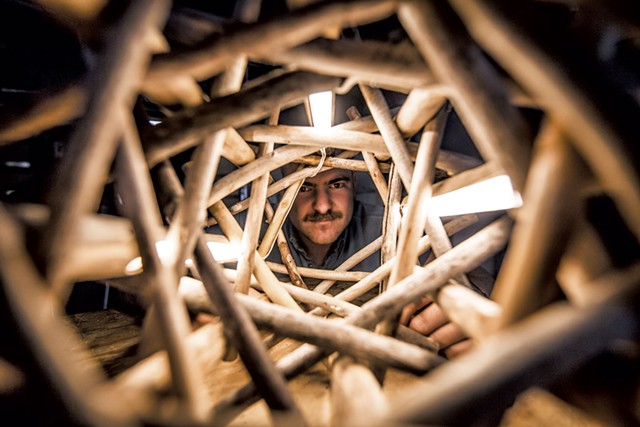 When Clay Mohrman moved to Burlington in June 2017, the 27-year-old artist and lighting designer had a plan — or at least the foundation of one: He would work with nature and light, his way. By August, Mohrman had secured a studio at the South End's S.P.A.C.E. Gallery. Without knowing exactly what he was getting into, he showed several of his sculptural driftwood lamps at the annual South End Art Hop in September. When he sold three of them that weekend, he felt like he was on the right track.

"As an artist, I've always been influenced by art and nature colliding," Mohrman said during a reporter's visit to his current studio at Generator maker space. Using found wood as his primary material, Mohrman plays with the tension between organic spontaneity and geometric order. He cites land-art sculptor Andy Goldsworthy as a key influence, along with fellow art giants Olafur Eliasson and Antony Gormley.

Though a newcomer to the state, Mohrman has developed his eponymous line, Clay Mohr Lighting, with strong local roots. He gathers driftwood from beaches and waterways and picks up branches while hiking.

For an extra Vermont touch, Mohrman has named each of his six designs for one of the Green Mountain State's peaks: Philo, Tabor, Equinox, Lincoln, Skye and Haystack.

His smallest design, the diminutive Equinox (starting at $175 and available in diameters of 10, 12 and 14 inches) is a hollow, spherical orb made from layered stacks of driftwood and held together with hidden pins. Inside is a strip of tiny LEDs, housed within a plastic and aluminum extrusion that can either be hardwired or plugged into the wall.

Mohrman has also been known to make one-offs, such as Woodward ($925), a floor lamp that makes use of a single, freestanding piece of driftwood. At the top of the gently curving piece, Mohrman has affixed spoke-like pieces of driftwood that encircle the LEDs emanating light from its center. The lamp's overall shape is distinctly treelike.

Mohrman first developed his taste for lighting design after graduating from London art and design school Central Saint Martins in 2013. The Boston native returned to his hometown to take a job at LED tech company Fusion Optix. There, over three years, Mohrman realized that his own aesthetics were perhaps more organic than techy. 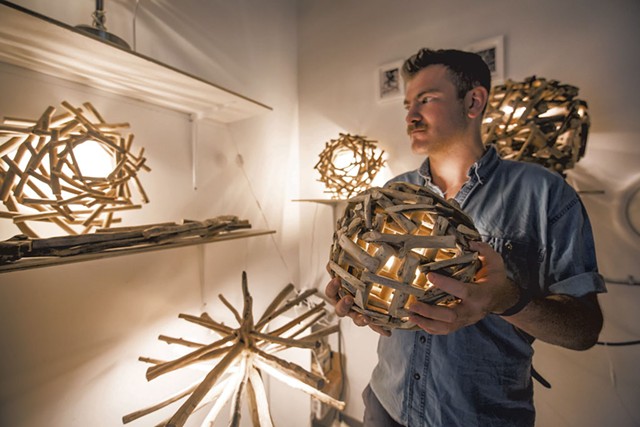 When he left Fusion Optix and relocated to Vermont, Mohrman took his experience and inclinations and, as he put it, "ran with the emotional side."

His creative and entrepreneurial efforts got a major boost when he was selected, along with three other local makers, to participate in Generator's Jump/Start initiative this past January through April. As a student in the small business intensive, Mohrman was given 24-hour studio access, a $1,000 stipend and free tool training. He also could take advantage of lectures from guest speakers and mentoring on topics such as brand development, market analysis, revenue generation and intellectual property protection.

"I think they were blown away by the quality of the design," noted Generator executive director Chris Thompson of the Jump/Start selection jury, which included Lee Bouyea of FreshTracks Capital, Matt Flego of M//E Design and John Antonucci of LaunchVT. "A combination of an organic, natural form with super-high-tech LED lighting was one of the things that really stood out."

In conjunction with the Jump/Start program, Mohrman also exhibited works in a solo show at Burlington's Karma Bird House in March.

Though his fledgling business is firmly grounded in an understanding of product design and business, Mohrman considers his work to surpass mere practical considerations. Lighting provides "a visual service," he said, adding that he hopes his pieces cultivate "an emotional attachment to [the] object, because it is providing an experience. Lighting is something that we engage with every day."

Recently, Mohrman has been taking his work one step further into the experiential realm: He's making upwards of 50 lamps for a September 29 performance at Burlington's Hive gallery. "Casting Coalescence: a harmony of light and sound" is a collaboration of Mohrman and Burlington musician ivamae, and it's billed online as "an emotional intersection of two artists working within different elements, but towards the same objective."

"This is not about an individual piece," Mohrman said of his business and practice. "It's about a whole experience."