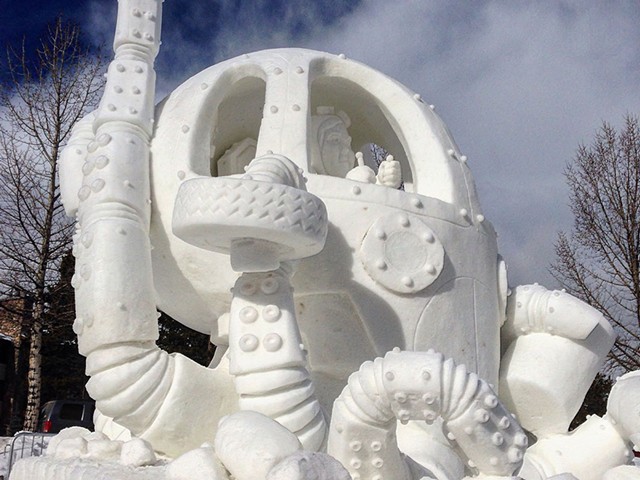 Last year, Team Vermont took the gold at the International Snow Sculpture Championships in Breckenridge, Colo., a five-day affair that gathers teams from across the globe for an icy showdown. The team's winning sculpture, titled "Rhonda and Her Recycling Robo-Octopus," referenced the educational maker movement with its depiction of a young girl and her animated, ocean-cleaning invention. This year, the Vermont sculptors are headed back to Colorado to defend their title.

Michael Nedell, a longtime member of Team Vermont and cofounder of Localvore Today, is all smiles as he talks about the upcoming event, which begins on January 24. But he's also serious. "We want to be able to stun [the judges] with graceful perfection," he says.

With this year's design, "(What's Your) Sine Wave," Team Vermont intends to do just that. It's the most difficult piece that team members Alex Dostie, Adrian Tans, Brooke Monte and Nedell will have tackled to date: an open spiral that completes three large coils and will stand 11 feet tall. Considering the quantity of snow they will have to remove from the 20-ton block, and the open space they'll create in the middle, Nedell says he thinks the process will be "dangerous as all hell."

The piece represents a conscious shift toward more challenging designs. Last year, Nedell recalls, as they prepared to begin cutting into "Rhonda," Monte reminded the team that they knew what they were doing. It might seem like a redundant statement, but to Nedell it felt like a push to tackle something more exacting, he says.

"The idea has been in my head for a year and a half," Nedell says. It was inspired by a 20-foot sine-wave-simulating art installation he created with Dostie for Phish's summer festival Magnaball in 2015. A sine wave, or curve, represents the oscillations of amplitude. "We started talking about how the more perfect a sound is, the more perfect the wave form," Nedell continues.

The design of this particular piece is a meditation on harmony — something the team thinks might be particularly appealing in the current political climate.

But the sculptors have another climate to contend with. While Old Farmer's Almanac predicts "bitterly cold" weather in the Breckenridge area between January 19 and 27, Team Vermont will be in trouble if the temperature rises. Of course, so will the other competitors.

Nedell recalls that, in past events, the German team attempted risky designs like the one Team Vermont will tackle this year. Last year, the Germans' sculpture buckled in the warming temps before it could undergo judging. "I think the Germans are going to like this piece," Nedell adds with a chuckle, "for the amount of air."