Team Behind Santiago's to Take Over Kitchen at Chile North 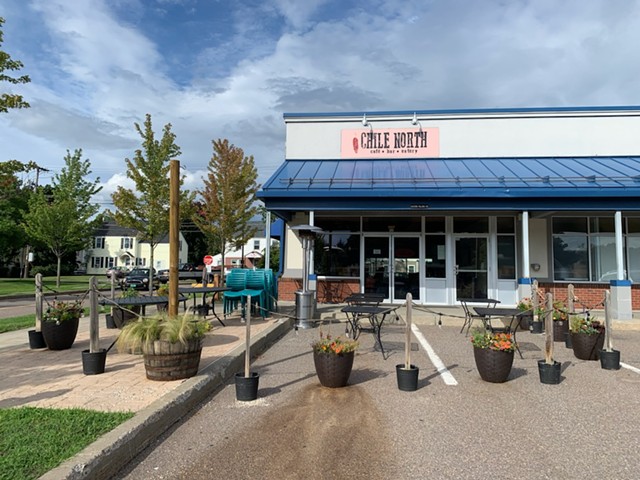 Changes are coming to Chile North, one of Burlington's newest restaurants. Mara and Spencer Welton opened the brick-and-mortar version of their Chile Colorado food cart with business partners Carina Driscoll and Blake Ewoldsen on July 8. In a social media post on August 19, the business announced the Weltons "have decided it is time to move on."

Driscoll and Ewoldsen will continue operating Chile North in the former Smitty's Pub space at the Ethan Allen Shopping Center on North Avenue. The café, bar and eatery was open over the weekend with drinks and bar snacks.

Starting this Friday, August 27, the team behind popular Cuban pop-up Santiago's will be in the kitchen.

Oscar Arencibia first launched Santiago's with weekly takeout dinners in April 2021, working out of the kitchen at Zachary's Pizza in South Burlington. For the past few months, he and business partner Luis Calderin have hosted Wednesday pop-ups at Heart n Soul by Mark BBQ in Essex Junction.

"It's all happened very fast," Driscoll told Seven Days in a phone call with Arencibia and Calderin on Monday. 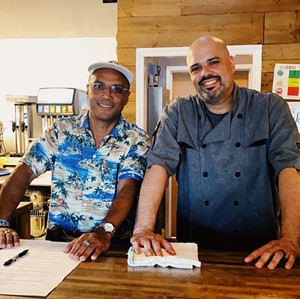 Driscoll and Calderin have been friends since middle school; she knew Arencibia and Calderin were actively looking for a restaurant space, and reached out to see if they'd be interested. They've decided to team up for six weeks "and see where it leads," Driscoll explained.

"It's a beautiful space, in a really thriving community in a great neighborhood," Calderin  said. "We are really excited to have our first Burlington home, collaborate with Carina and be able to offer our food and our culture to people with more frequency."

The menu will feature favorites from the Santiago's pop-ups, Arencibia said, but will lean more towards smaller plates and bar-friendly food. They're planning to offer a frita Cubana — a classic Cuban hamburger — as well as ham croquetas, media noche sliders and chicharrones.

"We're all suffering — all restaurants, the entire restaurant industry — from just the lack of a product, and being able to get our hands on it,"  Arencibia said. "So that is also a determining factor on what we're going to be able to serve."

Eventually, they hope to add a Cubano to the menu. "Vermont has never had an official Cubano sandwich, because there hasn't been two Cuban guys making them," Calderin said with a laugh. "Now there will be."

Continuing the space's legacy as a New North End watering hole, the bar will serve beer and cocktails — particularly rum-based drinks — that fit with the new Cuban menu.

"We're super excited about them and their food," Driscoll said of Arencibia and Calderin. "Luis grew up in Burlington and knows that there is a hunger for food that is delicious and different and exciting."

Chile North will be open Wednesday through Saturday from 4 to 10 p.m., with dinner served between 5 and 9 p.m. for indoor and outdoor dining as well as takeout. A limited number of food orders will be available each night.

Meanwhile, Mara and Spencer Welton have returned to their mobile model: Chile Colorado is currently taking pre-orders for breakfast burrito delivery this Wednesday and Thursday.

Prior to opening Chile North, the Weltons had been cooking up food from their native southwest — including Chile Colorado's namesake dish — in their certified home catering kitchen. They launched the food cart biz in April 2020, offering home delivery and hosting weekly pop-ups at the Burlington Elks Lodge and Simple Roots Brewing.

In a post on Chile Colorado's social media, the Weltons explained, "Turns out that having a brick and mortar restaurant did not align with our values or business philosophy. We had to make the hard decision to leave the partnership and space behind."

On Monday, in a text message to Seven Days, Mara wrote, "At the moment we are getting back to what makes us happy — breakfast burrito delivery to all our chilefans! ... We are exploring ways to share the food we love with our chilefamilia within the current food landscape."

Those explorations include options for their Casita Cart and expanding re-heatable meal offerings; the Chile Colorado website and social media will be updated daily with the couple's plan and schedule.

"We are humbled by the outpouring of love, offers and suggestions from our community to help us find the perfect fit," Mara wrote.