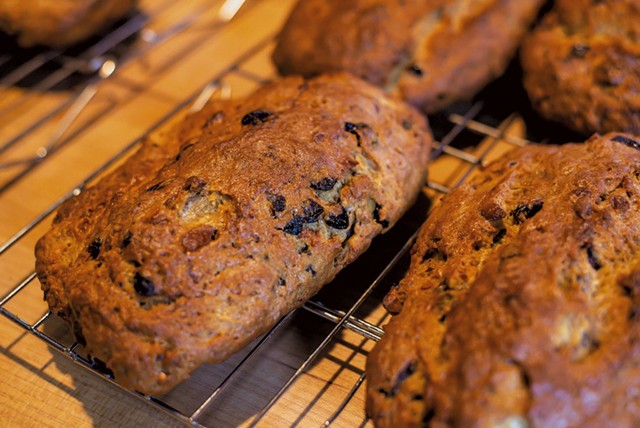 A pair of centuries-old European Christmas baking traditions waltzed gracefully with each other around a Fairfax bakery on a chilly November Sunday. Evocative and festive aromas of candied citrus, macerating dried fruit and warm spices hung in the air as two expert bakers guided workshop participants through the intricacies of making German stollen and Italian panettone.

The classic butter-rich, fruit-studded breads take time, know-how and attention at just the right moments. The six-hour, in-depth, hands-on workshop was not designed for the casual baker. "We really want to teach people some substance," Meyer said.

Among the six participants, several were serious home bakers. Hien Le of Kirkland, Wash., even shared her aspiration to leave her day job and become a professional baker.

On the other end of the spectrum was Amanda Rohdenburg of Burlington, who had come with a friend. She had never baked bread at home, "not even a little," she admitted with a laugh. "I'm just in it for the snacks."

Throughout the day, Meyer (team stollen) and Gulley (team panettone) passed a virtual baton back and forth according to the needs of each bread.

About an hour into the workshop, Meyer politely asked Gulley, "Can we move from Italy to Germany? I don't need too long."

The panettone Gulley was demonstrating was slower and more finicky than Meyer's stollen. He was baking with natural leavening while she was using packaged yeast.

Either bread can be made with natural leavening, a rising agent that includes wild yeasts and bacteria. It is often known by its French name, levain, or called sourdough starter, even when the resulting bread does not have the tang of a San Francisco sourdough.

"Yeast is like rocket fuel for your bread," Gulley explained. "Levain is more like riding on a snail."

Even if made with the same rising agent, the two holiday breads bake up very differently based on various factors. Panettone has a lighter, airier texture; stollen is heavier and denser.

Meyer, a native of Berlin, Germany, who moved to Vermont with her husband in 2008, has both a personal and professional relationship with stollen, whereas Gulley's connection to panettone is purely work related. Red Hen bakes and sells about 115 large and 400 small panettones from mid-November to Christmas each year. They are only available at the Middlesex bakery.

For Meyer, 51, the annual tradition goes back to childhood. "I'm completely immersed in stollen," she said. "I grew up with it."

During a bakery job she held as a teenager, it was Meyer's responsibility to pick off any burnt raisins after the stollen had been baked to a burnished mahogany.

"We had a very strict boss, very old-school," she recalled. "If the bread came out not right, he would slap you."

On the plus side, she became really good at picking off blackened raisins, as she demonstrated deftly during the workshop. "And it really instilled my sense for good ingredients," Meyer added.

Each day on that job, she dipped "hundreds and hundreds" of loaves into melted organic butter from grass-fed cows to seal the bread for curing up to several weeks.

Curing develops flavor. "I wouldn't even think of cutting into stollen before one week," Meyer said. "It is delicious the next day, but the same stollen put away for four weeks has much better flavor."

Thankfully, there was no slapping during the Sunday workshop, just plentiful encouragement and good ingredients in a sweet little bakehouse in the woods.

"I was always committed to bread." Heike Meyer tweet this

Meyer had been working in New York City as a producer for German public radio and television when she and her husband, Jens, decided to move to Vermont.

"I really wanted to do food, and we knew Vermont had a community that was very active in food," she recalled. Specifically, she added, "I wanted to do something with bread. I just loved bread. I was always committed to bread."

The baker started selling naturally leavened, whole-grain breads and pastries at the Westford farmers market in 2010 under the name BeeSting Bakery. Customers asked if she taught, so she decided to try. After a few years of juggling classes and production baking for retail stores, she realized, "If I really want to do this right, I have to focus on the school."

Meyer said she thrives on "the pure joy of baking bread, of creating and baking for and with people ... That's why the school is so perfect. You get together and bake."

Brot now offers educational workshops most weekends May through December with a growing roster of guest instructors such as Gulley — who has also taught at the renowned King Arthur Flour Baking School in Norwich — and nationally known bakers, including James Beard Foundation award winner Sarah Owens and highly regarded blogger Maurizio Leo.

On some summer and fall weekends, Meyer opens her Fairfax bakery for limited bread sales. Breads are also available seasonally at a local farmstand and on the menu at Misery Loves Co. in Winooski. Brot stollen, along with lebkuchen and zimtsterne Christmas cookies, are sold direct and through City Market, Onion River Co-op during the holiday season.

January through April, Meyer takes a break to travel and learn. This year, she attended a three-day stollen course at the German National Bakers Academy. It covered 25 different recipes, even a vegan version made with olive oil that she included in the Sunday workshop.

Christmas breads have long been a tradition in Europe, Meyer explained to the group. But since the season was also a time of fasting, bakers were not permitted to use butter, only oil. "It was to keep you down to earth, so you would concentrate on more important things," she said. 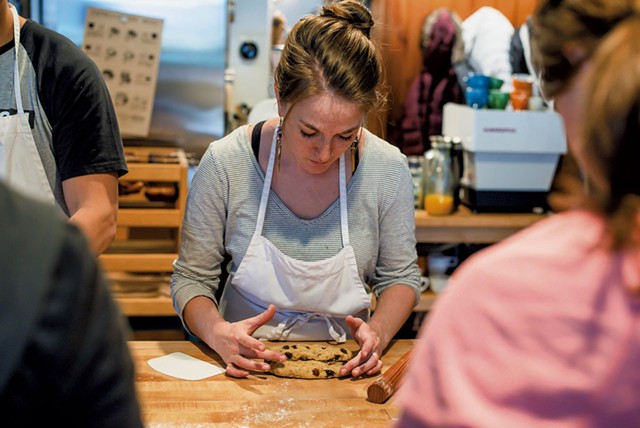 In 1491, in response to a specific request from the region around what is now the German town of Dresden, the pope penned the famous "butter letter." It permitted bakers to pay for the right to use butter; that revenue then funded church construction.

The most renowned stollen, known as Dresdner Christstollen, can be baked only in that city and must meet very strict recipe specifications. Even though Meyer follows the Dresden recipe, because the loaves are baked in Vermont, they must be called premium stollen.

She also described the outdoor Dresden Christmas market, where all 100-plus official Dresdner Christstollen bakers set up their stands. "On a cold day, you go to your favorite stollen baker, buy a slice and get some gluhwein, hot mulled wine," she said. "The Italians, they stay in all cozy and eat their panettone with a glass of red wine."

For either bread, Meyer said, "This is a once-in-the-year special treat. You want to use the best ingredients: the best butter, the best fruits, the highest-quality liquor [to soak the fruits]."

Meyer candies all of her own citrus. "It just brings so much flavor to it," she said, handing around a small bowl for tasting. She also grinds her stollen spice mix fresh from whole spices. It includes cardamom, mace, allspice, cloves, star anise, cinnamon, coriander, nutmeg, ginger and vanilla seeds. Everyone carefully sniffed a sample.

"It's like a gourmet version of the pumpkin spice latte," joked workshop participant David Chen of Shelburne.

"You can play around with it at home," Meyer said, encouraging everyone to make their own unique spice mix.

Baking bread, however, does not allow for too much playing around, until you're a seasoned baker.

"This isn't rocket science. It's more experience than anything," Gulley said, before admitting that even he has failures sometimes. "I screwed it up royally this week," he said ruefully, noting that his first trial run of panettone suffered from room-temperature challenges.

Both instructors agreed that using a scale and a thermometer is essential for success.

"As many variables as you can take out of your baking, the better," Gulley said.

Precision, though, must be balanced with less scientific insights. At many points during the workshop, the instructors urged the students to touch, smell and even taste the doughs.

"Baking is about feeling," Meyer said.

Everybody left the workshop with a sheaf of instructions and information, their own loaves of stollen, a small container of starter, and a formed panettone to bake the next morning after a final rise.

Earlier in the day, Meghan Butler of South Burlington explained that she had come to learn about panettone, which is a Christmas tradition for her Peruvian boyfriend and his family. Interestingly, the holiday bread traveled with Italian immigrants to South America.

"They stay up late and eat it at midnight," Butler explained. "We bought 10 of them last year, and I'm taking this class so I can find out if I can make them, or eliminate that possibility."

After the workshop, how did she feel?

A little overwhelmed by the complexity, Butler admitted, "but I will probably try it."