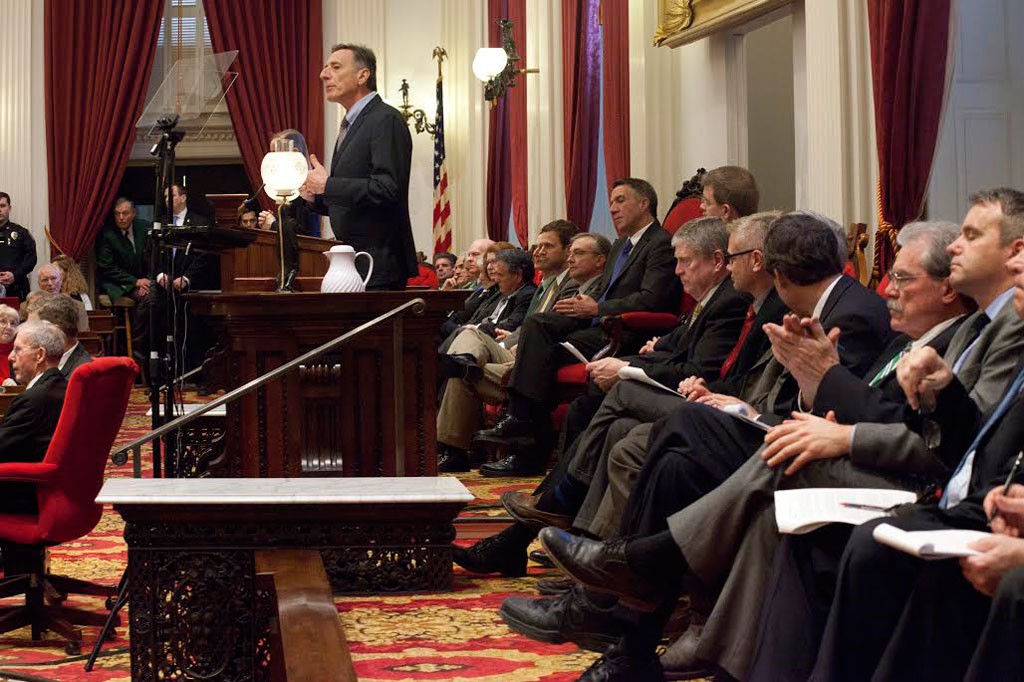 For the past week, he's been prattling on to anyone who will listen about legislators' relentless quest to raise revenue — and his brave efforts to stop them.

"They're raising taxes on virtually everything in a time when Vermonters are saying, 'Please, don't raise my taxes,'" he told the Burlington Free Press Monday.

To be sure, it's fashionable this time of year to dump on legislators. As they labor to close yet another budget gap — this one wider than usual — the tax-writing committees are dusting off all the old standards. Among the potentially taxed substances: candy, soda, cigs, satellite TV, bottled water — even those nasty vending-machine hamburgers.

Many of the proposals will die a quiet death — deep-sixed by dark-suited, corporate lobbyists — before the legislature adjourns in less than two weeks' time. But, heck, it's a great opportunity for demagoguery!

As Shummy put it to Vermont Public Radio last week: "Vermonters do not want us raising every single tax that we can think of, and some that have not been thought of before."

So the governor, heroically, has demanded an additional $10 million in budget cuts and a corresponding $10 million reduction in new revenue. Last Thursday morning, he dispatched his secretary of administration, Justin Johnson, and his finance commissioner, Jim Reardon, to unveil his proposals to the Senate Appropriations Committee.

Except, the handout they delivered — marked "DRAFT - Confidential" — included just $5.8 million worth of recycled ideas, including cutting state payroll by another $2.87 million. Combined with another few proposals they said were still being ironed out, the package totaled $8 million.

The committee was not impressed.

For months, its members had been combing through the budget, scouring it for savings and taking incoming fire from every special interest group in the Statehouse. They'd already passed their version of the budget — two days earlier.

"It's been pretty lonely in there all winter," Sen. Bobby Starr (D-Essex/Orleans) remarked. "I woulda thought they would've been in at least a month ago, if not five, six weeks ago, offering some suggestions."

To be fair, the governor has offered one pretty serious suggestion: a far bigger tax hike than anything the legislature is considering.

By contrast, both the House and Senate are looking to raise roughly $35 million to balance the budget. Factoring in new water quality and health care programs, the House has approved a total of $55 million in additional taxes — less than half of what Shummy wanted.

And he's the one talking smack about a tax-and-spend legislature?

Now, that's not entirely true. Shumlin's budget was balanced for about five days in January. But after the state's Emergency Board downgraded revenue projections by $18 million less than a week after his budget address, Shumlin refused to say how he'd make up the difference.

Instead, he traveled around the state, pandering to those threatened by proposed budget cuts. Even as the House Appropriations Committee struggled to find the savings he wouldn't, Shumlin went to Bennington in March and pledged to keep the budget-bleeding Vermont Veterans' Home alive.

"I have fully funded the Vets Home because I believe the veterans deserve our respect," the gov told the Bennington Banner at the time. "I have been the governor who has stood by our veterans' home."

Months after he outlined a plan to cut less and tax more, Shummy suddenly found religion.

"I believe that the current budget framework needs to cut more and tax less," he told the Vermont Press Bureau last week.

It's unclear whether the gov is simply striving for a cheap and easy headline — "Shumlin Calls for $10 Million in Budget Cuts" — or whether he's deluded himself into thinking he's a fiscal conservative. Either way, his friends in the Statehouse make an easy target.

"He's never been shy about making the legislature the enemy," posits Rep. Chris Pearson (P-Burlington), who leads the House Progressive Caucus. "It's been a very blatant campaign strategy of his in years past. I don't know that it's more complicated than him being pretty down and out and figuring maybe he can try to boost himself by attacking the legislature."

The gov has just cause to feel a little down and out.

He nearly lost last fall's election to a comically ill-prepared opponent. A month later, he abandoned his chief policy priority, single-payer health care reform, enraging the left. And for the past four months, he's watched the central plank of his legislative agenda — a payroll tax to remedy the Medicaid cost-shift — splinter into pieces.

It's not surprising that Shumlin wants to take his toys and go home.

"Now that [the payroll tax is] not happening, I as governor have to say, 'OK, if it's not going to happen, I have to cut the budget further and not just turn to Vermonters and say: Pay higher taxes,'" he told the Freeps.

Translation: Legislature, because you wouldn't raise the $90 million tax I wanted, I'm not gonna raise the $25 million in taxes you want.

So what happens next?

As the House and Senate work to resolve the differences between their respective budget and tax bills this next week, Shumlin will likely wave around his veto pen. In years past, he's always won such end-of-session skirmishes, but maybe this year will be different.

After all, there's blood in the water.

According to Fair Game's patented flip-flop-o-meter, Shummy has pulled a switcheroo on at least six stances in the past six months alone: his (former) opposition to raising broad-based taxes, enacting new gun laws, ending the vaccination philosophical exemption and mandating paid sick leave; his support for single-payer; and his insistence that Vermont Health Connect does — or doesn't, depending on the day — face an end-of-May deadline.

Perhaps legislators will finally realize that his veto pen is broken.

No matter how it all goes down, Shumlin will surely unfurl the "mission accomplished" banner on his gubernatorial aircraft carrier and declare the dismal legislative session a success.

It's a heads-I-win, tails-you-lose proposition: Whether your taxes go up less or more than the legislature wants, Shummy can take credit.

What's Past Is Prologue

As Attorney General Bill Sorrell has faced questions this past month about his campaign fundraising and spending practices, his 2012 Democratic primary opponent has been lying low.

Sources say Chittenden County State's Attorney T.J. Donovan is likely to make another go at the AG's office in 2016, whether or not Sorrell runs for reelection, but Donovan himself won't say a word.

"We'll see what the future holds," he says. "Right now I'm just focused on my job, and I think we want to let the legislature conclude their work and then make a decision sometime after that."

When Vermont's 14 state's attorneys voted last week to determine whether there was sufficient evidence to investigate Sorrell's actions, Donovan recused himself. That's understandable, given that one of the charges — alleged illegal coordination between Sorrell and a Democratic super PAC — relates to their 2012 race.

But here's Donovan's explanation: "I would just say I recused myself because of past and possibly future considerations."

As for the past, Sorrell himself was asked Tuesday on WDEV's "The Mark Johnson Show" whether he would run for a 10th full term. It was on that very show a year and a half ago that the AG made his last campaign declaration.

"Oh, man. We're 18 months out from an election," Sorrell said. "I'll deal with that closer to the time."

Pressed again, he said, "Sometime late summer, fall I'll address that, but I've got other things on my plate right now — both important matters and this thing we've been talking about today."

Johnson asked whether Sorrell had a made a deal with Donovan before the 2014 election that he'd serve another term and then retire, a rumor that has long circulated in Montpelier.

"I have maintained my independence," Sorrell responded cryptically. "And obviously I'm getting close to the end of my career as the longest serving AG in Vermont history, and I'm takin' 'em one at a time now."

Farther south, Montpelier's twice-monthly community newspaper has become a certified nonprofit. That'll make it easier for the Bridge, which has faced serious financial challenges, to raise money and stay afloat.

The newspaper made a splash in March when it raised more than $12,000 through a crowd-funded Kickstarter campaign. Among the prizes it offered was recognition on the front page, right below the banner, to anyone who contributed $1,000 or more.

The latest edition featured the words, "This issue sponsored by Warren Kitzmiller."

Yep, that's the same Kitzmiller who represents Montpelier in the Vermont House and is occasionally covered by the paper.

"I did it to help a friend," the pol says, referring to editor and publisher Nat Frothingham. "His paper was struggling. He was looking for money. And I was in the position of being able to offer him some."

Kitzmiller says the donation isn't any more likely to influence the Bridge's coverage of his political life than his longstanding friendship with Frothingham.

"He probably would be reluctant to really criticize me, although he has criticized me in the past on minor things," the House Democrat says.

Frothingham says he sees no reason why he wouldn't accept money from political figures. It's not as if the donation is secret.

"I think we've just disclosed it on the front page of the Bridge!" he says. "How much bigger can you get?"

As for whether it might influence his coverage, Frothingham says, "You know, I'd like to be able to say, 'No, not at all,' but I don't know that that's true ... I don't know that any of us realistically are immune from the various whims of influence that blow on us. I mean, I'm sure that the same might be true of the paper you work for."

To resist influence that might distort coverage should be the goal, he says, "but to deny that influence is out there strikes me as not totally honest."

The original print version of this article was headlined "Tax Facts"