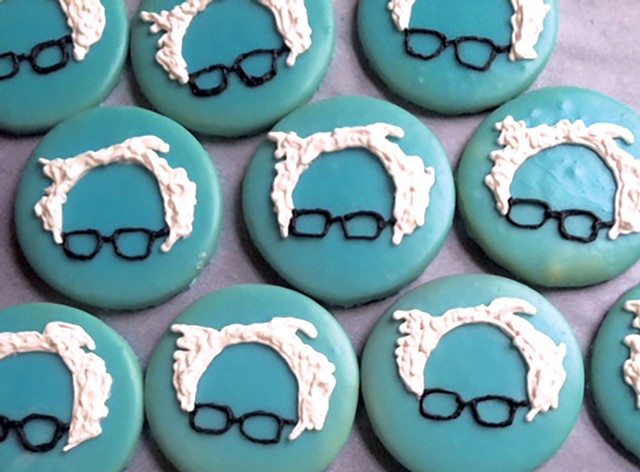 With Sen. Bernie Sanders on the campaign trail, local food and beverage businesses are creating special treats in his honor. After Vermont's junior senator declared his run for the presidency, Nutty Steph's started selling dark-chocolate Bernie Bars — made with a "liberal" amount of sea salt.

And the Middlesex chocolatier isn't alone. As the campaign careens toward March 1, or Super Tuesday — when 13 states, including Vermont, will host democratic primaries or caucuses — at least two businesses are celebrating Sanders with one-day-only treats.

The special beer (which Saxon originally brewed last year) will be available on draft, along with eight other offerings, including ZG's Bretthead IPA, the hop-forward Belgian-style Côte de Champlain and the dry-hopped Kellerbier pilsner.

The brewery will donate 20 percent of its can sales to HeadCount — a young-voter advocacy group that hosts registration drives at concerts and festivals — blending a get-out-the-vote component with hometown Bernie bolstering.

"As Vermonters, we know Bernie as an independent," ZG cofounder Matt Wilson tells Seven Days. The event is more a celebration of Bernie and his local roots than it is about politics, he adds. "It just feels like we're at a once-in-a-lifetime opportunity," Wilson says. "We have one of our own going for the highest office in the land — and doing a really good job at it."

If you've ever wanted to eat Bernie Sanders' face, now is your chance. For Super Tuesday, Betsy Hutton, pastry chef at Gourmet Provence in Brandon, will cook up several dozen Sanders-inspired butter cookies with a milk-based vanilla icing. She'll use royal icing to draw an outline of Sanders' face on each cookie, then sell them for $4 a pop. "I'm not sure how many to make," Hutton tells Seven Days. "I'm not sure if they'll be a big hit or not. But he's such an iconic figure right now, I thought it would be so fun."

The original print version of this article was headlined "Yummy Bernie"