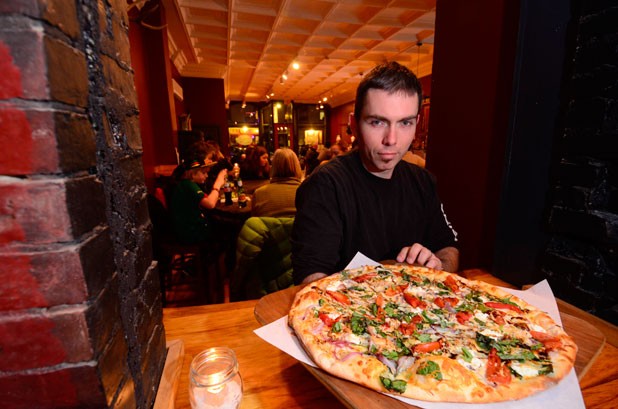 At least 44 toppings are on offer at the Blue Stone Pizza Shop and Tavern, Waterbury’s newest eatery. The first time I skimmed through them, my eyes sort of glazed over. The waitress kept checking back as I deliberated — over red sauce or pesto, herbs and mushrooms and olives, and unlikely morsels such as tofu, walnuts, pineapple (which some pizza eaters consider an abomination) and duck sausage (which sounded irresistible).

By the laws of permutation, 44 possible toppings translate to millions of different combinations. If you’re vegetarian and adventurous, you might combine tofu with artichoke hearts and chèvre with jalapeños or broccoli.

As I’m usually happiest with a well-crafted margherita pizza, I cut through the noise and ordered a small pie with pomodoro sauce, mozzarella and basil and hoped for the best.

Based on the Blue Stone’s pedigree, the pie had a high probability of success. Chef Vincent Petrarca was until recently head chef at Positive Pie II in Montpelier, and his partner, Chris Fish, is a New England Culinary Institute grad who has worked as both an ice sculptor and a sous chef himself. The duo launched the Blue Stone late last year.

Petrarca and Fish set up shop at 13 Stowe Street, where for the previous 18 years chef Jan Chotalal had served up enchiladas, shrimp saag and jerk chicken at her fusion restaurant Marsala Salsa. Last summer, Chotalal experienced a double whammy: She learned she had breast cancer, and she lost her lease. (She’s now serving her fare at nearby Cider House Barbecue and Pub.)

Despite the dodgy karma, Fish and Petrarca’s renovation of the venue is elegant and smart: They broke through a wall of the erstwhile cozy room and created a cavernous, airy space with brick-red walls, a long bar along one side, and at least 50 seats at both high and low tables. In one corner sits the eponymous blue stone, a dark, polished well stone some six feet wide, which came from an 18th-century farmhouse in Pittsford. Resembling petrified water, the rectangular stone has a hole in the center and serves as a communal table. Behind it, two arched doorways lead to another room with more seating and a take-out counter for slices and pies to go.

Despite the two huge flat-screen televisions flanking the bar, on a quiet night the room is placid and welcoming, the service attentive. Yet when we returned on a busier night and sat at the bar, we had to flag down a bartender for almost everything, from menus and water to refills and dessert. The Blue Stone can be a clamorous joint with an après-ski feel, puffy jackets thrown over the backs of chairs and a mostly young crowd standing around with pints, waiting for tables.

Perhaps wisely, Petrarca and Fish didn’t try to create another destination for beer geeks; with at least two nationally known beer bars nearby, they took the middle road. Twelve taps behind the bar decant mostly craft brews (think Rogue and Narragansett Brewing Company), and another eight beers are available by the bottle. The wine list is utilitarian, too, with a few big brands by the glass and an eclectic choice or two mixed in — though, during our visits, no light red was available. Those in search of something stiffer can choose from a compact menu of signature drinks, such as the Old Fashioned Bailout — a blend of Old Grand-Dad bourbon, Cointreau, bitters, a champagne float and a lemon twist that is slap-you-in-the-face boozy.

The Blue Stone’s motto is “Serious Pizza — Humble Food — No Bull,” and the menu lives up to it. The apps list is short — wings, a few salads, a Barn Board ($7.50) with hummus, tapenade and veggies. Puzzlingly for a pizza restaurant, that list also contains two flatbreads and one bruschetta; perhaps the motto should include “big carbs.” Even so, the prosciutto-mozzarella bruschetta ($8.50) was tasty — charred slices of French bread were layered with baby arugula and topped with plump, mozzarella-filled rolls of prosciutto. The three slices were diagonally drizzled with sticky-sweet balsamic reduction, a touch that appeared on several dishes.

Kickin’ Wings ($8.50) with chipotle butter had a subtle bite. The real first-course standout for me, though, was the Pitchfork Salad ($8.50 full, $4.50 half): baby greens sprinkled with feta crumbles, sunflower seeds and cubes of earthy, roasted tofu, all tossed in a lemony tahini dressing. It was a leafy life raft in a doughy sea of pizzas, wraps and flatbreads.

My no-frills pizza arrived on a thin crust with a liberal shower of basil chiffonade; splotches of white cut the surface where fresh mozzarella was layered over the shredded stuff. Though the crust could have been crisper and the sauce more ample, the pomodoro had a cheeky punch and lots of oregano.

Two other pizzas were less impressive. The first, called the Blue Stone, was culled from the Signature Pizza menu — $11 for a personal size (10 inches), $16 for small (14 inches), and $21 for a large (16 inches). Despite the base of white garlic sauce and a busy top coat of chèvre, roasted tomatoes, red onions, basil and shredded smoked chicken — as well as that ubiquitous balsamic reduction — the pie was not quite flavorful enough, sort of like when you mix bright paint colors and end up with brown.

Our custom-designed pizza of Blythedale Farm Jersey Blue Cheese, Kalamata olives and duck sausage was a letdown, and not because of our unorthodox combo; rather, because the toppings were too sparse. At $2.50 apiece, they could have been more ample, we thought. My friend also wished there had been something sweet (other than pineapple) with which to top the pie.

The Blue Stone also offers calzone and Stromboli. Despite its hulking size and delectable, nut-brown top, and despite the tide of melted mozzarella and ricotta that spilled from it, the plain calzone ($8) was too doughy. Next time, I might do better to fill it with one or two of the 44 toppings.

The Blue Stone also has generous wrap and sandwich choices, and the grilled bread of the Down Easter Wrap ($9.50) was thick and spongy; the crisp fried cod inside tasted fresh and got a kick from pickled jalapeño peppers and spicy, scallion-studded mayonnaise. A total win.

The Barnyard Burger ($9), made with meat from Northeast Family Farms, was passable and monolithic — about three-and-a-half inches high when perched on its brioche bun. Though the slices of bacon that crisscrossed it were slightly rubbery, the accompanying garlic aioli nicely slathered up the whole thing.

That aioli was also the perfect accessory for Blue Stone’s praiseworthy French fries — salty, firm and fried so deeply that those evil-but-scrummy, translucent pockets formed at each end.

After all this sampling, the food at the Blue Stone was starting to seem like a paean to ginormousness. Still, we braved a sour-cherry tart topped with a smear of mascarpone ($5); it was too treacly for me but still light and citrusy. Too light, though, was the coffee — you could almost see through it to the bottom of the mug.

Leonardo da Vinci reportedly said that simplicity is the greatest sophistication. The Blue Stone certainly does the simple things best — basic pizza, French fries, salad. The menu here will change with the seasons, the owners say, and, no matter what any critic writes, the place will probably always be buzzing. It’s spacious yet enveloping, reasonably priced yet decent, and it fills a middle niche in this increasingly busy town — many skiers love pizza and beer after the slopes. But it might be wise to remember that less is more.

The print version of this article was headlined "Red, White and Melted All Over".