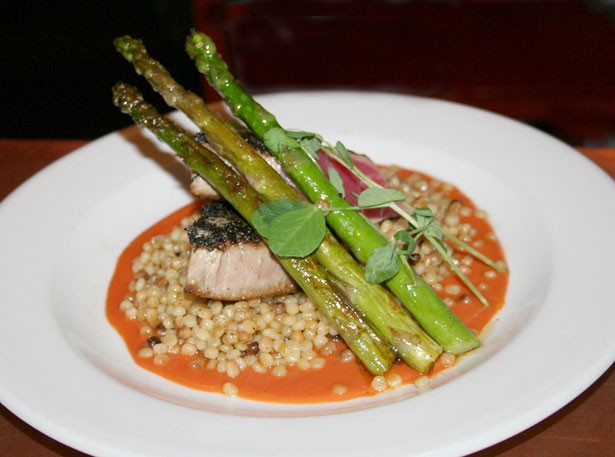 If you think of White River Junction as a place to hop off the highway for a bathroom break and a fast-food burger, you may want to give it another look.

The tiny village, located within the town of Hartford in Vermont's Upper Valley, declined after the interstate system replaced the trains that used to bring passengers, and bucks, to area businesses. But over the past decade the locale - which lies at the intersection of I-89 and I-91 - has been experiencing a creative-economy renaissance.

In 1997, the Northern Stage company relocated to White River and made the Briggs Opera House its permanent home. The group has drawn such distinguished guests as playwright Arthur Miller and performer Patrick Stewart. In 2005, the Center for Cartoon Studies opened its doors to a small crop of up-and-coming illustrators and storytellers.

And where there are students and theater-going crowds, funky eateries are sure to follow. White River may once have been a Budweiser town, but now it boasts Elixir Restaurant & Lounge, a martini and tapas bar serving upscale comfort food - think lobster mac 'n' cheese and Kobe beef sliders - in addition to classy drinks.

And then there's the Tip Top Café, which is part of an arts complex in the center of town. In 2000, Matt Bucy - an architect, engineer and artist - purchased a dilapidated former bakery called Tip Top and refashioned it into a center for the arts. Today, 40-some painters, sculptors and photographers have studios in the maze-like building, which mixes vintage and modern styling.

Before showing up at the restaurant for a 6 p.m. reservation, my dining companion joined me in The Cooler Gallery - so named for the former bakery's walk-in refrigerator - to check out an installation of works relating to "walls," and to examine a few artsy tomes and chic lamps, dishes and jewelry. Then we wandered by a series of studios, stopping to examine a selection of prints on sale via the honor system. After a brief turn around a paint-your-own pottery shop, we arrived at the café's front door and were promptly shown to our table.

The menu at Tip Top, which bills itself as "an upbeat American bistro," is small and eclectic, and the average age of the waitstaff skews towards middle-aged rather than twentysomething. The service was serene and polite. Other patrons ranged from families with children to couples. The warm, contemporary décor, large white serving dishes and sleek, bullet-shaped salt and pepper shakers give the place the feel of an urban museum café.

Before ordering apps and entrées, I tried one of the resto's specialty drinks, called a "Black Martini." The wine-colored combo of Absolut Raspberri and Chambord, garnished with a bit of orange peel, proved pleasant, but too sweet to drink before dinner, or with it. It came at the same time as a warmed wooden tray holding slices of bread - which, judging from the darkened bottom crust, looked like it had been baked in a wood-fired oven. It came with a dish of garlicky, emulsified olive oil spread.

My partner wanted to order the sweet-potato-and-apple fritters with chipotle dipping sauce, but I overrode him in order to sample something called a grilled Caesar salad - long leaves of romaine with a bit of char around the edges, topped with crouton bits, garlicky dressing and Parmesan. Sadly, no anchovies were offered. The smoky flavor imparted by moments on the grill was tantalizing and unusual, and elevated the dish above the ordinary.

This was followed by a pair of monster-sized shrimp lightly coated with salt and pepper and served with a dish of sweet 'n' tangy jalapeño dipping sauce. The red-cabbage slaw on the side had a bitter bite, and the shrimp, while impressive in size, weren't as sweet or tender as smaller ones might have been. Still, the dipping sauce was zesty and the immense prawns were a novelty.

We shared two entrées, the first of which was a Vermont-y version of risotto. The creamy rice was blended with cheddar - the orange kind, we guessed from the color of the finished dish - and strewn with bits of thick-cut bacon and tender cubes of butternut squash. A drizzle of apple-cider-reduction sauce surrounded the toothsome mound of rice. Alone, it was heavy on the carbs: A side salad would have been a nice accompaniment.

Next came a steak that was seared dark on the outside but was a perfect, juicy rare within. It came on a bed of mashed potatoes topped with crisp strips of fried leek and a few verdant spears of asparagus. Surrounding the whole was a pretty puddle of subtle paprika-cream sauce. A few sprinkles of salt helped bring out all the flavors. A glass of Syrah, suggested by our server, was a nice match for the meat.

For dessert, we opted for a hefty wedge of cinnamon-scented bread pudding with a thin, whiskey-caramel sauce on the side and a slice of ultra-creamy, Key Lime cheesecake. The former was sweet and homey, while the latter had just the right balance of sweetness and citrus-y zip.

Even though we had worked our way through much of the menu, the pre-tip total on our bill was a reasonable $83. White River Junction may not yet be a dining destination, but the funky town's growing rep for affordable arts easily extends to its eats.