Taste Test: The Lobby in Middlebury 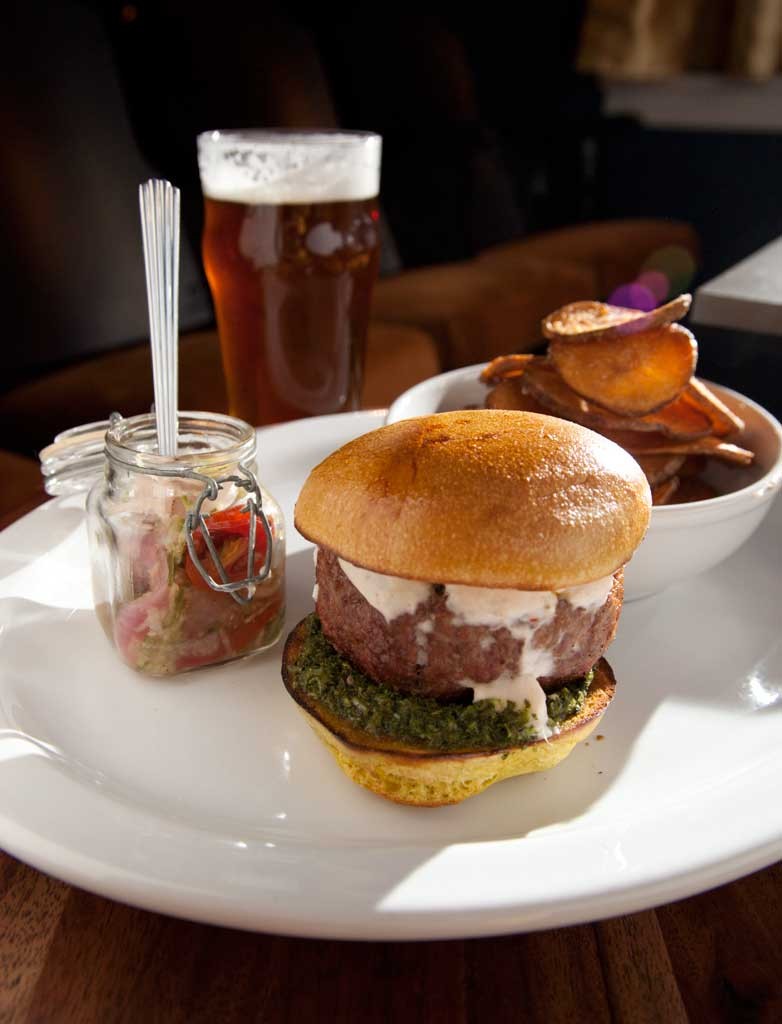 Music criticism deals with the auditory. An art review critiques the visual. Judging a restaurant's merits encompasses all the senses. Do the sights of the food and décor delight? Do the smells wafting from freshly plated dishes tantalize? How are the textures and flavors? Even the relative din or hush of a dining room can make or break an evening. But most critics ignore another category of sensory experience altogether: the sense of fun.

Michel Mahe's latest restaurant, the Lobby, wouldn't let me forget that asset. With a whimsical menu that leans heavily on upscale classics in hamburger form, and uncommon decorations by Rebecca Duffy of Rebecca Designs in Vergennes, the new restaurant stands out from the usual suspects in Middlebury's dining scene. Though the bill of fare is extensive, it was clear from both my visits that those burgers were the runaway hit. And with good reason: Mahe and chef de cuisine Jeff Trump seem to have found a winning formula.

Mahe is the prolific restaurateur behind the Black Sheep Bistro and Park Squeeze in Vergennes, the Bearded Frog Bar & Grill in Shelburne and the Bobcat Café & Brewery in Bristol; he recently closed a fifth establishment, Next Door Bakery & Café in Shelburne. Despite Mahe's many projects in Chittenden and Addison counties, the Lobby is clearly the beneficiary of his full attention. Nearly every corner of the restaurant's three floors offers a sensory delight.

Outside, on Bakery Lane, a vertical sign spells the restaurant's name in lights that would befit an early-20th-century movie theater. That's precisely where diners may think they are when they enter the restaurant and find a lounge filled with rows of velvet-covered seats recovered from a 1920s movie house, facing small round tables.

Barflies can relax there or at the bar proper, which boasts its own eccentric seating — tall chairs stenciled with the names of vintage cocktails. The dining room spans three levels, with tables on the main floor and on the sunken lower level, where tall windows offer a view of the flowing Otter Creek. Smaller groups of diners can be seated on the top floor, which overlooks the lower ones through an atrium. From opposite corners of the ceiling, a pair of antique seraphim trumpet to the diners below. The walls are painted dark blue, with a central one filled with projections of food photos from the 1940s and '50s — mostly of children eating messily.

My first visit to the Lobby was for a late Sunday lunch. We were seated on the Otter Creek side along with several young families. Based on the menu, a burger was the obvious choice, but which one? Would it be the Turkey Cordon Bleu, a bacon-and-Brie-stuffed turkey burger with herb gravy on a cranberry-oat bun? Or perhaps the banh-mi-style pork burger with chicken-liver mousse and cilantro?

Not that day. A gentleman seated nearby was raving about his filet mignon burger, and I had to try it.

The creation tasted like my childhood in a bun. From the time I was 6 or 7, my favorite special-occasion meal was filet mignon with Béarnaise sauce. The Lobby's sloppy burger offered an equivalent to the steak in the form of melt-in-your mouth ground beef, along with well-executed, buttery Béarnaise. Thinly sliced, sautéed mushrooms lent the soft burger some chew. The only minor letdown was the Bristol Bakery & Café bun, tailored specifically to the burger. Though delightfully fluffy, it didn't reveal the sweet, caramelized onion taste promised on the menu.

The accompanying "fried potatoes" were just that: thin coins sliced from whole potatoes, then fried. Though nicely seasoned, the potatoes couldn't seem to decide on a texture. Some were floppy, others crisp. A miniature Mason jar filled with cucumber-onion-tomato relish was a refreshing aside, but not a perfect match for the filet burger. Buns at the Lobby are custom made to each burger; perhaps in the future the mini salads will be designed as pairings, too.

It was a pleasant surprise to find that the lunch menu included a range of grilled-cheese sandwiches not available at dinner. I very nearly selected one that paired Manchego with homemade country pâté, roasted brussels sprouts and cranberry mayo.

But I couldn't resist the even more unusual combination of creamy Brie with fresh raspberries, balsamic reduction and house merguez. Strangely, the combination hit a flavor profile similar to that of an exceptionally well-balanced pepperoni pizza, with the merguez — tangy, lightly spiced lamb sausage — standing in for the classic cured-pork offering. The crusty bread was grilled panini style, giving the balsamic and stray ends of cheese an opportunity to caramelize seductively at its edges.

A small salad of dressed greens might have been a pleasant respite from the heavy sandwich, but a topping of fried onions in place of croutons negated the effect. That didn't stop me from crunching through them with aplomb. 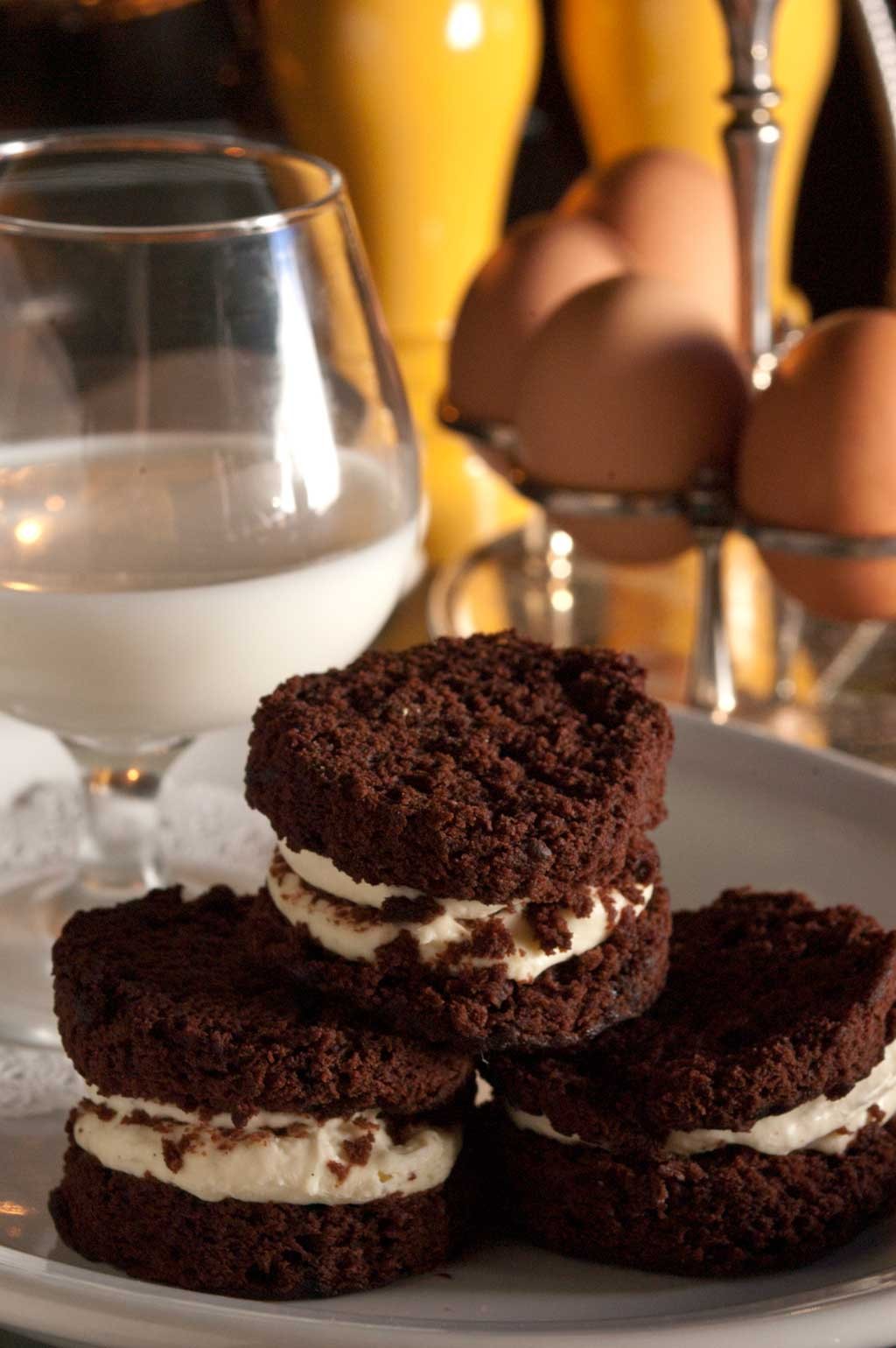 Lunch ended with Mahe's version of Oreos. Since my dining partner and I were sharing, our pleasantly chatty server was kind enough to bring two glasses of milk to wash down our three "cookies" constructed of chewy brownies and sweet vanilla mascarpone. The portion was awkward for splitting, but it worked. Between the burger and the grilled cheese, neither of us could have taken another bite.

Later that week, we headed down to Middlebury for an early dinner, planning to fit in the pub quiz at nearby Two Brothers Tavern afterward. At 5:30 p.m., we found ourselves waiting in a three-party line. Clearly, the Lobby was proving to be Middlebury's new hot spot.

We were seated on the balcony, where I could observe what nearly everyone else in the restaurant was eating. Burgers were again the order of the day, but I had cured meat on my mind.

Chef de cuisine Trump's charcuterie plate for two is the first I've seen of this trend in the Middlebury area. Presented on a wooden board with slabs of grilled bread, spicy mustard and cornichons, the shared plate looked like the epitome of fun dining but lost much of its attraction when we dug in.

Duck pastrami was served in short shreds, tiny portions that couldn't hide the violent doses of seasoning on the spongy meat. An extra-large dish of chicken-liver mousse could have benefited from some of that salt.

Thick triangles of pâté de campagne were all luxurious fat and tender meat, just as they should be. A single small patty of merguez was just as complex as it had been on the grilled-cheese sandwich. If only there had been less of one and more of the other. Though both pâté and sausage were excellent, the balance was off.

To cut through that fatty flesh, I ordered a Blue Otter cocktail. The drink, served in a tall cylindrical glass, was more purple than blue, and vividly so. A mild burn of Smugglers' Notch Distillery rum was all that diluted the bright colors and flavors of a blueberry-mint purée. Perhaps the cocktail would be a better fit for summer, but I had no complaints on a snowy day.

Ordering another burger was a must. Since I so loved Trump's way with ground lamb in the sausage, I tried the Moroccan-spiced lamb burger. This time, the bun tasted just as advertised, with a whiff of yellow curry. This was merely the base of a burger that boasted the complexity of a fine-dining entrée.

The spiced lamb patty was cooked precisely to my requested medium and flavored almost identically to the kefta at my favorite Moroccan butcher shop in Montréal. It was bathed in a layer of harissa-spiced yogurt. But the touch of genius was on the bottom bun. Bracing mint pesto enlivened the already spice-filled sandwich, just as mint raita adds an exhilarating coolness to a spicy Indian dinner.

I had planned on ordering our other main dish from the entrée menu. But, while duck-leg cassoulet and seared scallops with lobster cream appealed, the selection of entrée salads proved even more alluring.

A pile of Bibb lettuce tossed with grapefruit sections and shaved red onion in a citrus vinaigrette easily balanced sweet, sour and bittersweet flavors. Crisp, tangy haricots verts were angled jauntily on one side of the plate, more grilled bread on the other.

The salad's centerpiece consisted of duck tenders piled beside a scallop pattern of the yellow-orange dressing. The breaded-and-fried duck hit the satisfaction centers in my brain exactly where a Burger King chicken tender would, but with real, moist meat and without the embarrassment.

The salad was a success, but I would have liked it even more with one or two fewer elements.

Such reservations aside, part of the fun of the Lobby is its excess. From its unapologetically quirky interior to its big flavors, the restaurant serves diners a dose of heightened reality. If they're anything like me, they'll keep asking for more.

The original print version of this article was headlined "Theatrical Tastes"